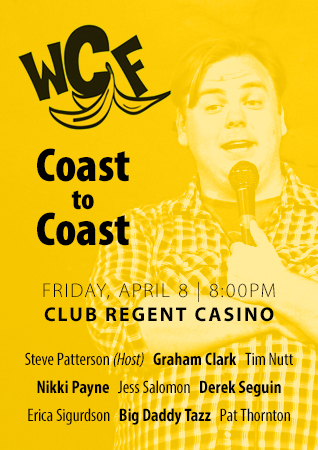 ShowbizMonkeys.com is once again giving away tickets to the Winnipeg Comedy Festival, which runs from April 3-10 this year. It's the big 15th anniversary for the festival, and they're pulling out to stops to bring you some of the biggest stand-up comics in Canada, along with some international acts and the biggest group of local Winnipeg stand-up, sketch, and improv comedians the festival has ever seen. This year, we have 8 pairs of tickets to give away to one of the best line-ups of the festival: "Coast to Coast Comedy", taking place Friday, April 8 at 8:00pm at the Club Regent Event Centre. Hosted by The Debaters' Steve Patterson, the show features comics from all across Canada, including Graham Clark, Tim Nutt, Nikki Payne, Jess Salomon, Derek Seguin, Erica Sigurdson, Big Daddy Tazz, and Pat Thornton.

For your chance to win, fill in your name, your info, and an answer to the skill-testing question in the Entry Form below. And keep your eyes on ShowbizMonkeys.com over the next couple weeks as we've got interviews coming with Sigurdson, Pete Johnasson, Andy Kindler, Sean Cullen, and a cool special feature we're filming during the festival with Simon King!