When I was in school, a teacher would sometimes catch me doing something I wasn't supposed to be doing.

Whenever they'd ask, "Michael, what are you doing?"

"Just putting on the second coat now!" was always my favourite response.

Once in a while someone would get the reference but most would have a look of befuddlement. Either way, I would always follow the response with a smile and be on my way.

The Back to the Future series was a big part of my childhood. These were my Star Wars. As much as I love George Lucas's original space opera trilogy, I was too young to have seen any of them in the theatre. BTTF was one of my earliest movie theatre going experiences. Honestly, I barely remember anything about that first viewing. The only thing I took away from the experience was learning that Ronald Reagan used to be an actor.

Actually, I do remember one other thing: the reaction of the audience during that famous scene. The packed house at the old Odeon Cinema (now Burton Cummings Theatre) in downtown Winnipeg erupted in laughter and applause. 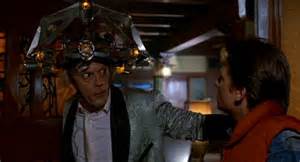 Doc Brown: Okay future boy, tell me something. Who's President of the United States in 1985?

I didn't get the joke. Why was everybody laughing? Is it funny that the president used to be an actor?

There's a magical period in a young person's life when the movies you watch, the books you read, and the music you listen to is at its most powerful. It's the period when your imagination is open-minded enough to be able to immerse yourself in any story. The brain is developed enough to begin to understand more complex ideas but naïve enough to remain in the moment. Over the course of my life, I've revisited the adventures of Marty McFly and Doc Brown too many times to count, but it peaked during that sweet spot in my life between late childhood and mid adolescence. After the sarcasm, but before the cynicism.

I was at my most vulnerable to the stories I was experiencing on film because I hadn't enough life experience yet. At this age, my life experience was predominantly vicarious. These stories were teaching me about the world. 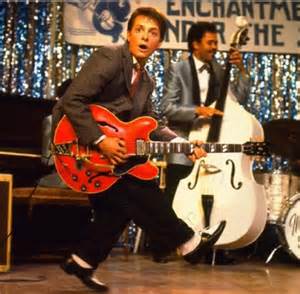 My elementary school would have an annual air band competition where students would lip sync to popular songs in the gymnasium in front of the entire school and staff. While everyone else was performing Bryan Adams, Paula Abdul, and C+C Music Factory, me and my buddies rocked out to Johnny B. Goode, complete with my own duck walk. The song wasn't old school to us, because in our minds, Chuck Berry didn't invent rock 'n roll, Mart McFly did. The Roman Catholic judges voted us first place.

Last week's Back to the Future Day was a unique occasion because it's a day that will never happen again. Unlike anniversaries which celebrate milestones every couple of years, Back to the Future Day will and should only be celebrated once since October 21, 2015 will never appear on our calendars again. So I had no qualms about the overwhelming, sometimes awesome, sometimes lame response on social media.

New movies I watch as an adult still have the power to move me to tears. More life experience has expanded my ability to empathize. I relate to and understand more things I see on screen. But I don't get the attachment to the material as I did when I was an adolescent.

So was all that hoopla last week because of a bunch of thirty year olds with attachment issues?

Not sure if this answers the question, but as an adult, I can only wear Calvin Klein underwear.