It's been a two picture race since last fall between 12 Years a Slave and Gravity. 12 Years a Slave has always been seen as the front runner, but in recent weeks Gravity's popularity has been increasing. The movie with the most nominations, as Gravity has, wins the majority of the time. And it makes sense, because having lots of nominations shows there's tons of support within the Academy for the film. In recent years, however, that theory has lost some value. While Argo and Life of Pi won Best Picture and Best Director respectively last year, it was Lincoln who actually had the most nominations. And did anyone actually remember that Hugo had more nominations than the Best Picture winning The Artist?

So what does that have to do with this year?

Well, as the night unfolds, Gravity will most certainly (and deservedly) pick up a slew of technical awards. And it will seem like it is poised to take the Best Picture Prize. However, I still think 12 Years a Slave will take the top prize.

Gravity is a groundbreaking film. It pushes the envelope in directions the medium has never seen. Its inventive camera work is worth noting; its use of 3D to create a heightened realism is ingenious; and its seamless blend of CGI and live action is admirable. I also found it to be a poetic meditation on life. It deserves to win Best Picture on its technical merit alone.

Groundbreaking films DO NOT win Best picture. Ask Orson Welles, Stanley Kubrick and Alfred Hitchcock. And while you're at it, see what George Lucas and Quentin Tarantino have to say on the subject.

Citizen Kane, Psycho, 2001: A Space Odyssey, Bonnie and Clyde, Star Wars, Pulp Fiction, Toy Story, and The Matrix are just a few (among many others) revolutionary films that have pushed the conventions of film in a forward direction and have become some of the most influential films of all time. Not one of them won Best Picture.

Yes I know, Star Wars and The Matrix scooped up a bunch of technical awards and Quentin Tarantino and Orson Welles both won for their Original Screenplays – sort of a "runner up" prize. But, the truth is, none of these won the big prize: Best Picture.

Because ground breaking films don't win Best Picture. Important films do. Groundbreaking films don't become important until years later when we can look back on it and reflect on its influence. In the present moment, Gravity is the odd man out. 12 Years a Slave is king.

Matt Damon was once famously quoted as saying he believes the Academy should award its Best Picture five years later. That would allow time to determine which films still resonate, and thus, which should be awarded the "Best".

The more I think about it, the more it makes sense. And I don't blame the Academy at all. I have trouble myself knowing how good a movie is until at least a few days after I've seen it. One of my barometers of the quality of a movie is how much I'm thinking about it a week later. If I'm still thinking about it, that's a good sign. There's nothing I hate more than someone asking me what I thought about a movie as I'm exiting the theatre. How can I tell at that moment? I just saw it! I need time to absorb it. What can I say, I process information slowly. It makes for the occasional awkward first date. I'll usually just resort to a classic, "It was pretty good." And leave it at that. 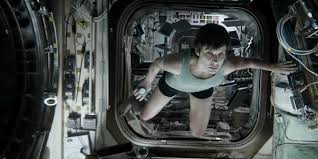 It's impossible to know what will be remembered years from now or what film ends up being influential. So how does the Academy counter that? By picking the important movie.

Now that's not to say 12 Years a Slave is an undeserving film. Heaven's no, it is one of the best of the year. And I would not be disappointed if it wins. What makes it significant is it's a painfully evocative first person account of slavery. Finally Hollywood has given a face and a soul to a period that allows viewers to feel and literally experience what it was like. It's a Diary of Anne Frank for Slavery.

Wouldn't that be something? If 12 Years a Slave and Gravity tied for Best Picture? They tied this year for the Producers Guild Award as the Best Film of the year so it's not as big of a stretch as one might think. I'm all for surprises at the Oscars so I would totally love this.

But if I was a betting man, I would still bet on 12 Years a Slave. Can you think of a reason for it not to win? Nobody can, it seems. In fact, nobody wants to say anything bad about the film at all. Where some people may have scrutinized the technical accuracy of Gravity's portrayal of outer space, I have yet to hear one person say anything negative about 12 Years a Slave for fear of offending the reputation of the film. Was I the only one who thought it was a little slow at times?

12 Years a Slave has accumulated this aura in the vein of Schindler's List as a film that people are afraid to dislike.

And it's the real reason why I think it will win Best Picture. The Academy is afraid to vote against it.

I think the films included are very strong this year. I was happy to see Her, Philomena, and Dallas Buyers Club included in the mix. I would have loved to have seen Before Midnight or Frances Ha there too, but why carp? It's still a strong list. Sure, some I liked more than others, but there's not a film that I truly disliked. I personally don't care who wins Best Picture. I have my favourite, Gravity, but if 12 Years a Slave gets its name read at the end of the night, it doesn't change anything for me.

I'm always a fan of variety. I love the fact that the list of Best Pictures is such an eclectic mix. To determine one as better than the other is beyond the point. To celebrate all these vastly different types of films together on the same night just shows the unlimited potential of the medium.

Besides, the most important award is who wins Best Dressed, right?