Born out of a mutual appreciation for each other's contributions to Canrock's indie canon, Tommy Hawkins is a spirited side-project that pools the eccentric talents of multi-instrumentalists Thomas D'Arcy and Hawksley Workman. Described by the duo as a series of "simmering mid-evening jams," Tommy Hawkins' debut EP Amy features six new songs that aim to please both new listeners and longtime fans alike.

The jolting "Love Will Destroy Who It Wants" kicks off Amy with D'Arcy's frantic wails coming through Workman's tommy-gun drums and winking, spandex-clad guitar licks. Like the first (and biggest) hill on an amusement-park rollercoaster, "Love Will Destroy..." is easily Tommy Hawkins' most feisty offering, building the momentum that sustains the rest of their EP through a steady stream of sonic peaks and valleys.

Amy's subsequent tracks find D'Arcy and Workman creating a lively, effortless dialogue by trading off both instruments and vocals, while providing a master class in musical texture and dynamics, from sparse drums or piano to soaring wall-of-sound crescendos that could double as a film soundtrack. Likewise, Amy showcases both artists' distinctive but complementary yelps and croons, the ping-ponging chorus on "That's The Way I Walk" serving as a particularly fun example. 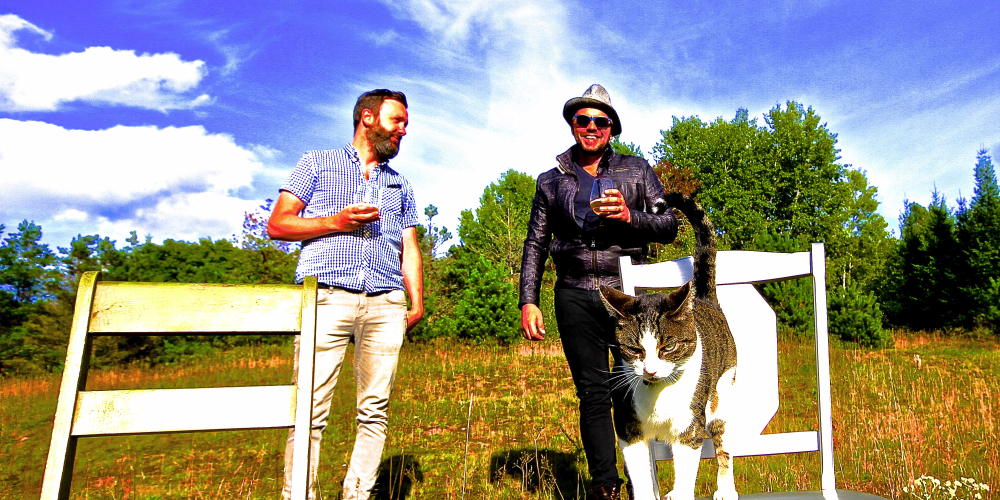 The EP also boasts a great attention to rhythm, with each track lulling the listener into an infectious groove only to throw in an off-kilter backing vocal, electronic blip, or guitar squeal that sounds like it's trying to get away with murder, for a laugh. To keep us present, Tommy Hawkins seamlessly fuses these unruly elements with something more recognizable from each performer's repertoire; the cabaret-inspired piano on "The Best of Me" will delight old-school Hawksley fans, while "Don't Make A Mess of Our Love" invokes the 00s indie-rock sensibilities of D'Arcy's former band Small Sins, complete with a buoyant synth line and catchy hooks.

As signaled by the project's moniker (an amalgam of both artists' names), Tommy Hawkins' melodically dazzling EP supplies a truly collaborative cacophony of tunes that will turn off all your instincts.

Tommy Hawkins' Amy is out now from TDM/Fontana North. You can find it on iTunes and Google Play Music. Follow Tommy Hawkins on Twitter at @Tom_Hawk_Band.

Nyala Ali reviews comics and graphic novels for the Winnipeg Free Press and has dabbled in feminist comics criticism for the online magazine Women Write about Comics. When not sitting at her computer writing, she sits behind a drum kit playing post-punk or indie-pop beats around town. (@nyala_ali)