The Sky is Everywhere

The Office: The Search

The Search is the result of the car ride disaster running joke, and Jim's irrational overreaction in parenting. Instead of Dwight accidentally cutting himself with a pop can, Michael was abandoned at a gas station after Jim received a distress call from his mother in-law, leaving Michael alone to find his way back to Dunder-Mifflin. Michael's character is best when he plays off the other characters, as opposed to when he is left fumbling on his own. In this episode, he was aimlessly wandering the streets, and attempting to frequent businesses while not having any money on him. His worst moment came when he had a moral dilemma at the Chinese food restaurant, as he decided that he did not want to dine and dash. The funniest part of this episode, was when the camera zoomed into the wall of shame, only to show that both Michael and Creed have Polaroids not too far from each other.

The raison d'être of this episode was on why and how Michael and Holly got back together. While looking for Michael, Holly demonstrated that her mind functioned so much like Michael's, that Dwight could not help but use her as a homing device to locate Michael. In searching for Michael, Dwight reprised his role as the loyal employee, and Erin began to understand what Michael saw in Holly.

Meanwhile at the office, everybody was demoralized by Gabe, season six's most useless contribution to the series. Gabe is just a bad character all together, and having everybody unite against him still does not justify his presence on the dhow. All he does is intrude into the business of the employees with predictable ramblings about Sabre. Gabe is boring, does not succeed at being a foil to Michael, and the show would not suffer even if he was written off, as he has nothing to offer. 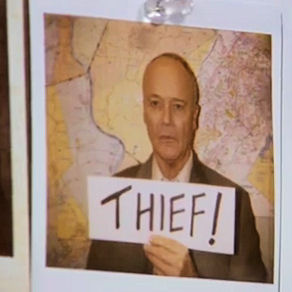