The Client was one of the best episodes of The Office in accurately and fully representing Michael for who he is. In the main plot, he singlehandedly saved the branch with his phenomenal sales skills, and ended up spending the night with Jan. When Michael wanted to tell jokes, Jan limited him to just one, and he ended up phoning Pam to get a joke from his joke book. As Pam went through his desk, she also discovered Michael's movie script, which the employees then mockingly played it out in the meeting room. This script was none other than Threat Level Midnight.

Five years later, the movie has been completed, and once again Michael's need for acceptance was on the line. He created Threat Level Midnight so that he could be Agent Michael Scarn, the man he could only dream to be. In theory, Scarn is the person that everybody from women in a bachelorette party to the president have great admiration for. But in reality, Scarn was somebody that everybody at the improv group wanted nothing to do with. The first time Michael showed Threat Level Midnight to the employees, Michael was unintentionally laughed out of the meeting room, as his employees mistaked the movie for a comedy. At the time, Michael had clearly not gained the respect from his employees. This was due to the fact that Michael was that much more villainous and hated by his employees as a result of his desperately overcompensating tendencies. Pam was quite aware of Michael's sensitivity, which was why she briefed everybody before the movie started.

However, Jim had difficulty keeping a straight face. He had the worst role in the movie, in which he had to paint his face, and threaten to dig Catherine Zeta-Jones up from the grave to hump her. The talking head segment in which he talked about why he participated in the movie was a nice touch, as it broke the incongruity as to why anybody would want to have a role in the movie.

Jim's second crack happened immediately following Packer's only line, "If doing the Scarn is gay, then I'm the biggest queer on earth!" Michael reacted by looking for positive feedback from Holly, and shutting off the movie, thus making all the employees return to work. Phyllis dropping the popcorn is classic The Office symbolism that also cleverly doubled as insult to injury. The next two scenes involving Michael's fight with Holly, and the reconciliation during the Goldenface origin story (about working for a boss that only cared about profit) were critical to Michael's character growth. After returning to the meeting room, Michael was a more mature person that laughed at his own movie, and learned to be able to rely on himself to determine the worth of his movie and himself.

The episode itself is filled with lots of referencial gems, that only the most dedicated fans of the show will notice. In the flashback scene, Ryan is wearing his old clothes, and sitting at the front of the room. Jan singing is actually a real life homage to Melora Hardin's other career as a singer. The scene on the ice rink is a reference to the Winter Olympic promo and the hockey career sacrifice Michael made that did not pay off. Michael using work time to show a movie is also a reference to the time where Jan walked in to find that the employees were all sitting in the meeting room watching a movie.

As for the movie, it is exactly the sort of product that Michael would dream of. Michael is the type of person to mistake all of Hollywood's bad clichés and crap to be good, to the point of copying and pasting it into his own movie. The combination of this Hollywood derivative filth and Michael's mind, made for some hilariously awful scenes. Michael really believes that an unorthodox training montage scene, shooting akimbo style, and the flashback to the deceased mentor to trigger the plot climax, are all elements of great cinema. But making a bad low budget movie is actually the very intent of this episode. This episode is actually using Michael as a vehicle to parody some of the dumbest things that have ever appeared in movie theatres, and sending out the message of how the masses have embraced bad movies, while not knowing that they are bad. To take it one step further, it is not just a critique, but also a way of pointing out the uniqueness and realism of The Office. 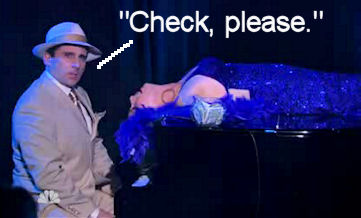 This is an episode that I would love to see somebody like Jeremy, Elizabeth, or Mike review.