This episode had an excellent script, which really set it apart from the rest of the episodes of the last two years. This is expected, as it was Steve Carell's final regular appearance, and the episode was written by Greg Daniels. The acting was some of the best of the series, and it really came out as Michael held back emotionally, as he went to each employee to say farewell. By doing this, the episode turned into a retrospect of how Michael touched his employees' lives, as references to the past were cleverly dropped along the way.

Phyllis - Michael and Phyllis have known each other for a long time, as they attended high school together. Whenever either one of them brings up the past, it is usually something unpleasant. This episode was the exception, as Michael told everybody, "When Phyllis was in high school, she was sooo cute. And she still is."

Stanley - "May you never lose the fun loving quality in life."

Andy - Michael giving Andy his ten most important clients was a great subplot, which became a follow-up to "Traveling Salesmen." Back in season three, Michael and Andy were paired up together on a sales call, where Andy said all the wrong things, costing them the sale. Now, it was Andy and Deangelo who went to save a client that was leaving Dunder Mifflin. The difference between these two episodes, is Andy's improvement in sales ability, something that Michael never gave up on, resulting in Andy able to compensate for Deangelo's complete incompetence and saving the account.

Kevin - "You will be thin. You won't drool over pizza like an animal any more."

Oscar - "It looks like it was made by a two year old monkey on a farm. And he just... He just accepted it, and I put all this work into it. He has the lowest opinion of me of anybody."

Angela - "Was it just me, or did you think we were going to have sex at some point?"

Toby - It looked like Toby (unintentionally) got the last laugh. Michael now has to deal with Toby's brother in their same town that he is moving to. At least Toby did not give Michael a rock.

Kelly - "If I just went away right now, would that be the best gift I can give you?"

Ryan - Ryan received the most random gift. It was almost as if Michael remembered how how much Jan hated his neon sign, and after seeing Kelly take more interest in texting than speaking with him, Michael decided to give the neon sign to Ryan. On top of that, Michael saw the sign as something that is for a bachelor pad.

Darryl - Darryl's best episode of The Office was "Safety Training." In this episode, he had to convince Michael not to jump off the roof, and also verbally beat some sense into Michael, as Michael thought it would be acceptable for himself to use the warehouse baler. After giving Darryl a draft copy of "Somehow I Manage," Michael had a question for Darryl. "I have one last wish. I would like to use the baler." After being denied, Michael headed downstairs to the warehouse to be denied again. Michael attempting to throw ball in the baler is an homage to season one's "Basketball," wherein he showed everybody just how bad his aim was.

Erin - After Erin dumped Gabe last episode, she came to Michael for advice in this episode. In the absence of having parents, Erin has Michael that she can turn to. Michael's altruism is demonstrated, as he wished to continue to be there for Erin, even after he moves away.

Dwight - The episode started off with the mandatory idiotic banter between Michael and Dwight. Michael spitting out food that he was tricked into eating by Dwight, is a reference to "Heavy Competition," when things got ugly between the two. Later on in the episode, Michael finally gave Dwight the letter of recommendation, which Dwight read during a talking head segment. The letter was poorly written, yet very flattering, triggering Dwight's softer and thankful side. Dwight moments like these are seldom seen, and show a different side to his character. He then found the card, inviting him to a game of paintball behind the building. The paintball is a reference to Dwight's Christmas present in season two, and of the 40 Year Old Virgin sign getting shot by paintballs in the bloopers.

Creed - Creed had a couple of great moments in this episode, such as him continuing to use the women's restroom (as first seen in "Women's Appreciation"), and taking Michael's cup. Michael's words, as he tripled up were, "Whether you are scared of dying..."

Jim - After picking up on Michael asking about Pam, and checking on Phyllis and the mittens during the conference room meeting, Jim responded by giving his look at the camera, and asked to talk to Michael alone. "You're not leaving tomorrow. You're leaving today, right?" The way Jim said goodbye was totally in character, and made it significantly easier for Michael to move on.

When Michael left in his cab, unaware that Pam just pulled in, he said the following monologue. "Got almost everybody. So. Holly's my family now. She's my family. And the babies that I make with her will be my children. The people that you work with are, just when you get down to it, your very best friends. They say on your death bed, you never wish you spent more time at the office. But I will. It's gotta be a lot better than a death bed. I actually don't understand death beds. I mean, who would buy that?"

Michael's story on The Office ended quite a bit differently than David Brent's did on the BBC version of the show, but the American version made sure to throw in a references to the original. The scene in which Pam caught up to Michael at the airport, and the words are inaudible, was an homage to the BBC scene (in Series 2, Episode 6; "Interview") where Dawn was leaving, and Tim took off his microphone to talk to her.

As Pam watched Michael's plane lift off, she had this to say. "No, he wasn't sad. He was full of hope. About Colorado. And he was hoping to get an upgrade as an awards member. And he said he was just really excited to get home and see Holly." 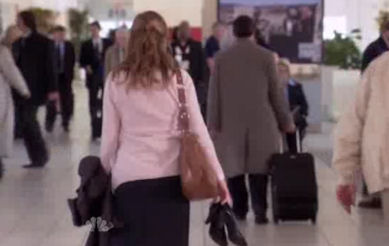 I've heard people suggest that bringing up both Phyllis giving up a baby and Erin not knowing her mother might mean that we'll eventually find out that Erin is Phyllis' daughter.

What are your thoughts on that?

That would be just a little bit too weird.