Today is April 5, 2012, the twenty fifth anniversary of FOX Network. In these last two and a half decades, we have seen a lot of shows come and go. Some were successful, and some were not. But one thing the network was not afraid to do, was to innovate. In this article, I am acknowledging FOX's contributions, by writing of my five favourite FOX television shows. 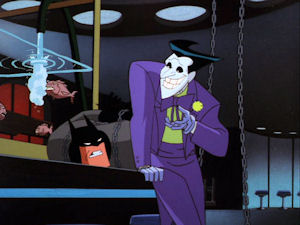 Batman: The Animated Series was one of the reasons why the nineties were the golden age of animation. The visuals, being influenced by both the Tim Burton movies and the style of 1940s comic strips, gave the show a timeless feel. The characters, especially the villains were more than just bad guys breaking the law. The show went deep into the minds of the villains, to show what made them tick, and portrayed them not just as human, but actually likeable despite their flaws. The stories were mature, the voice acting was top notch, and the show proved that cartoons were not just for kids any more.

The most important contribution. 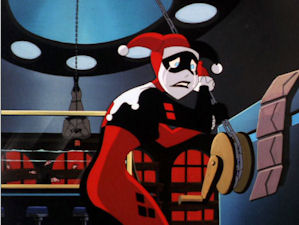 Proof of the show's enduring legacy came in the form of the loveable henchwench, Harley Quinn. She was an original character created by this animated series, who is now known just as well as any other Batman villain. Voiced by Arleen Sorkin, Harley and the Joker, voiced by Mark Hamill, were an unforgettable on-screen duo. Whereas the Joker was pure malicious, Harley was not. She was a do-gooder staff member at the asylum, who let her compassion, low self-esteem, and poor boundaries suck her into getting manipulated by the Joker. He saw right through Harley, and he used his sentimental stories to fool her into believing that he was more victim than criminal, to the point where Harley sided with him way beyond what her job duties entailed. In "Mad Love", Harley came closer to defeating Batman than any other villain ever did. A shackled and hung Batman resorted to exploiting Harley's need for approval from the Joker, in order to escape from what looked to be certain death. The real tragedy came in the form of a villain being defeated by their own decency and their caring of another person's opinion. Very seldom, is a villain ever portrayed in as complex as a way, but in Batman: The Animated Series, it was the norm. The fine tuning of all the characters was what made the series do endearing, and Harley's continued popularity is evidence of this. 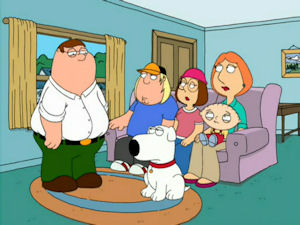 The ultimate low brow humour show. Offensive, and even completely stupid at times, but always entertaining. Family Guy is also one of the very few shows ever, that actually managed to get better with time. As the seasons went by, the show relied less on cutaways, and became more surreal, artistic, and even intelligent. 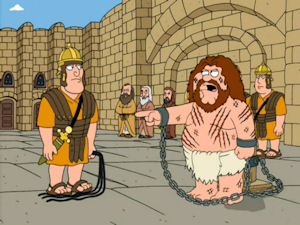 After Family Guy was cancelled from FOX, the show actually became more popular. Late night reruns spiked the sales of Family Guy DVDs, forcing FOX to not ignore the possibility that Family Guy could actually be a successful show. This was a key moment, that proved that viewers actually had some real say in determining the outcome of a television show after it had been cancelled.

The above two pictures were screen captured from "North by North Quahog", the first new episode to be broadcasted after the show was brought back after getting the axe. The image of Peter parodying a scene from The Passion of the Christ was the first cutaway gag from this episode. The juxtaposition of Peter as Jesus Christ, tomorrow being Good Friday, and me using the subheading, "The Resurrection," are all coincidental. 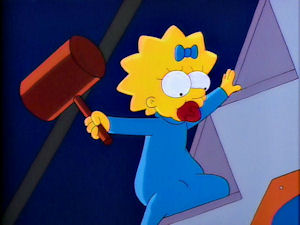 Just about everything that needs to be said about The Simpsons has already been said. The Simpsons have gone from some little side show on the Tracey Ullman Show, to becoming a part of our very culture. But before that happened, The Simpsons had to face the menace of its detractors.

Giving the finger to the critics. 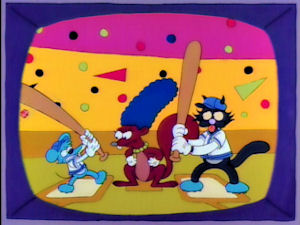 When The Simpsons became episodic, it was an instant success. But along with this success, were countless so-called experts that hated the show. They kept on and on about how Bart Simpson was setting a bad example for children, and that the younger generation would end up as proud underachievers, who would tell other people to eat their shorts. These detractors contended that censorship and the cancellation of The Simpsons was necessary to protect society's children from being corrupted by television.

The writers of The Simpsons were very much aware of this outcry, so they made fun of it in Itchy & Scratcy & Marge. After Maggie pummelled Homer with a mallet, Marge discovered that her youngest daughter learned this behaviour from watching cartoons. Marge then went on an angry crusade to get the violence out of Itchy and Scratchy. After national attention had been created, the pressure forced Itchy and Scratchy into losing its violence and humour. And as an added bonus, children all across Springfield voluntarily shut their televisions off, so that they could play outside. This all seemed to work out great, until Marge was called upon to lead a protest against the display of Michaelangelo's David coming to Springfield. But unlike the cartoon, Marge actually wanted to see the statue, and could not answer how she could censor one thing, but not another. The issue really came down to the right of the people to choose, which was something that The Simpsons detractors could not grab a hold of. 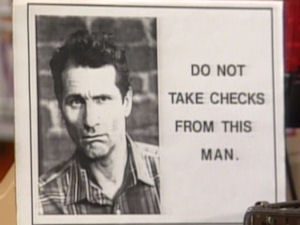 Back then, most television sitcoms were awful. It was impossible to find a sitcom that was not sentimental, and did not force some moronic life lesson down the throats of viewers. And worst of all, everybody in these sitcoms were so ideal and nice to each other. It was sickening. And then came Married... with Children, one of the original shows to appear on FOX. The Bundy family was poor, hungry, without a chance of climbing the social hierarchical ladder, and spent their time being completely nasty towards each other. It was something that television needed. 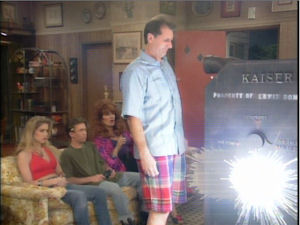 I can still remember the first time I saw Married... with Children. In that episode, Chicago was going through a heatwave, and the family wanted their cheapskate patriarch, Al (Ed O'Neill), to buy an air conditioner. He finally caved in, and bought one. But he did not just buy any conditioner. Instead, he bought an ancient piece of junk. It was a Kaiser brand of air conditioner, that once belonged to Erwin Rommell, the Nazi Desert Fox. Just look at that thing in action. 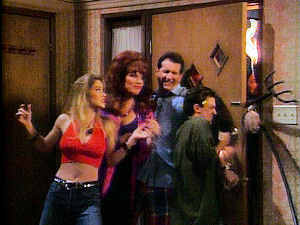 Not only did the air conditioner malfunction, it would also suck dry all the power from the block, and black everybody out. So how did the neighbours react? By instantly coming after the Bundy family with torches and pitchforks. By blacking everybody out, the Bundy family pulled television out of the dark ages. 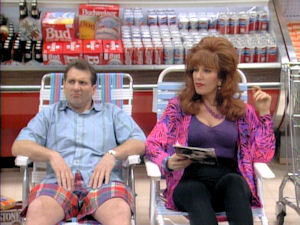 Undeterred and already accustomed by a little reoccuring neighbourhood hostility, Al took his family and some lawnchairs to sit in the supermarket to enjoy the free air conditioninng. "I wonder what the poor people are doing," he laughed. It is this kind of ingenius appeal to the less honourable side in all of us, that made me love this show. 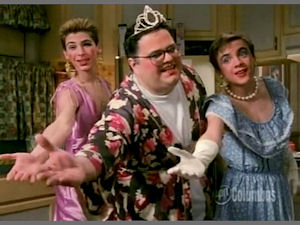 This show was one of a kind. Everything about it is magical and hilarious. The scripting, pacing, story-telling, camera techniques, the dysfunctional family dynamics, a reality that is too ridiculous to be fake, the raw emotions, the difficulties of growing up, the mindless aggression of boys, the dictatorship style of parenting, and the unrivaled attention to detail in every scene. And this is just a short list. This was a show that can not be described with words, as it needs to be watched for full effect. At the time, only FOX could dare make a show like this one.

The best stunt casting ever. 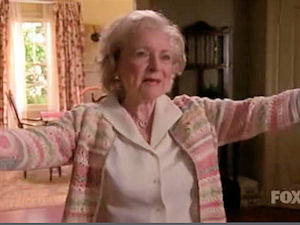 Malcolm in the Middle became known for Lois (Jane Kaczmarek), the controlling, and unstoppable mother that was not afraid of anything. So of course, her worst nightmare was her own mother, Ida, who was completely abusive, bitter, and insane. She was bigotted, put down Lois to no end, had a closet full of Christmas presents that she refused to hand out, and went so far as to hire a lawyer to sue Hal (Bryan Cranston) and Lois, because she slipped while walking out of the house. Ida was magnificently played by Cloris Leachman, portraying her as pure evil, at the expense of her family. And the rest of the family hated her back.

In "Victor's Other Family", Ida called Lois to tell her that she was coming to visit, and Lois told her that it was perfect timing because it would coincide with Ida's grandson's birthday party. Lois said this so that Ida WOULD NOT show up. But being from a hostile family also made everybody have that remarkable ability to stay one step ahead of each other. This was Lois' attempt at visiting the family she never knew, as her father, Victor, had also started a family in Manitoba (better known as the home base of ShowbizMonkeys.com). Victor's wife, Sylvia, was played by none other than Betty White, who reprised her type-casted role as the super nice old lady. She was the ideal family matriarch, who welcomed Lois with kindness. Sylvia was also the complete opposite of Ida. Just look at her, as she met Lois for the first time. It was just too perfect.

And when things were going so well, something happened. 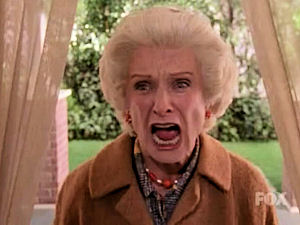 "So Lois. Are you enjoying your collaboration? Looks like you sold your soul, cheap enough. Coconut cake? From the woman who stole your father's fluids, and made bastards with them?"

This was really the best casting that could have happened. Putting the most evil old hag in one corner, the kindest old lady in the other corner, and with Lois in the middle of it all. This effect was only made possible by casting Betty White opposite of Cloris Leachman. It was not just the contrast between the two actresses that mattered. It was also the difference in lifestyle as a result of just one person, that struck a chord with Lois. But like the theme song of Malcolm in the Middle goes, "Life is unfair."