2012 Golden Globes: Winners, Losers, and Thoughts on the Globes Telecast

"So where was I?" That was how host Ricky Gervais opened Sunday's 69th Annual Golden Globe Awards, a nod to the controversy that followed his previous year's hosting gig. His inference: he was going to pick up exactly where he left it last year. He wasn't going to pull any punches. Once again, he was going to raise hell. Well, this time? He didn't. Ricky Gervais (whose film/TV/podcast work I truly love) came across slightly brow-beaten and muted, as if he had perhaps decided to choose his intended comedic targets a bit more carefully this time around. His only remotely cutting line was directed at Jodie Foster and I'll admit, it was fairly good-natured (and very funny). We've known for years, Jodie. Relax, nobody cares.

I sat through this entire uncomfortable mess. Here's my take:

The Artist (Musical/Comedy) and The Descendants (Drama) took home the top prizes in the Best Film and Male Performance categories; no shock there considering the near-fever pitched Oscar buzz attached to both movies. Meryl Streep (who seriously needs to stop getting surprised when she wins stuff) snagged yet another bit of brass for her turn in The Iron Lady, as did Michelle Williams for her portrayal of Marilyn Monroe in My Week With Marilyn. A show highlight was the warm and loveable presenter Mark Wahlberg, who genuinely sounded sarcastic when he purred: "...this uh, impressive list of nominees." Easy, Mark. This isn't the set of Entourage. Thankfully, we had the constantly grinning face of Kenneth Branagh to keep things light.

The only real (pleasant) surprises came in the forms of Martin Scorsese's win for Best Director and the absent Woody Allen's for Best Screenplay. Hugo and Midnight in Paris stand out against the other nominees as old style tours de force (if I may pluralize that phrase), crafted by well-matured masters of their art form. Somewhere on the East Coast, Jay Z's Empire State of Mind is proudly blaring.

Speaking of well-matured masters, I absolutely loved The Adventures of Tintin and Steven Spielberg will always have a place in my cinematic heart, but honestly: Rango should have won Best Animated Feature.

There! I won't mention Rango again, I promise.

Homeland nabbed Best TV Series Drama, beating out heavy favorite Game of Thrones and my personal pick, Boardwalk Empire. American Horror Story's Jessica Lange deservedly won Best Actress Drama, (I'm assuming) because –- frankly -- it is a miracle that any actor/actress could wring the slightest scrap of emotion out of Ryan Murphy's Politically Correct Horror Mash-Up series. Sure, AHS is occasionally entertaining, but the laziness of the writing cannot be overlooked. Nonetheless, much like the aforementioned Entourage, despite the show's more irritating qualities, I will undeniably sit through every single episode. Does that constitute faint praise?

What about Bryan Cranston and Steve Buscemi? Obviously, they stink compared to the great Kelsey Grammer, a figurative sponge for TV awards. (Remember Fraiser?) I'm sorry if I sound cynical. Sarcasm out of the way: I was clearly not thrilled with the TV side of things. The fact that Louis CK's brilliant show Louie was totally snubbed should invalidate the entire ceremony. Except for Scorsese and Woody Allen. But I digress.

I was asked if I could live-tweet the ceremony for ShowbizMonkeys.com, but I was unfortunately unable to do so in real time. However, I decided to do it anyway: What follows is a random assortment of what I would have tweeted. But wait a second: these are not really tweets, since this isn't Twitter... and it's certainly not live... so... um...

That's all, folks! In the end, it is what it is. I hate to sound redundant, but expecting some form of entertainment from an award ceremony is like expecting gourmet cuisine from Burger King. I'm sorry, but you've come to the wrong place. 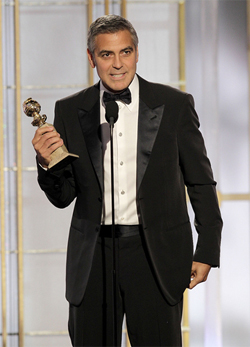 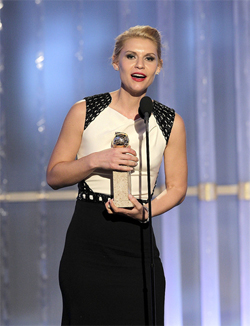