A teenage boy stares at his reflection in a fogged mirror shrouded in darkness. Moments later the same boy watches a train derail off a bridge. Then he is trapped in one of the train's cars as it fills with water. He impotently slams his hands against the ceiling in an attempt to free himself. And at last he is suspended in water; jellyfish undulate around him in the strange still peace of death.

These are the first moments of Concrete Night, directed by Pirjo Honkasalo of Finland and showing as part of the Toronto International Film Festival's Masters program. Last Tuesday I had the pleasure of talking with Honkasalo about her film. She is an unassuming woman, short haired and bespectacled in distinctly Scandinavian frames. Though not flamboyant in manner, she speaks confidently, often uttering something funny or profound without show.

The film follows young Simo on the last night before his brother is to serve time in prison. He lives with his single mother and older brother in a moldering tenement in the slums of Helsinki. His mother drinks until late at bars and brings home strange men. Honkasalo comments, "I don't see the mother as a bad person; she's a normal person but she's weak. She is a wounded woman, and has passed down her hurt to her boys." Simo admires his criminal older brother, hanging on his every word and deed. "You might almost think he would become his older brother," says the director. Through the course of the night we see the insidious way corruption and cynicism spread like disease from one generation to the next. As a young man whose identity is still formulating, "(Simo) hasn't protected himself". Like many teenagers, he fails to distinguish between the literal and figurative which for Simo leads to disaster. 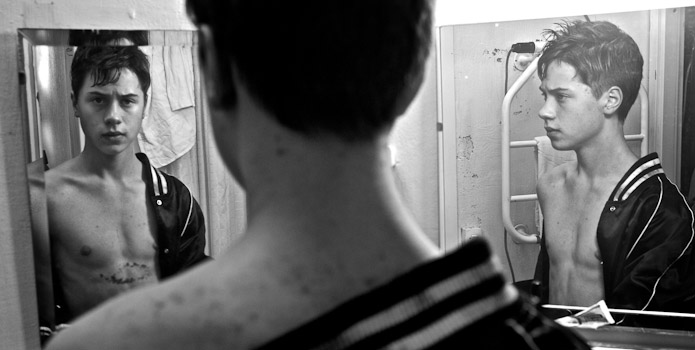 More than any other film I saw at the festival this year, Concrete Night creates a sense of atmosphere -- it is a cinematic nocturne, like a nightmare half-remembered. Honkasalo remarked, "Stylizing is natural for me. It's in my thinking... Maybe because my background is cinematography."

Shot in high-contrast black and white, the dark tones like thick brushstrokes of India ink, it evokes no specific time or place though the setting is ostensibly contemporary. While the director has been making films since before the days when color was the standard, it was novel for her young crew. Over the course of the shoot they grew to love B&W to the extent that while reviewing footage "someone flipped some color on the screen and they went, 'Yuck!' They all started to hate color."

Honkasalo also discussed her careful selection of actors who she says must exude a "naturalness" on film. "I think of actors as human beings who hide their history for the camera... I'm allergic to fake acting. They can't sell me their tricks."

The special effects in the film are exceptional which, as I discovered, is largely because almost all were real. Of the spectacular opening dream sequence with Simo drowning in the train car she said, "One of my producers wanted to use green screen and fortunately I didn't believe them. That is really the boy underwater... He was really scared. He's not this kind extreme sports guy. He was so scared he was vomiting. It was horrible I wouldn't go in there." Honasalo's restraint is refreshing after a summer where Hollywood has bombarded audiences with excessive post-production effects: battle sequences littered with so many animated bombs and so much flying debris that is just starts to blur together like a rain of confetti. As she noted, "(Post-production) is a great tool but real is real."

I attempted to probe Honasalo for the meaning behind the many oblique images scattered through the film, such as the jellyfish is the dream sequence. She wisely declined to spell out the symbolism stating, "It is the work of the critics, not mine.... Let the critics torture it." She continued, "Maybe I meant something I didn't think about... The film is like a landscape... They (the audience) project against their own memories and their own life and that's where the film is born... Each of them has seen a different film."

For those reader in Toronto, I highly recommend you catch it at the festival. Concrete Night will be showing Saturday, September 14th at the Scotiabank 14 at 9:45 PM.