In all the hubbub of the Toronto International Film Festival, sometimes it's easy to forget where you are. Amidst the wall of people crowding the streets, the buzz of foreign languages, and Hollywood celebrities emerging from black SUV's you might be at any major world film festival. Earlier this week I spoke with Vancouver based director Bruce Sweeney and actors Tom Scholte and Gabrielle Rose of The Dick Knost Show, showing as part of the TIFF's Contemporary World Cinema program. They allowed me to regain a sense of place and reminded me of the importance of Canadian film and filmmakers at this festival.

Bruce Sweeney has a long history with TIFF: his first film, Live Bait screened in 1995 and in 2001, his film Last Wedding opened the festival. Both Tom and Gabrielle have frequently collaborated with Bruce (Tom starred in his first feature). I asked how the festival has changed over the last eighteen years since Live Bait.

"(In the past) I felt really in tune with the festival -- it was on a more modest scale and it didn't have the massive infatuation with stars. Not that I'm taking the pee out of that.... I guess my connection to the festival was really strong and we had so much fun," Bruce said.

Gabrielle added, "The festival's gotten older, we've gotten older. We're not so much into the partying anymore."

"The biggest change is the Canadian films were portioned off, there was a Canadian series, Perspective Canada. The opening film was always Canadian for many years. And that sort of cut both ways and I don't know where I stand. . .People started to think Canadian film was all grown up and didn't need its own side bar; that it was ghettoized by being in a sidebar. But maybe we really did lose something because it really did build such a sense of excitement about Canadian films," Tom stated.

The Dick Knost Show makes no secret of its Canadian identity. It tells the story of the former-hockey player-cum-sports talk show host (Tom Scholte) who makes a controversial tweet in a bid to increase his followers. The plan backfires when the network considers replacing him with an opportunistic upstart. Matters are not helped when he receives a blow to the head during a game of squash and sinks into an existential crisis. Always by his side, defending him against scandal and usurpers, is his producer, Kelley (Gabrielle Rose). From the non-stop hockey references to the Vancouver setting, there's no mistaking the film's country of origin. Many Canadian directors I have spoken to in recent years seem apathetic about their films' cultural identity. I asked the group about the significance of making an overtly Canadian feature. 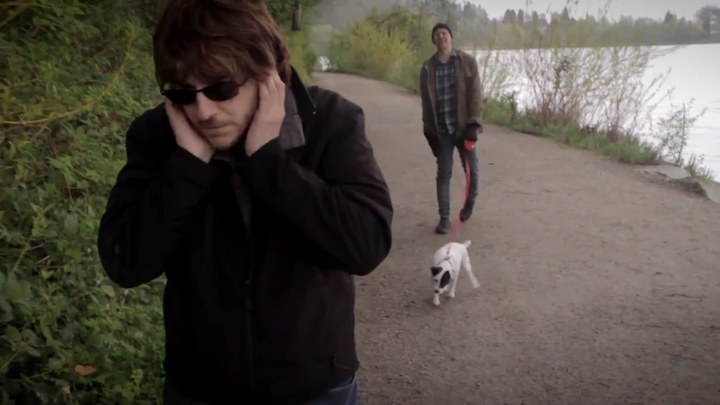 Bruce discussed writing the script, "For this film, because I'm a sports junky, I just had to get out of bed. I didn't try to make it a Canadian reference movie. This script just kind of wrote itself pretty fast and those references just seemed to fit and make sense."

Tom pointed out to Bruce, "While you weren't trying to create an overtly Canadian film, you don't try to paper over its Canadian-ness for international market appeal."

"I think it deals with some issues that can be seen internationally. I mean the fact that social media has become so prominent in society, instant messaging, the sound byte, the twitter-verse. People are constantly looking at screens, their phones and getting into trouble. It's in the news all over the world," Gabrielle interjected.

Tom continued, "If your story is going to be meaningful in a truly universal way then you need to write about what you know. . . I'm a big believer that while we Canadians should make films with international appeal, they should have a Canadian stamp."

To further elaborate on Gabrielle's point regarding the film's commentary on social media, I asked about the film's humorous but cynical treatment of the issue.

While Tom acknowledged the importance of social media in the Arab Spring and other political movements, he noted, "In our privileged society it's the crack-cocaine for narcissists... You get to manufacture an image for yourself."

"I think the anonymity of social media gives them balls that they wouldn't have face to face. It allows them to skewer other members of society without seeing or feeling the repercussions. And I think the film reflects that," said Gabrielle.

Dick Knost is a perfect representation of the ills of media. The persona he manufactures on his show and in social media is of a self-absorbed jerk. Gabrielle continued, "It is the dichotomy of Dick -- he's one person in the recording studio and another in his living room."

Vancouver has become renowned as the Hollywood of the north, with big-budget action films habitually closing off whole swaths of streets and celebrity sightings on the Skytrain. I wondered what it was like to shoot a small indie film in the center of mega-budget blockbusters.

"We had a blast making it. We had a three man crew... These guys (Tom and Gabrielle) are great -- just wind them up and let them go. Basically we just get to be ourselves," explained Bruce who served as cameraman as well as director. Gabrielle's husband drove the cast and crew around in his van.

Tom commented, "The fact is our films are made completely disconnected from that world (Hollywood) but without the trickle down of actors having a big fat paycheck from some Hollywood film often allows us to make a film like this.... I'm growing up and realizing (the world of Hollywood and Independent films) are more connected than I realized."

I don't think I'm ruining anything by disclosing that Dick's foray with becoming a new man ends pretty much where it begins: back in the studio--"a true showbiz animal to his core" as Tom described him. I was curious whether they ever considered following through on Dick's catharsis.

Bruce stated, "I wanted a guy who steps out from his life and reflects on it in a way he never has before but ultimately reverts back to who he is. The vanity, the perks and the lifestyle -- everything about it is irresistible. So despite the harshness of the industry, and despite personal neuroses and despite personal disability he goes back to himself... (If Dick changed) it suddenly turns into this message 'You can change yourself' but I'm saying, you're not going to be able to change yourself."

The Dick Knost Show will be showing next at the Vancouver International Film Festival on September 29th, October 9th, and October 11th.