Every Last One Of Them

2018 Winnipeg Folk Festival Preview: Who to see, how to keep up, and a look back at last year

The Winnipeg Folk Festival has been going strong on the Canadian prairies for over four decades. Music, community, environment, food, fun -- these are all integral parts of what makes the Winnipeg Folk Festival so special year after year. There are travellers from across Canada and the U.S. midwest; families with babies and grandmas and everyone in between; hippies and hipsters; Americana fans, Canadiana fans, hip-hop fans, indie rock fans, bluegrass fans, EDM fans, and of course folk music fans; and then there are the crazy campers, but that's a piece for another day.

Most importantly, there are the amazing musicians from around the province, country, and world bringing their sounds to the audiences; and there are the volunteers who make the Winnipeg Folk Festival run as smoothly as any festival of this size ever could!

The point is, even with thousands of music festivals around the globe -- folk and non-folk alike -- there's nothing quite like sitting on a tarp or dancing in the pit with thousands of your new best friends listening to a crazy-talented band while under a Manitoba sunset.

A couple weeks ago, our own Paul Little got the chance to speak with Chris Frayer, the Artistic Director of the Winnipeg Folk Festival. In his 11th year booking Manitoba's premiere summer event (and that's saying something given the popularity of the Winnipeg Fringe Festival, Folklorama, and the Winnipeg International Jazz Festival), Frayer reflected on the impact of the festival on the local music scene, spoke of the make-up of a modern "folk" festival and its booking challenges, gave his input on what artists he's most looking forward to seeing at this year's festival, and spoke about the ongoing positive reputation of the festival globally.

As we look forward to this year's festival, we also invite you to take a look back at last year's festival, with some of our favourite visuals from last July set to a live tune by Winnipeg band Sweet Alibi. The band made their festival debut in 2014, and graciously allowed us to use their music to go along with our highlight video (edited by Ian Bawa). 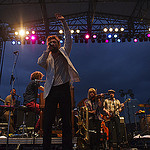 Artistic Director Chris Frayer told us that he can't think of a better band to bring together all the aspects of what the Winnipeg Folk Festival is about than California's Edward Sharpe and the Magnetic Zeros. And why not? They're massively successful hit "Home" stretched from commercials to pop and rock radio to indie and folk Spotify playlists. It was everywhere, but for all the right reasons. It's catchy, it's got a rousing folky beat, and it's got singalong potential like very few others. They're going to get the young people on their feet and please the traditional folk fans at the same time.

Opening up the entire festival at 6:00 PM on Thursday is a local favourite, The Mariachi Ghost. If you haven't seen them live, you'll soon find out that they put on an unforgettable live show worth the price of admission on its own. Their latin-inspired jazz and folk sounds, combined with full-band makeup and dancers, may seem a bit out of place this far north of Mexico, but the band is on the rise and killing it at every stage. Look for nationwide success (and beyond) from them very soon! 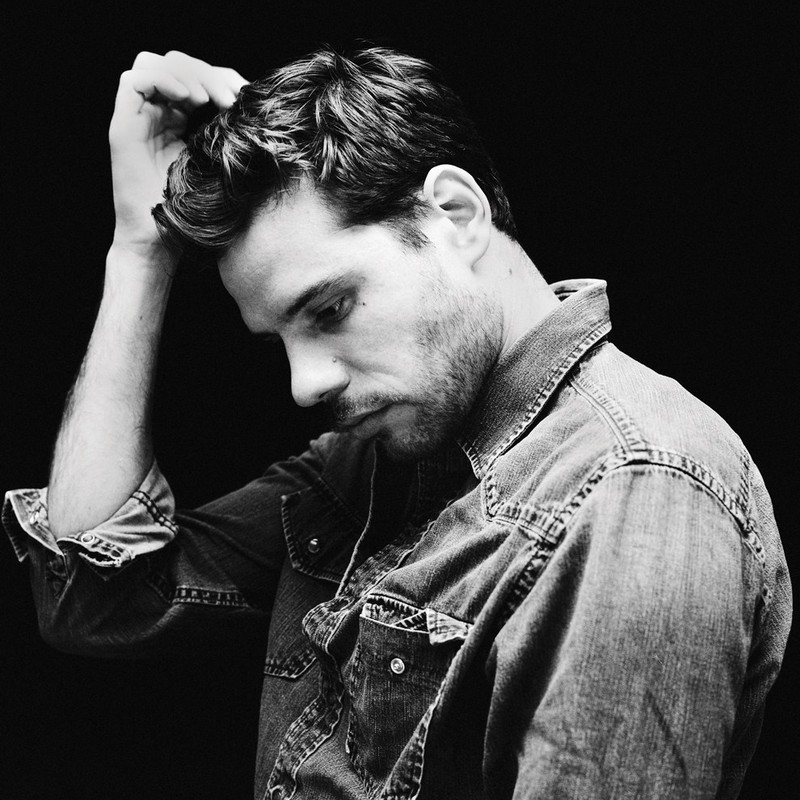 The main stage features a trio of top-notch acts on Friday night, lead by one of the smoothest folk acts around in Bahamas at 10:55 PM. Last seen around these festival parts 3 years ago, Bahamas has since released a new album (Bahamas is Afie), appeared on our favourite talk show Conan once again, and has a hugely successful theatre tour around North America. You'll never hear a more perfect combination of voice and just the right amount of groove to make you shiver than with Bahamas. For a bit of a different side of the folk/rock world, there's Shakey Graves at 7:05 PM. A Folk Fest returnee, he also played Winnipeg's Park Theatre over the winter for back-to-back nights, and he tore up the place. He'll get you moving, rocking, singing along, clapping, and everything else you want out of an immersive music experience. You also can't discount main stage opener Dustbowl Revival, hitting the stage at 6:00 PM sharp. This California band, harkening back to the sounds of the 20s and 30s, is one of the acts Frayer said he's most looking forward to. 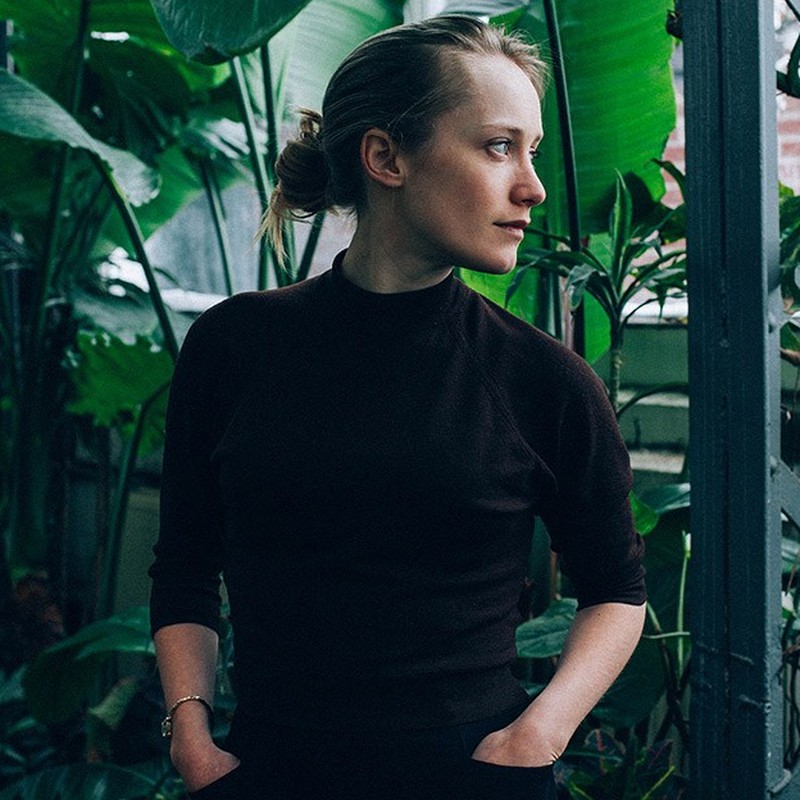 Also, don't miss the daytime workshop, "Girls Just Want to Have Fun", taking place at Bur Oak from 4–5:30 PM! Featuring some of our most anticipated performers at the festival all on one stage -- Frazey Ford, The Weather Station, Twin Bandit, Jessica Pratt, and Terra Lightfoot -- we anticipate some great stories and hopefully collaborations from this group. We're serious folks, this one has "highlight of the festival" written all over it! The Weather Station (the project of Ontario's Tamara Lindeman) and Twin Bandit (BC's Hannah Walker & Jamie Elliott) are definitely artists to watch out for, and our friend Matt Moskal said he had a really great chat last week with the talented Frazey Ford, who should be a crowd favourite. Again, what more could want? Don't get too greedy! 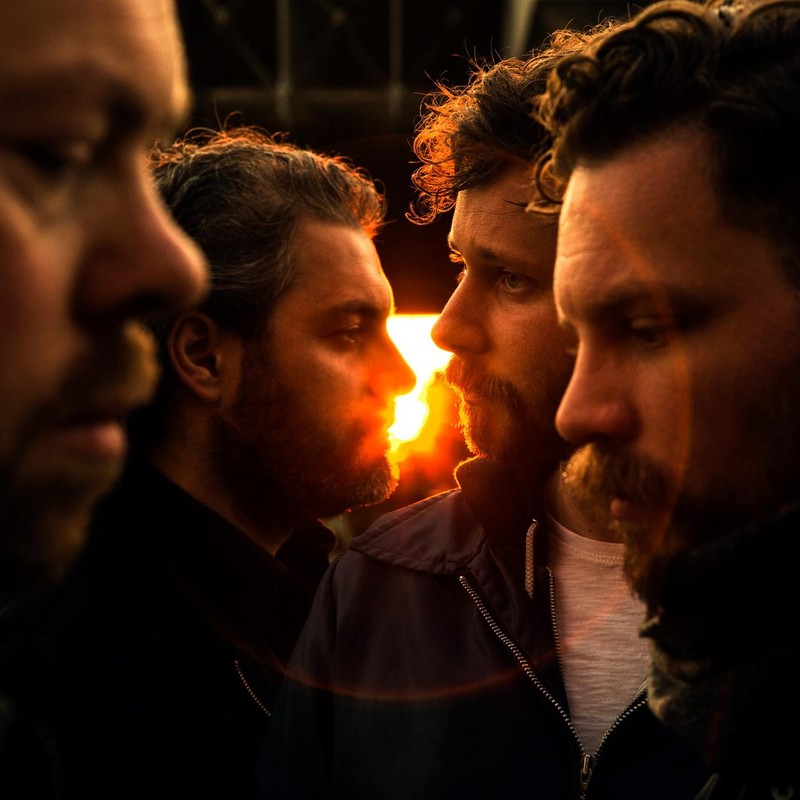 One of our favourite artists in the world is Vancouver, BC's Dan Mangan, and he's back in Winnipeg for the 3rd time in the last year, once again with his backing band Blacksmith in tow. Combining a gorgeous, gravelly voice with off-beat instrumentation from his jazz-trained band and rousing anthems to get people off their feet, the multiple Juno-winner continues to gain followers around the globe. The guys hit the main stage at 7:05 PM on Saturday. Following Dan Mangan + Blacksmith is legend Arlo Guthrie at 8:10 PM. An integral part of one of the most profilic families in the folk world, Guthrie is being honoured this year with this year's Winnipeg Folk Festival Artistic Achievement Award. He's also touring in celebration of the 50th anniversary of his seminal piece, "Alice's Restaurant", which he's brought back into his set list after many years. 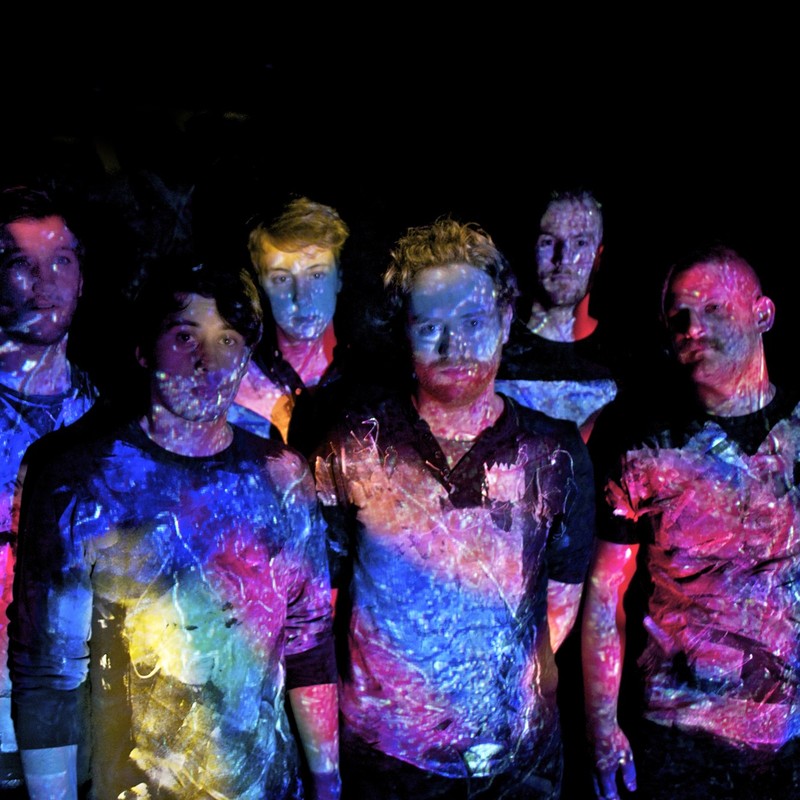 What's that? You want more? Well why don't you head over to Big Blue @ Night for Winnipeg's own Royal Canoe! One of the most interesting bands to come out of anywhere in the last few years, yet alone this small prairie city, this 6-piece somehow finds a way to combine odd-time signatures, peculiar vocalization, jazzy beats, and pop sounds to create catchy, danceable tunes. It's a miracle, and one we're happy to see grow with each release. After a 2014 that saw them open for the likes of Bombay Bicycle Club and headline their own successful North American tour, they've been holed up writing and recording new music in 2015. Hopefully we'll see some of what they've created at 9:10 PM on Saturday night. 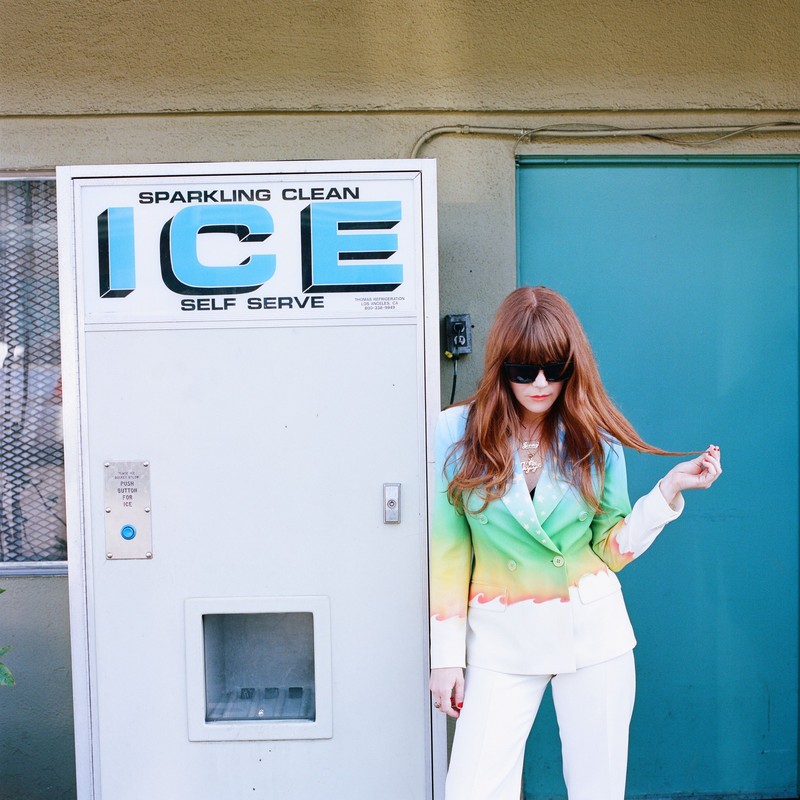 Some very smart and very interesting people count Wilco as their favourite band, and they're certainly onto something. It's been 20 years since their debut, and the critically-acclaimed band lead by singer Jeff Tweedy (who visited the Winnipeg Folk Festival as a solo artist in 2011) continues to tour the world with 8 albums of award-winning work behind them. They're the perfect band to close out the 2015 Folk Fest at 8:40 PM. Prior to Wilco's set, singer/songwriter Jenny Lewis hits the stage, and we couldn't be more excited. Lewis has been a big part of the folk and indie scenes for more than a decade, putting out 3 successful solo albums, leading the indie rock band Rilo Kelly, touring with The Postal Service, and recording/performing as part of the duo Jenny & Johnny. She's busy, for sure, but she's making time for the final night of this year's Winnipeg Folk Festival, and you don't want to miss this set. 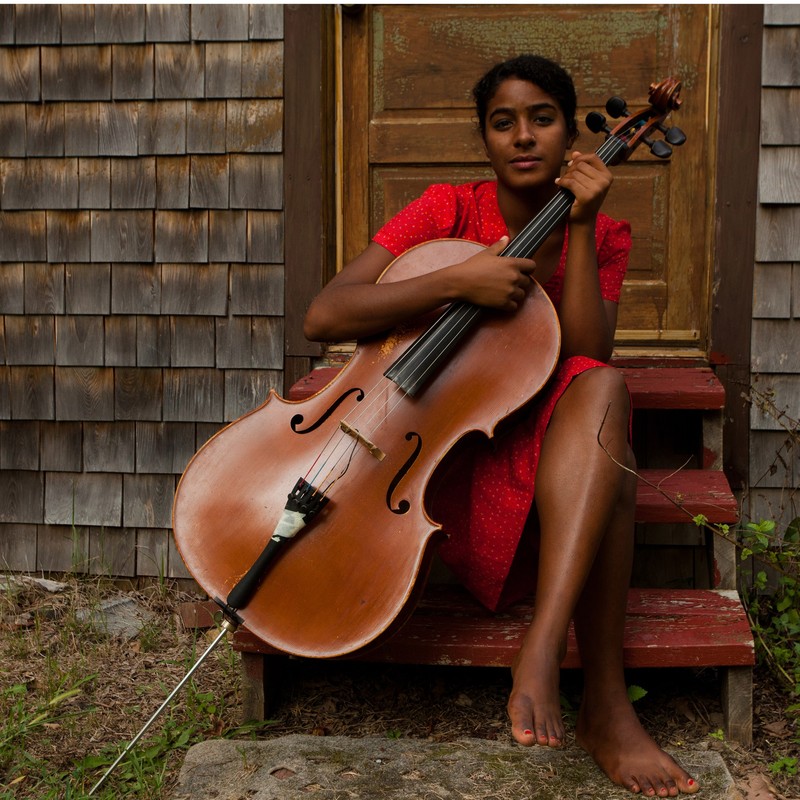 There are dozens and dozens of great workshops and smaller shows at the various daytime stages. You get a more intimate view of some your favourite artists, and they have more freedom to tell stories and collobarate with other artists joining them on stage. All those daytime stages -- each with its own distinctive vibe and feel -- are also great places to check out full concerts from some amazing performers who may not be visiting the main stage on this Folk Fest visit, but are still worth an hour of your time. So check out as many daytime stages as you can on Friday, Saturday, and Sunday afternoons -- but definitely make time at 3:30 PM to see cellist Leyla McCalla. Her music evokes jazz, bluegrass, Americana, a touch of classical, folk, and the blues. It's all in there, with voice and cello, and that itself is impressive enough. But it's also SO. GOOD.

We welcome you to follow us on Twitter (@showbizmonkeys), Instagram (instagram.com/showbizmonkeys), Periscope (@showbizmonkeys), and Facebook (facebook.com/showbizmonkeys) -- or simply check out all the coverage below! And if you're at Bird's Hill Park for the weekend, we want to hear from you. Leave comments on this page about who you're most looking forward to see or your favourite festival moments as they happen, and be sure to tag us if you're posting on social media so we can include you in our coverage.

For anyone out at the festival, have an amazing weekend! For anyone following at home or after the festival is complete, we hope our coverage gives you just a little taste of the amazing experience that is the Winnipeg Folk Festival. Happy Folk Fest!