Walkey Talk: Who the Hell Are the Hollywood Foreign Press?

Ah, awards season. It's a great time in Hollywood. With so many awards these days being handed out to doctors, scientists, and educators, it's about damn time they honour millionaire movie stars! But seriously, for movie fans like me, it's a chance to see some great films. And if you're an over analyzer, also like me, it's a chance to debate which films are the best of the year, discuss whose performances are Oscar worthy, and ask yourself questions like: which films will be remembered ten years from now? And just who are the Hollywood Foreign Press?

Earlier this week, the first important awards show of the year occurred (sorry People's Choice Awards), kick starting the industry's award season into high gear. Think of it as the playoffs and we've just completed the first round. The second round comes in the form of The Academy Award Nominations taking place this week, followed by various Guild (Actors, Directors, Writers) Award Presentations, which make up the third round. A brief detour overseas marks the fourth round of Filmdom's Playoffs for the BAFTAs, aka British Oscars. Then all roads lead to the Kodak Theatre in Hollywood for the final round and the almighty Academy Awards on February 26, 2012. There we find out which team wins the Stanley Cup (Best Picture) and crown 2012's Prom King and Queen (Best Actor and Actress, respectively). Not to mention a few "thanks for coming out" prizes. I'm looking at you Sound Effects Editing!

Every year, the day after the Golden Globe Awards, someone asks me who the Hollywood Foreign Press are (the organization that hosts the ceremony) and just how much influence do they have on the Oscars? And since this year was no different, I decided to do something about it.

I'm here to settle it once and for all. I will unveil who this mystery organization is, if they even exist at all? Has anyone ever seen a member? Not me. And I'll bet not many in Hollywood!

The Hollywood Foreign Press Association (H.F.P.A) is an organization composed of working journalists who cover the United States film industry for a variety of outlets, including newspapers and magazines in Europe, Asia, Australia, and Central and South America. There are 93 members of the H.F.P.A. Requirements for membership include residence in Southern California and a minimum of four published articles per year. A maximum of five journalists are admitted to the organization each year. All members are accredited by the Motion Picture Association of America and must submit clippings of their work every year to justify their membership. (Source: Wikipedia)

The Golden Globe award itself has had its share of polarized opinions about its value. Some see it as the second most prestigious award after the Oscar. Others see it as meaningless. Much of the controversy is brought upon by the Hollywood Foreign Press themselves.

Over the years the H.F.P.A has received a bad rep for being a bunch of hob nobbers and social climbers who like nominating big stars and mediocre movies to pad the list of celebrities seen during the telecast. The most obvious example is dividing the Drama and Comedy categories -- basically a way to get more nominations. More nominations = more stars. Truth be told, people have known about their antics for years, but it was just something no one spoke about aloud. Last year, the scepticism hit an all time high when the critically lambasted Johnny Depp/Angelina Jolie vehicle, The Tourist, was nominated for Best Musical/ Comedy amid rumours of Sony, the distributer of The Tourist, had bribed Globes voters with an all expense paid trip to Las Vegas and a concert by Cher. Last Sunday, even Johnny himself admitted to never seeing The Tourist. 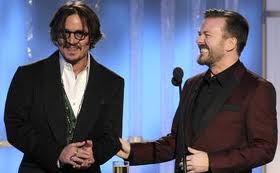 I don't condone the alleged actions, but award shows by nature are unavoidably political. There's no way to prove all nominations are deserving since one can always fall back on the "opinion" argument. But when stories like that surface it's hard not to wince, especially since the organization has questionable credentials. They're not actual critics or people who work in the industry like members of the Academy. And unlike the Academy who has over 5000 members, there's only 93(!) members of the HFP making them an easier group to influence. And what about those membership requirements? All they have to do is live in L.A. and write an article every 3 months? And that makes them qualified to honour excellence in film and television?

Now I'm not here to dump all over the H.F.P.A. They are clearly lovers of film and the millions of dollars raised by their annual Golden Globe Ceremony is donated to various film related charities including those for film preservation and scholarships for young filmmakers. As a film lover, I have high regard for that. And as a viewer, the Golden Globes telecast, complete with its open bar dinner party, is far more entertaining a show to watch than the rigid auditorium assembly known as The Academy Awards. Let's face it, the HFP sure knows how to throw a party. And I guess that's both a blessing and a curse for their reputation.

But do the Globes have any influence, particularly over Oscar voters? Whether they admit it or not, Academy members are influenced by the Globes who hand out their awards before the Oscar nominations are even announced. The Globe by itself is not enough to secure an Oscar nod. But for an actor or a film that's already won a slew of accolades, the addition of a Globe can firmly position them as a front runner. Eg. The Artist –- this year's Golden Globe winner for Best Musical/Comedy

In recent years, the Globes influence has waned. Slumdog Millionaire is the only Globes and Oscar Best Picture in the last seven years. Million Dollar Baby, Crash, The Departed, No Country for Old Men, The Hurt Locker, and The King's Speech: all best in the eyes of The Academy, but not The Hollywood Foreign Press. This is more a result of the Academy moving their nominations and awards up a month, however, leaving a shorter window between the ceremonies. The Academy decided to move their ceremony from late March to late February, oh, about 8 years ago in fact! Many of the recent Golden Globe Best Drama winners are films whose momentum peaked too early. Eg. Last year's The Social Network.

But let's face it, the Golden Globes are just like any other award in Hollywood and that includes the Oscars. It really doesn't matter who wins. And I don't mean this in the cliché, "there's no such thing as the best" or "you can't compare art" type of answer.

I mean that all these award shows are advertisements for films that wouldn't normally get the advertising they deserve because they'd have to compete for screen time with movies about ass kicking robots, or something along those lines. Many of these films are more difficult to sell than a presold product like Twilight, The Avengers, or Hunger Games. Most of these movies rely on positive word of mouth to do the advertising for them. And you can't buy better word of mouth than these award shows.

Some films' entire box office revenue are completely determined by these award shows, such as documentaries or foreign language films.

I guess it really is just about money... but I mean that in a good way.

If these award shows get people to seek out quality movies that they wouldn't have normally seen on their own, then they've done their job.