The Kids in the Hall released a new season and it's caused me to reflect on my relationship with comedy. Comedy is defined by moments: moments of laughter, moments of pain, moments of import. SNL was one of my earliest relationships. The show started a year after I was born and I started watching it way too early. As a kid, I watched it over the air before cable was a thing when I was still young enough to miss Mr. Rogers' Neighbourhood but somehow found a way to watch "Mr. Robinson's Neighbourhood". This was my first act of rebellion.

We moved east, landing in Pickering, a city built on the lie of the suburb: that everyone is happy, all it takes is a two-car garage and 3.5 children. I started watching Benny Hill and Monty Python and my comedy reality mirrored my home life. Things were troubled, broken, and bizarre. I found my dad's dirty magazines, their tawdry titillation mirroring the grotesquery of a bloated old man chasing young women, grasping at them as "fun" and "silly". At that same moment, I found Python and their dark rejection of the status quo, and the banal lie that was British class society reflected my rejection of the lie that all was right. It was a bad time – I was a 12-year-old kid asking my friend with the dad who was a cop how to best shoot one's self. My outer world was Benny Hill's Yakety Sax number, my inner world was Meaning of Life's stroll to the cottage... and yes, there were moments in my head where I was being chased by topless women in bicycle helmets, but this was my first moment of self-realization.

Then came 1989, the start of my time in high school and the year The Kids in the Hall came on the air. The radio was dominated by Bobby McFerrin's ode to being happy, Robert Palmer's sex tribute about the irresistible power of cold women, and New Kids on the Block pioneering modern seduction of tween girls. That was the public face, but behind that, this was the flowering of alternative music – R.E.M.'s philosophical odes, Sonic Youth's low-fi sensibilities, and Green Day beginning their journey fusing the punk sensibilities to the pop structure. Comedy was seeing the same inventiveness. Yes, you had Kinison loud and brash, Tim Allen playing the every man who was secretly a coke dealer, and Louie Anderson just being charming. At the same time, new voices pushed back at the older structures like Alexei Sayle in the UK smashing class boundaries, Bill Hicks calling out Regan-era hypocrisies, and a young Chris Rock taking up the mantle of Pryor. These voices were more grounded in self and the start of a new generation of comics. Out of this stew of anger and Gen X rejection of our parent's lies came Janeane Garofalo, Patton Oswalt, and most importantly to me, The Kids in the Hall.

Like Saturday Night Live, their first episode aired a few weeks after one of my birthdays, and when I saw them perform it was the first time I saw comedy for me. I felt directly talked to, not as an audience but as a peer. There was a group who understood EXACTLY what I felt and it was empowering. The Kids in the Hall television series ran the length of my high school career, mirroring my experience. Those first confused days in high school were like those first confused sketches taken from the Rivoli in Toronto, a stage home to Patti Smith and Iggy Pop but also a shelter that birthed the most truly punk comedy troupe. Their last season was the year I graduated off to University, sure in my sense of self as to me they seemed sure in what they could accomplish by ending the show. 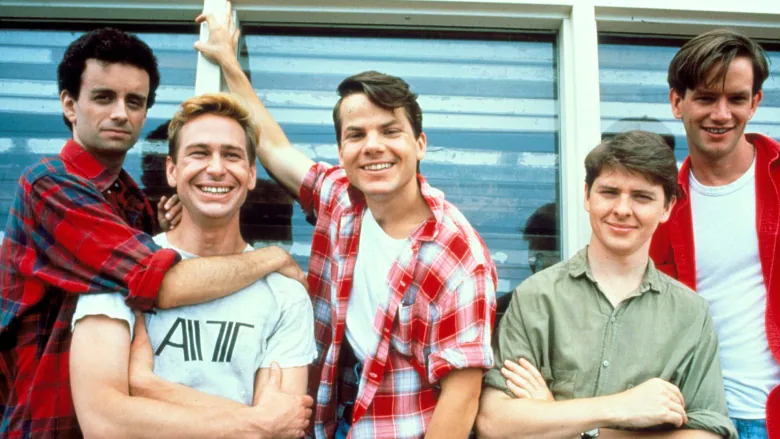 At its core, alternative comedy is personal, revelatory, and arguably self-indulgent. It's laying your soul out for the audience and finding that common ground where we can laugh at shared trauma. The Kids in the Hall had broad premises, but at their core were utterly grounded in personal moments. Even their most arch concepts like Dr. Seuss Bible or the suit-trapping Coureur de bois picks at an element of our shared experience drawing it out to the most extreme and ridiculous breaking point. And while these ridiculous concepts may stick in the memory, it's their deeply personal sketches that are what cement our relationships with them as a troupe.

You'll never see an SNL sketch like Gordon berating poor Fran over a salty ham; Mad TV showing Scott's Danny Husk – the most mundane human in the face of existence – telling you not to put salt in your eyes; or even Mr. Show doing a sketch like Bruce channelling the perfect drunken father giving birthday advice. This is not an indictment of these other shows, but illustrates what made The Kids in the Hall special: they created deeply personal sketches that captured the pain, deceit, and ridiculousness at the core of the Canadian family unit.

That last sketch, "Becoming a Man", hit me hard. It was late in their run, in season 4 towards the tail end of the season and well into my parent's marriage falling apart (again). The reality of my father's behaviour had sunk in and I felt abandoned and isolated. All of my friends had these wonderful homes with happy, adoring fathers, and I felt utterly alone. Then I saw this sketch, being forced to do something ridiculous like drive your father to a rock to listen to him pontificate based on some internal mythology about family "tradition" where it alternates between threats of violence and disclosures no child wants to hear from a parent in the service of "Becoming a Man". It was interactions like this that made me think I don't want to be a man and if this is what manhood is, maybe I'm not a man. I knew I wasn't alone; it was a relief.

Now, 26 years and a handful of weeks after the troubled release of the troupe's film, Brain Candy, The Kids in the Hall return with a sixth season, this time on Amazon Prime. They are older and wiser, but their core ethos remains unchanged: it's punk, spitting in the faces of fools, but at its core, it's also kindness. It's about the connections that we all share and those that stand the test of time.

Mr. Show, led by Bob Odenkirk and David Cross, was launched the year The Kids in the Hall went off the air, and also reunited not long ago. Both Kids and Mr. Show maintained their format. In the case of Mr. Show, really, it was an exercise in nostalgia. W/ Bob and David could have aired in any season of Mr. Show, but with The Kids in the Hall we could never have seen these episodes in 1994, as they're centred around the accumulated wisdom of the cast. 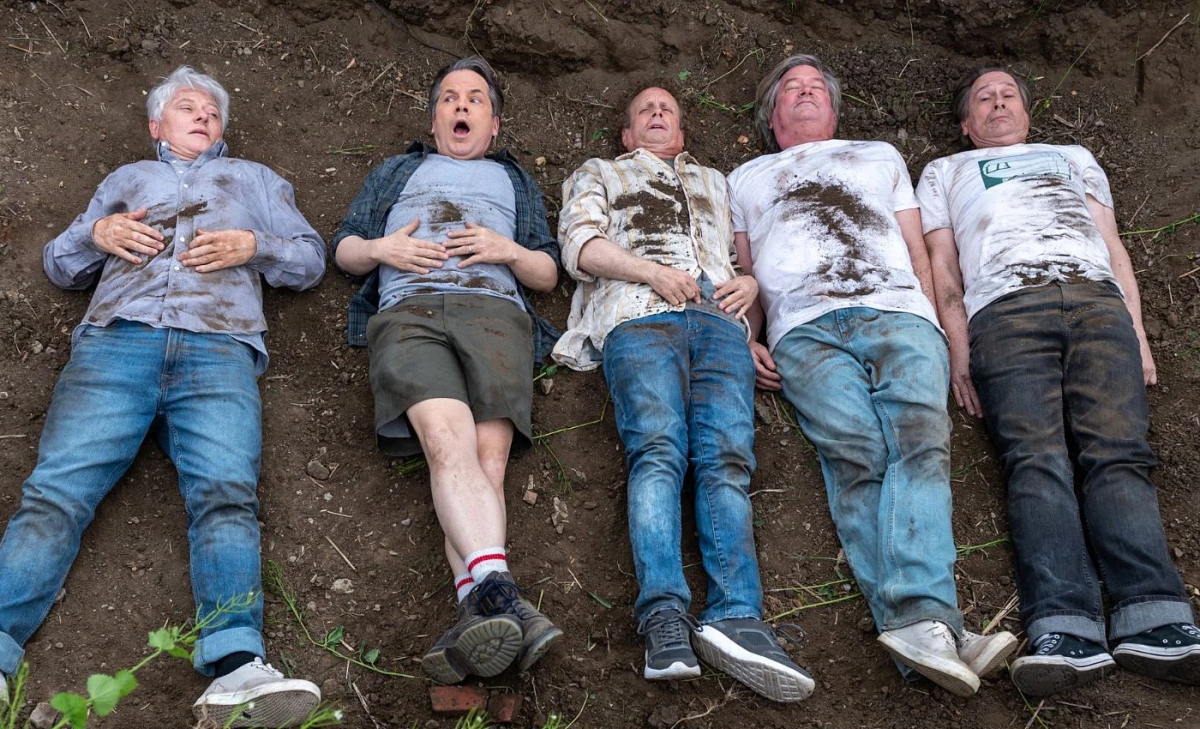 Yes, we get the regulars like Danny, Bruno, and Francesca along with Gavin, but we also see Dave and Kevin's penises in the first five minutes of the first episode (brace yourself, it's like seeing an older brother naked... in their 60s). This was probably them doing something they always WANTED to do at the CBC but couldn't (Kevin will ALWAYS get naked for a sketch), and they just wanted it out of their system, but what we also get are characters like Fran and Gordon sharing a moment we always knew was at the core of their relationship and a drunken dad just trying to be a good person. These are stories that in their younger years they may have been unable to speak about due to the pain of their lived experiences, but now with time and distance, they were able to give them a voice. They can reflect not on the anger of youth but the trauma of age, the inevitability of death, and the shared realization that we are frail but we are all still children at heart. And it's funny as f***, but despite the accumulated wisdom, these are still the same guys that made fun of the CBC, HBO, and NBC during their original series. Now, the new season is framed in a device ridiculing Amazon as the malevolent corporate evil that it is... even if it's giving them a paycheque that they are ready to take.

For me, Saturday Night Live was a younger sibling – it's been with me all my life, and even when I hate it I can't help but love it. Benny Hill and Monty Python were grade school friends – reconnecting with them shares a mix of chagrin, laughter, and embarrassment at what they got up to and how it has NOT aged well. But The Kids in the Hall are like a first girlfriend. They're my first kiss but not my first lover. They're that innocence and kindness shared between two people who were too young to know what to do next, drifting apart, only to be reunited at a high school reunion years later, finding that we still make one another laugh, but now you have an entire new world of experience to commiserate over, and ten bucks... is still ten bucks.