DJ Qualls first caught our attention a decade ago, in the ridiculous Todd Phillips comedy, Road Trip, and has been a staple in film and television since then. He's starred in films as diverse as Hustle & Flow, The Core, and I'm Reed Fish, and make memorable guest appearance on TV series like Lost, Numb3rs, Breaking Bad, and My Name is Earl. Now, he's landed his first regular television gig, starring opposite former Earl star Jason Lee (sans-mustache), Sam Hennings, and Alfre Woodard in the TNT police drama, Memphis Beat.

ShowbizMonkeys.com got the chance to sit in on a conference call with Qualls, where he spoke about his Memphis Beat character, growing up around the show's titular city, and the difficulties adjusting to the strenuous schedule working on an hour-long television drama.

And be sure to tune in tonight at 10pm on TNT for Memphis Beat's fourth episode, "Polk Salad Annie", which heavily features Qualls' character, Davey Sutton.

Can you start by telling us a bit about the character of Sutton and how much of yourself you bring to the role?

DJ Qualls: Well, I certainly identify with him. We're both Southern boys. I'm from Tennessee also. But I really love -- I love the fact of how eager he is. And it reminds me of, like, when I first started my acting career, like I would have done anything. And I also thought I knew a lot more than I did. And that's sort of Sutton in a nutshell. Like, he's a patrolman, but he really thinks that he's ready to be a detective. And because of that -- and because of what he doesn't know -- he's so ignorant he doesn't know what he doesn't know. But what's so fun about playing him is that as the season is going, he's learning more, he's getting to do more things. And then the episode that airs on Tuesday night, I think that's the 13th, it's his first sort of big shot. He gets the shot to go undercover, and try to bust a girl who's hiring a contract killer to kill her brother.

What does it mean to you to be on a show set in Memphis, since you're born and bred in Tennessee?

DQ: You know... it was one of the reasons why I wanted to do this show, and initially when I signed on to do it I thought we'd be filming there. Apparently, Tennessee has problems with their tax incentives. They really don't offer any to draw filming. So we wound up showing the show in Louisiana. But I still feel like I'm doing the South justice. And I feel like people don't get the South right. And if there's a joke to be made about the South, it's mine to make. And also, I -- you get to see how good the hearts of Southern people are. We really are a pretty simple people as a group. People think we're stupid because we have southern accents, which couldn't be furthest from the truth. But I think that we do a good job in representing the spirit of Memphis, even though we don't shoot there.

How do you, with shooting in New Orleans -- I mean, how do you guys keep that kind of Memphis feeling on the set? Do you listen to Memphis music?

DQ: The creator, Johh Harton, is a Southern boy, too. He spent a lot of time in Memphis. I spent a lot of my childhood in Memphis. My grandparents lived in Collierville for a while, you know, so Memphis was just a destination. You know, everybody makes that like teenage pilgrimage to Graceland at like midnight -- let's go to Memphis. I got my first tattoo in Memphis. It's just -- and also, like, doing Hustle and Flow, I feel like such a guardian of the city and I completely understand. Our biggest critics are Memphians and I get it. They want a show called Memphis Beat shot in Memphis. And what I really want to urge everyone to do is if you want a show shot in your town, we really have to work on our state legislature. We should be drawing these jobs to our own state. 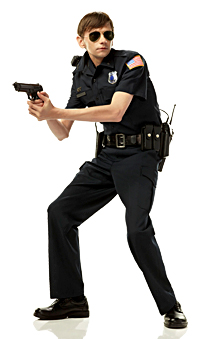 What's it like being a regular on a TV series now that you've done a lot of guest shots?

DQ: It is completely different because when you go on a show as a guest, you're playing in somebody else's house. They have a set rhythm. You never, no matter how nice they are, you never feel at home. So when I took this job, I really, you know, I didn't know what that felt like to have that sort of home feeling. And about three episodes in, I loved doing TV. First of all, it's an acting boot camp. TV is hard. You're shooting so many pages a day. You've got to be on -- I mean you have to be on all of the time. Our days are like 16, 17 hours every day. But I love it because you let your guard down on TV in a way that you don't in film because on film there's a beginning, a middle, and an end. It's a 2-hour movie. You're going to be there for a set amount of time. But TV could go on for a very long time. So you really bond with your cast and crew in a completely different way. Honestly, like if the show doesn't come back next season, although it's kind of looking like we will because we're doing pretty well -- actually, we're doing very well -- I'll be pretty sad. I'm going to be sad about it because I really love this job. And I love these people. And I've been lucky enough that Alfre Woodard and Jason Lee and I have known each other for about 10 years so they're old friends.

What has been one of your biggest challenges while shooting the show?

DQ: Honestly, it's something that's so mundane, but it's the heat. It is so hot, people are dropping like flies. I think Jason passed out a couple of times. I know I have. What I love about our show -- we're not a procedural. Most procedurals shoot, it's a standard formula. You shoot 5 days -- 5 or 6 days -- and it's on a stage, like, you know, interrogating people, and then maybe 2 or 3 days on location. Only about 10% of our show is shot indoors, on a stage. Most of our show is shot on location. So we're out getting local flavor. But we're also out in the elements. And it's really, really tough. It's funny, because when our guest actors come in from L.A., they don't want to come back because our conditions are probably some of the hardest. I just did a movie in the Philippines and we shot in the middle of the jungle and I've got to tell you, this rivals it.

One other thing -- I want to start a nationwide campaign to make cop uniforms out of cotton, not polyester. My crotch is so chafed from running down the street in humidity-soaked polyester. Respect your policemen, they have a hard, hard life.

How important do you think social media is in this day and age to a show's popularity?

DQ: Well, I just started tweeting because it's just the most convenient way when you work such long hours. The hours on TV are way worse than film, way worse than any of us expected, especially on this show because our show is shot mostly on location and it takes more time.

So I started basically just to, you know, to be able to tweet one message so a bunch of my friends can know that I'm still alive. But I'm really starting to get into it. But I have to -- like, it's a weird balance because the other day, I realized that TNT is one of my followers. And that night I sent a text saying, "At a bar, 3:00am, please God don't let me take home a stranger," as a total joke. First thing the next morning I was waking up, like what did I tweet last night? And then I was like, "Oh no, my bosses are on my follow list." So I don't know.

So then I had to make a decision. I was like, "Am I going to have a sort of sanitized Twitter account? Or am I just going to just tell the truth and tell how I feel?" I can't really do it any other way. So if you follow me on Twitter you're going to get some details of my personal life that you may not want to hear, but you're going to get them.