Submitted for your approval... Five strange and horrific works of cinematic depravity, the total running time of which would make a lovely line up for a li'l Halloween film festival.

My advice? Why not lock the door, draw those pesky curtains and dig into that massive bowl of candy yourself. Kids aren't getting enough exercise these days anyway. You'll be doing them a favor! And while you're at it, why not string some razor wire around the top of your fence. This time of year, those damn teenagers and their toiler paper...

Whew. That's better. Sorry about that. 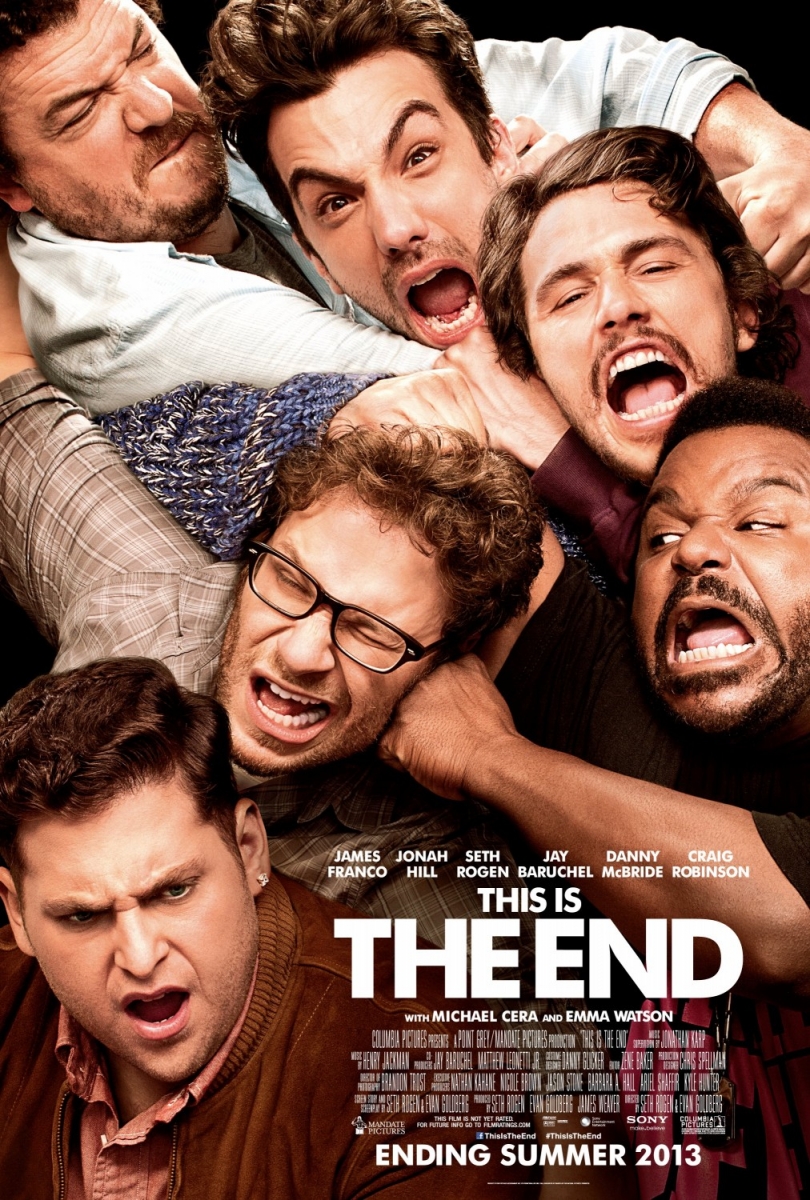 A debauched Hollywood party is cut short by the end of the world, overrunning the city of Los Angeles with anatomically correct demons. Seth Rogen and Evan Goldberg's The Is The End is an endlessly inventive comedy with a macabre sense of humor. We'll call it a partial horror movie, and one very much worthy of an October 31st viewing.

The party in question is being thrown by famous actor James Franco (Spring Breakers) and attended by his various celebrity pals, many of whom closely resemble the cast of a Judd Apatow movie.

And then, it's the end of the world, in the biblical sense. The good are saved and go straight to heaven. The rest are left to burn. Confined to James Franco's mansion and down to only one Milky Way, fire and brimstone rises from the ground outside and our celeb heroes are left to ride out the apocalypse.

Morality is at the center of This Is The End. These 5 friends are only stuck on earth because they were not worthy. They're bad people. A dinner table confession scene informs us of our heroes many, many sins. Their only way to salvation is through change. They must become good people, which isn't easy under such hellish circumstances.

The film masterfully blends horror and comedy in ways that evoke the work of Quentin Tarantino, Edgar Wright and Sam Raimi. The severed head that gushes blood when picked up... The molestation and subsequent exorcism of Jonah Hill ("...from Moneyball.")... The transformation of Danny McBride (HBO's Eastbound and Down) from movie star to a Mad Max-style nomad in a sadomasochistic relationship with Channing Tatum (Magic Mike himself)... Madness swirls around our protagonists and yet, first time directors Seth Rogen and Evan Goldberg (who wrote Superbad together) manage to keep the narrative grounded.

I forgive the lazy writing of the heavenly ending and the 90's teen idols who cameo as punchline. You can't fault a film with so many great punchlines for collapsing with exhaustion at the end. 99% is still a damn good grade. 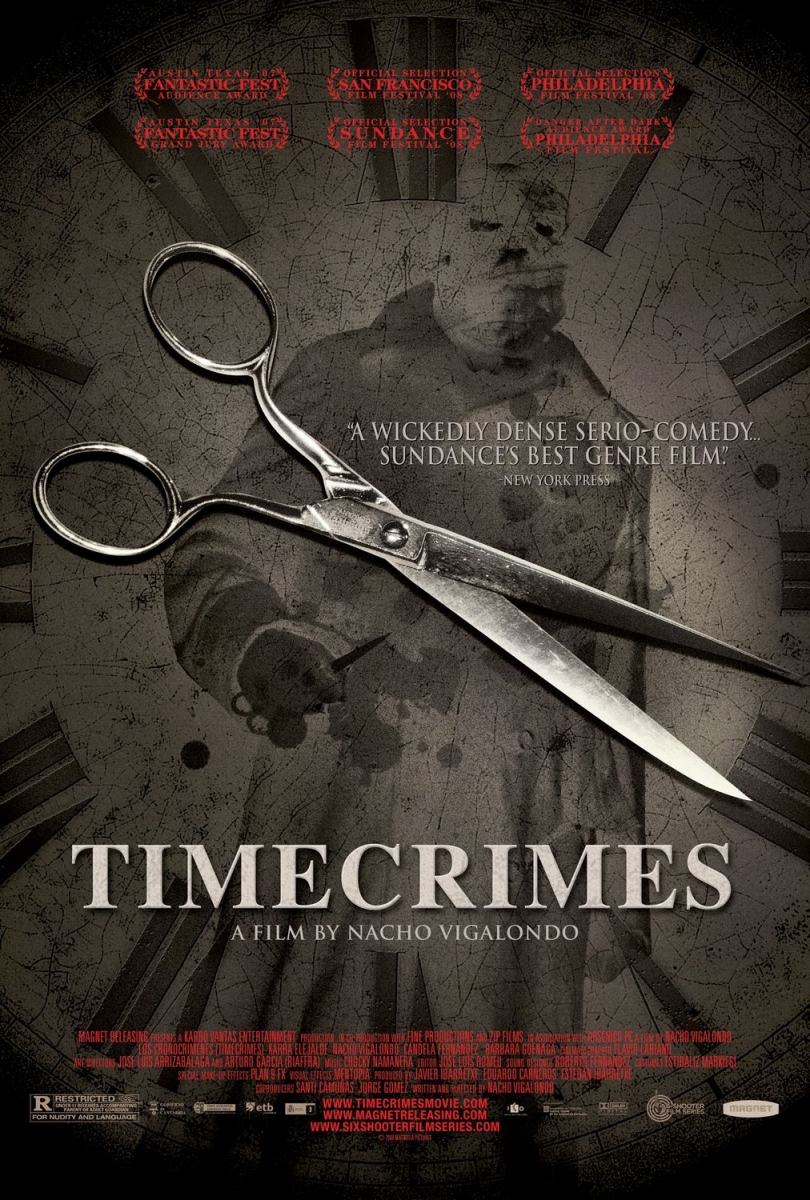 A seemingly contented man is resting in his back yard, his wife working in the garden nearby. Through binoculars, he notices someone in the trees just beyond the edge of his property. He goes off to investigate, inadvertently starting a chain of events that could destroy his life.

This is not a film about time travel. It's simply used as a narrative device to tell a horror story that could never be told otherwise. Despite the sci-fi hardware, Timecrimes is actually a story about our close proximity to the abyss.

We stumble around, gleefully ignorant of how easily our lives can be shattered. How can you be sure the next time you cross the street won't be your last?

Time travel paradoxes have been discussed to death by Nobel prize winning physicists and mouth breathing nerd types alike. Director Nacho Vigalondo (the recent Open Windows) gleefully plays with those paradoxes, using them to destroy our hero's life in increasingly elaborate ways. It must have been so much fun (and painful, exhausting work) crafting this ever worsening scenario.

But horror it is. And when it goes dark, it goes very dark. Vigalondo takes these small characters and makes them larger than life by throwing their dull everyday existence into manic, psychotic chaos. Terrible choices must be made along the way.

We're left to ask ourselves the stomach churning question: "If that was you, do you think you could get yourself out of that?"

Maybe. But maybe not.

3. The Lords of Salem 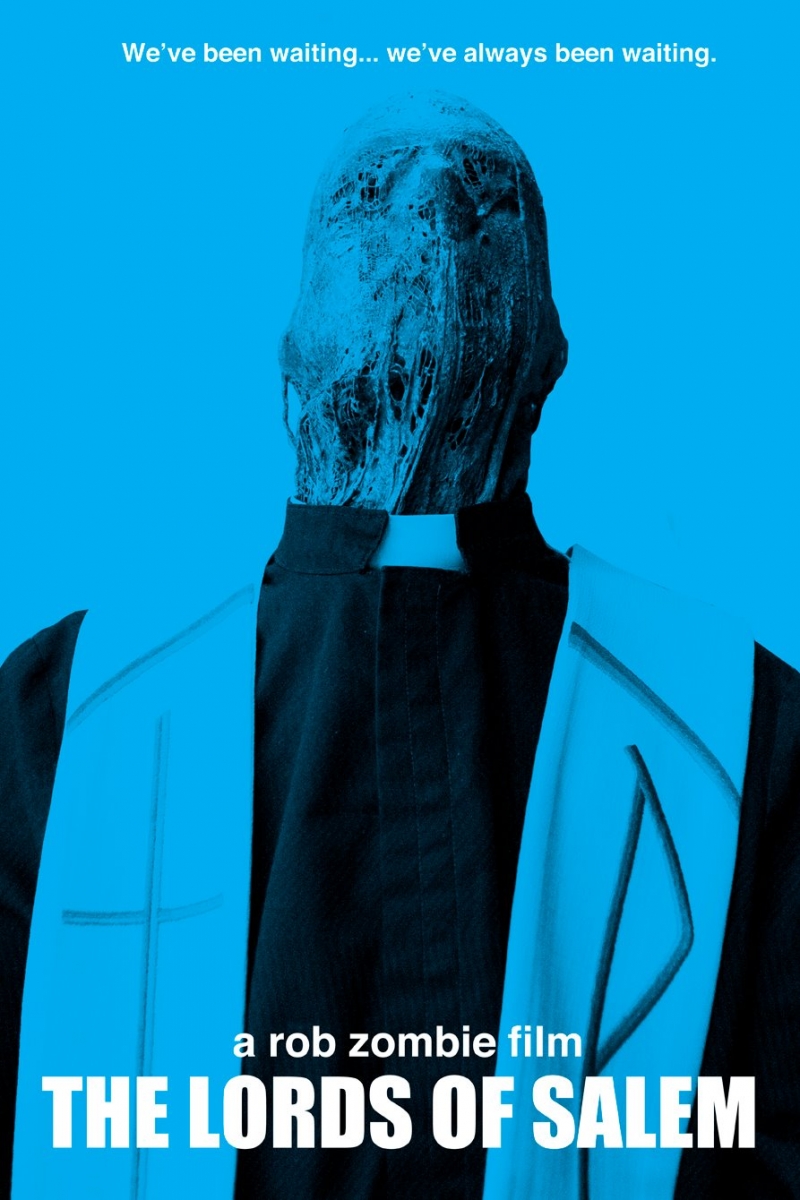 In 2012, writer/ director Rob Zombie (the disappointing House of 1000 Corpses) made his scariest film. It may not be his best. The Devil's Rejects would be a safer pick for the best. But visually, this is one of the finest and most unnerving horror films of the last decade.

Heidi (Zombie's wife, Sheri Moon Zombie) is the ball-busting co-host of a popular Boston radio show. One night, she receives a mysterious vinyl LP in the mail from a band apparently called, The Lords. When played, the record effects Heidi in disturbing ways, though her male co-hosts seem untouched by it. That's when things get messy. As you can probably surmise from the title, we're dealing with witches.

Zombie's having fun with his visuals, referencing The Shining and even directly quoting a trademark shot from Rosemary's Baby. Thankfully, what Zombie learned from those horror classics is the crucial importance of mood and atmosphere. Instead of blood and gore, he uses sound and image. I'll never forget that shot of the lights in the hallway, swinging back and forth. And that deep snarling sound.

If you go in expecting standard, schlocky horror fare, you'll be confused and maybe a little disappointed. The Lords of Salem truly kicks into gear when Zombie branches out visually, creating dazzling sequences of pure beauty and horror. The photography is meticulous and uncharacteristically composed. Gone are the endless, jerky hand held shots from all of Zombie's previous films. What remains is some of the most memorable imagery since Tarsem's horror masterpiece, The Cell.

David Lynch's Lost Highway is a film that both invites and defies explanation. The narrative creates an unsettling, but familiar mood. The seemingly cliché story tropes exquisitely twist and twist away, never slowing down for even a moment to pander to its audience.

A married couple, Fred and Renee Madison (Independence Day's Bill Pullman and True Romance's Patricia Arquette), receive an unmarked video tape on their doorstep. On the tape, they see grainy footage of the outside of their house. Someone is watching them. More tapes arrive and soon, the police are dispatched.

The detectives sniff around, asking the Madisons if they own a video camera. Renee says no, explaining that Fred hates cameras. The police ask why.

"I like to remember things my own way," says Fred.

"What do you mean by that?"

"...how I remembered them. Not necessarily the way they happened," Fred replies, tension crackling in the room.

Complete with cameos from Richard Pryor and Henry Rollins, Lost Highway is a morbid, disturbing ride through a gorgeous but poisonous film noir landscape.

Another plot emerges, a love triangle, involving Pete, a young mechanic (Balthazar Getty), Mister Eddy, a hotheaded gangster (Robert Loggia) and Alice, the gangster's gal (also Arquette). Pete and Alice are having an affair, which makes his friendship with Mister Eddy a bit uncomfortable.

Lost Highway is a film about -amonst other things- infidelity. We will see both sides of an affair-- with the guilty lovers and the jilted third party reversing roles and even surreally swapping faces. The victim becomes the accused and then, transforms into someone else entirely.

Oh and, Alice and Renee may or may not be involved in pornography.

Oh and, Alice and Renee may or may not be the same person.

It's not a traditional horror story, but horrible things sure happen. Lynch is an artist whose work and imagery can haunt like no other. My mind drifts back to those hypnotic shots of the yellow highway lines illuminated by the headlights of an unseen car, speeding through the darkness. I can still see them when I close my eyes. 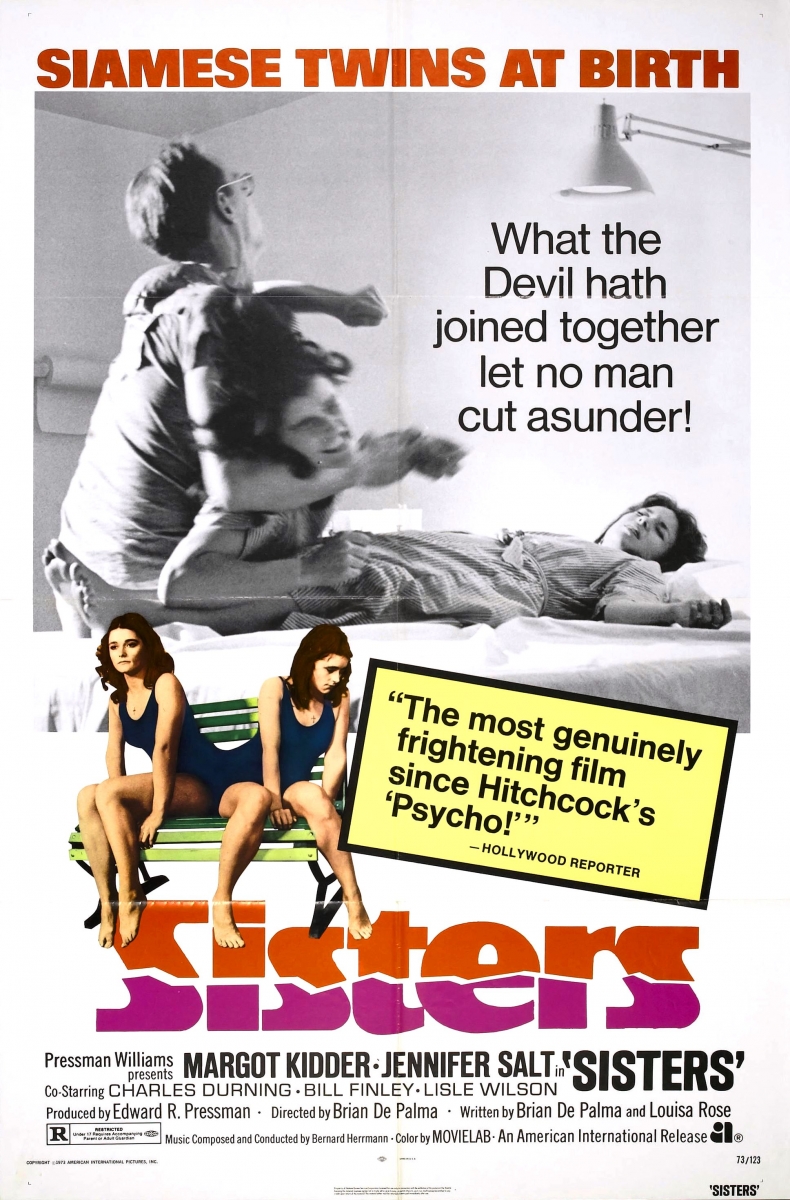 Is it a thriller or a horror film? Little bit of both. Brian De Palma's Sisters is a perfectly orchestrated exercise in style and suspense. The plot is just a wafer thin excuse to stage some of the finest suspense sequences since Alfred Hitchcock was above ground.

De Palma also injects his own personal obsession, voyeurism, a subject he would frequently explore in the subtext of his later films, such as Dressed to Kill and Body Double. But in Sisters, voyeurism is not really subtext. It's actual text. As an audience, we are watching someone, who in turn, is being watched by someone else. His photography makes the audience implicit in the crimes.

It's no coincidence that we meet our heroine, Danielle, played by Margo Kidder (Lois Lane to Christopher Reeve's Superman) on a voyeur themed TV game show, called Peeping Toms. (Which reminds me: Michael Powell's Peeping Tom is another must-see horror classic.)

Much has been written about the gruesome violence and the mesmerizing suspense, the surreal twists and the masterfully orchestrated split screen shots. But it's the casting of Kidder and actress Jennifer Salt (Play It Again, Sam) as her adversary, a plucky newspaper columnist that deserves the highest praise. The girlish, softer Kidder and the frigid, frumpy Salt brilliantly play off one another, like opposing sides of the same coin. Every element seemed to fall impeccably into place.

Sisters is like the perfect crime. Were it not for Blow Out, I would say it's his best work.

Even De Palma himself agrees. During an interview with David Poland, the aging film director shook his head while musing on the exact subject, wondering aloud: "Why can't they all be like Sisters?"