The calendar says June and for the most part the signs are all here: I've cracked out my air conditioner, I've witnessed the crowning of this year's Stanley Cup Champion, and I just completed the half marathon I run annually on Father's Day. But there is one thing that is missing this year from my routine of the previous few summers. This will be my first summer without a season of Friday Night Lights to watch.

FNL came into my life three years ago on a recommendation from a close friend. I was at a transitional period in my life: switching careers, adapting to new living arrangements, and coping through the end of a relationship. I was a little lost and I just needed something to take my mind of things. So I started attending The Church of Friday Night Lights.

Many of television's best serialized dramas (Mad Men, Breaking Bad, Walking Dead, Boardwalk Empire, Game of Thrones, to name a few) have a richness once found only in a good novel and the emotional power once found only in feature films.

Friday Night Lights is a simple and straightforward slice of life about a high school football team from a fictional town called Dillon; a small, close knit community in rural Texas. The show uses this small town backdrop to address many issues facing contemporary American culture, including school funding, racism, drugs, abortion, and lack of economic opportunities. FNL is sort of like the anti- Glee. It's real. It's plain. It's raw. There's not an ounce of irony or sarcasm. Just a group of ordinary people in small town Texas with ordinary life related problems. Shot with unflinching realism using hand held cameras and natural lighting, FNL looks and feels like real life happening before your eyes. No frills. No gimmicks.

By now, many know the story of FNL. It's based on a famous non-fiction book published in 1990: Friday Night Lights: A Town, a Team, and a Dream by H.G. "Buzz" Bissinger and was turned into a feature film directed by Peter Berg and starring Billy Bob Thornton in 2004. Following the success of the film, the television series premiered in the fall of 2006 but never found an audience despite being universally praised by critics for its realistic portrayal of Middle America.

Various campaigns to keep FNL from cancellation were proved successful as the show was somehow able to squeeze out five seasons split between NBC and DirectTV, keeping the passionate and vocal fan base happy. New fans can experience the show through syndicated reruns on ESPN, while all five seasons are also available on top selling DVDs. There is also a talk of another possible Friday Night Lights movie which would pick up with the characters from the television series. The show that was once on life support has blossomed into a full-fledged franchise.

So I began my journey through a DVD set of season one three summer ago and was instantly sucked into this small town and got involved in everyone's problems. From then until now, I've developed a crush on Lyla Garrity, admired the marriage between Eric and Tami Taylor, been moved to tears by Matt Seracen's father's funeral, felt such frustration for Buddy Garrity's mistakes, and hatred for Joe McCoy's arrogance. Sometimes I forgot I was watching a fictionalized drama, yet that's how I knew the art was so great: it made me believe I was watching a true story when in actuality is was a work of fiction. Eventually, what started out as just a fantastically compelling drama to help me get my mind off things turned into a life changing series for myself. And not in a conventional "the art inspired me to change" sort of way. But rather, I was already in the process of making changes in my personal life resulting in tons of growth. I made progression while I was watching the show but not necessarily because of the show. Over time, I noticed a shift in which characters I identified with. 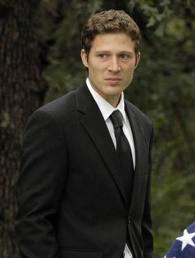 Matt Serasen is probably the guy that closely resembles the type of person I was in high school and my early adulthood, for that matter. An honest, hardworking guy; awkwardly shy with a tendency to internalize his problems. He can do it all, but his insecurity keeps him from reaching his full potential. For the most part I've grown out of my Matt Seracen tendencies but I admittedly slip back on occasion. 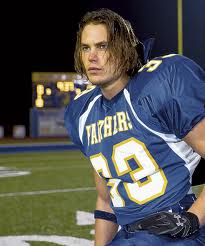 Tim Riggins is the guy who I most wished I was. Cool, laid back, didn't give a shit yet somehow found a way to score the winning touchdown and get the girl. And because I was so not a Tim Riggins in high school, I overcompensated by trying to act like one in my twenties! He was probably the archetype I was acting like when I started watching the show. It was that immaturity that got me into my rut in the first place. Tim Riggins is one of the coolest, interesting and most complex anti-heroes ever to grace the small screen. Sometimes I forget that he's only 17! When you hit thirty, it's not that cool to be acting like Timmy Riggins anymore.

Coach Taylor is the man I wish to become. Straight shooting, diplomatic, stand up man. Never takes shortcuts and always tries his best. Whatever he gets in life he deserves, and if he doesn't he'll manage. Everything that's good in the world is embodied in Coach Taylor. He's not a saint, and his life is not without its stress, but he often finds a way to get things done often by putting others needs in front of his own. Whether it's satisfying the needs of his wife, providing guidance on and off the field for his players, or being a role model for his teenage daughter, Eric Taylor is a man for others. 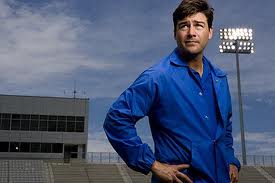 Something happens in a person's life when they go enter adulthood. Adulthood doesn't start by a date on the calendar, or when you begin to grow hair in unusual places. It doesn't even begin when you have a child. Literally? Perhaps. But psychologically and emotionally, adulthood begins when one makes the decision in their mind to accept the fact.

I legally became an adult (gasp!) fifteen years ago. Yet, I psychologically became one about 2 years ago. My parents got divorced when I was 13 and my father died when I was 22, so that dominant male figure wasn't around full time to teach me about all that man stuff during those pivotal years. I looked up to alternative male figures: teachers, coaches, my older sister's boyfriends, older co-workers and bosses, even celebrities. Eventually, I was getting older and older and still kept looking up to those people little realizing it was stunting my growth. What started out as a legitimate excuse (not having a father around) eventually became my crutch not to grow up and accept adult responsibility.

Two years ago, the three things I most identified myself with (relationship, job, house) were gone and I was alone and depressed and had to start over. I thought to myself, "Boy I could really use a dad right about now!"

Where was my Coach Taylor? All those helpful people from my past were nowhere in sight to bail me out of this one. Then I realized why. This was the time in my life when I'm supposed to become the father figure.

That was when I went from being a Tim Riggins to a Coach Taylor.

There are two stories that are going on when someone is watching a film or a show. The story that is occurring on the screen and the one that is being taken in by its viewer. The interpretation, if you will. Every experience is different and will often be influenced by what kind of baggage you bring to the viewing. The baggage I brought to Dillon, Texas was that of a lonely young man who was a little lost and needed some much needed guidance and a little growing up to do. Friday Night Lights came into my world at the right time and place and might not have affected me as much if I discovered it at a different stage in my life.

It's okay if the lights are not there to guide me through my Friday nights. I don't need them anymore.

Happy Fathers Day, Dad. I have officially become you.