A red minivan pulls into the parking lot of Best Quality Vacuum. We know this minivan. It is the same one that Walt jumped into at the conclusion of last week's "Ozymandias". The driver, Ed (Robert Forster) opens the door. Instead of Walt, we find Saul Goodman (Bob Odenkirk) dragging out suitcases. Yep. Even 'Better Call Saul' had to make himself disappear.

Soon, Ed is taking Saul's photo for his new drivers license-- a new identity. Saul will need to stay in the vac shop for a few days, lay low. Oh... and he'll have a roommate.

Ed points to a surveillance monitor. "You be the judge."

On the screen: Walter White paces around a tiny, gray room. A room not unlike a prison cell. He slaps at the light fixture, his hatred and frustration boiling over. 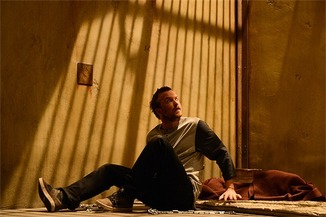 Over at the Nazi redneck compound, Jesse's taped confession is mocked by Uncle Jack, until Todd's name is mentioned. Remember Drew Sharp, the dead dirt bike kid? As Jessie's describes Todd's brutal murder of this innocent child, the camera lingers on the redhead, who seems proud that Uncle Jack and his co-fascists get to witness such an honest account.

But Uncle Jack snaps and grabs a pistol, intent on killing Jesse Pinkman once and for all. But Todd ("...that Opie dead-eyed piece of shit...") jumps to Pinkman's defense, reminding his Uncle that they could squeeze in a few more cooks, a few more batches of blue-gold, before putting him out to pasture. Uncle Jack sees through his nephew's deception: "It's that Lydia! You're sweet on her!" Indeed he is. Pinkman is spared. For now.


Meanwhile, in his personal dungeon, Jesse gazes at the photograph of Andrea and Brock, his lone and fading beacon of hope. He is so out of it that it takes a few moments to realize that the paperclip on the photo could be his ticket out of Redneck-Land. He bends the clip and attempts to pick the lock on his handcuffs.


And now, a glimpse inside the personal hell of Saul Goodman: Confined within that same prison-like room, Saul watches cautiously as Walt details his plan of revenge. He wants to get his money back from Todd and Uncle Jack, killing them all in the process. That money belongs to his family, Walt insists. "What I do-- I do for my family."

Saul reminds him, that even if he gets the money back, delivering it to his family would prove impossible.

After a remarkably unpleasant day in court, Skyler returns home to smoke (once her only available form of protest against Walt's criminal activity) glancing out the window at the police car parked up the block, watching the house. Baby Holly cries from the other room but, when Skyler goes to check on her, she is greeted by three men in black ski masks. (Todd and Co.) They warn her never to tell the police anything about Lydia, whom she met at the car wash. Skyler agrees, if only to protect her family, or whatever is left of it. 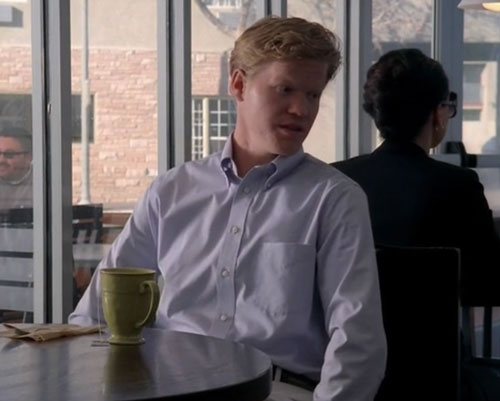 Todd, dressed all fancy in a cheap blue button-up, meets with Lydia at a coffee shop. She doesn't seem confident of Todd's warning to Skyler, so she announces that they will no longer be doing business together. But Todd protests: "We have fifty pounds, ready to go. It's 92 percent!" This stops Lydia: "92? That's Heisenberg levels." Todd explains the Pinkman situation. Despite the complications, Lydia now has dollar signs in her eyes. Big, blue dollar signs.

Walt arrives in New Hampshire, now under the alias of "Mr. Lambert". He surveys the area: It's a small cottage, snowbound, in the middle of no where. No TV. No phone. No internet. Just a DVD of Mr. Magorium's Wonder Emporium. (Make that 2 copies.) Deliveries of food/ supplies will come once a month from Ed.

This is solitude. This is true, bleak and unending loneliness. Another prison-like room for Walter White. As Ed explains the ensuing fall-out from what has become a nationwide manhunt, Walt realizes: "What's to stop me from walking out of here?"

Ed replies, solemnly: "Nothing. There's a little one horse town, eight miles down the hill. There is nothing on God's green earth that I can do to stop you from going down there. All I'm saying is, if you leave this place, you will get caught. And if I find out that you've left the reservation, I won't be coming back."

After Ed leaves, Walt immediately stuffs his coat pockets with cash, dramatically doffs his Heisenberg hat and makes a bee-line for that aforementioned one horse town. But he pauses at the gate, coughing. "Tomorrow," he promises himself, returning to the cabin.

Jesse continues his attempts to escape the redneck compound when he is interrupted by Todd, who brings him ice cream as a reward for the newest meth batch, which clocked in at a whopping 96 percent purity. Todd seems to have a soft spot for Jessie, which is how Jesse convinces him to leave the tarp off his cell cover for the night. Not a wise move by the redheaded redneck, as Jesse escapes his cell and dashes for the barb-wire topped fence. But before he can jump the fence, his captors surround him. "GO AHEAD! DO IT! JUST KILL ME NOW, GET IT OVER WITH! There is no way I'm doing even one more cook for YOU PSYCHO FUCKS!"

What happens next is almost too awful to describe. The baddest moment of Breaking Bad, thus far: Todd knocks on Andrea's door. When she answers and he casually beckons her outside, name-dropping Jesse. We see that Jessie is watching from the van across the street, his mouth gagged. It's around this point when Todd pulls out a silenced-pistol and shoots Andrea in the back of the head. Jesse loses his mind, screaming like a dying animal. Uncle Jack tells Jesse to shut up, reminding him that Andrea's son Brock is still alive. Jesse is emotionally destroyed, sobbing, utterly helpless and tortured. 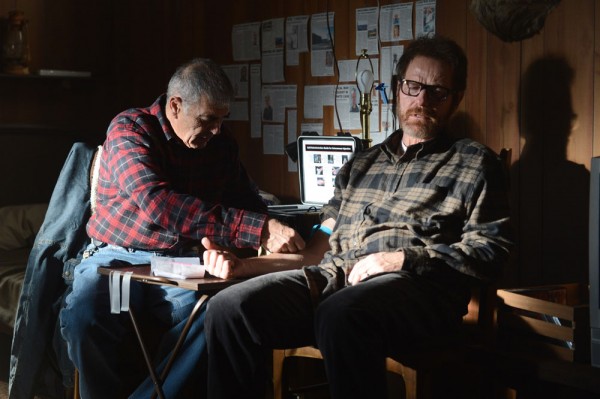 Back at the cabin, Ed arrives with a supply delivery. Enough time has passed that Walt's hair has grown back. News on the home front is not good. Skyler has been forced to take a job as a taxi dispatcher to pay the bills, forcing her to leave baby Holly with a neighbor during her shifts. Walt can barely react before it is time for his chemotherapy, with which Ed assists him. Sadly, Walt asks if Ed could stay longer. He offers him ten thousand dollars for two more hours of company. But Ed will only provide one more for that amount.

The money, the very reason that Walt threw his entire life away, becomes less valuable with each passing minute in that tomb-like cabin.

The cancer has taken so much weight from Walt's body that his wedding band falls off, rolling on the floor. He retrieves the ring and ties it around his neck with some twine. His bond with Skyler is still meaningful to him. He could not bear to be away from this trinket of a past life, this tiny symbol of a love that was once so pure. He hugs it to his chest. Before long, Walt is stuffing a box with money and finally making that eight mile trek into town.

"Flynn White, please report to the principal's office..." Walt contacts his son (under the guise of a phone call from Aunt Marie) from a seedy local bar. Walt wants to send this box of money to his family and tries to make arrangements through Flynn. At first his son listens but, eventually he flies into a rage: "You killed Uncle Hank!"

Walt pleads with his son, whose real name is not Flynn but, Walter Junior: "Please, please take the money. This can't all have been for nothing!" The call ends. It's then that Walter realizes that he no longer has a son.

The next call Walt places, slack jawed with hopelessness, is to the DEA. "I'd like to speak to the agent in charge of the Walter White investigation."

"May I ask who is calling," the operator asks. 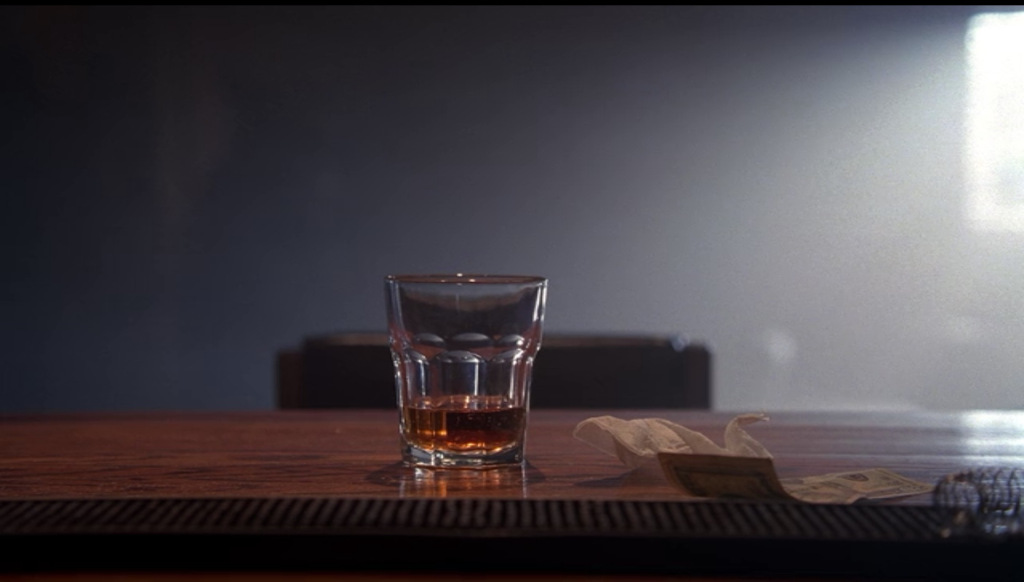 He puts down the phone and orders a drink from the bar. It's over. It would appear Heisenberg has surrendered. Then, on the bar TV, he sees his former partners at Gray Matter being interviewed by Charlie Rose. They lie, minimizing Walt's former role in their company. Walt crumples a napkin in his fist. A striking music cue hits, one not dissimilar from the show's opening theme song. His eyes narrow.


Outside the bar, police cars arrive. The officers storm the building, shotguns raised. But instead of finding Heisenberg, they find a half empty glass of booze. Walt is gone. And as mindful viewers will recall, he still has a giant machine gun in his future. This ain't over. Not by a long shot. Walt has never gone down without a fight.

But this time, I have a feeling it will be less of a fight, than a massacre.