One of Breaking Bad's most unsettling moments takes place in the third episode of season five. Skyler (Anna Gunn) lies in bed. The sounds of nearby gunshots are audible. She goes to the living room, where she finds her husband Walter (Bryan Cranston) and their disabled son Walt Junior (RJ Mitte) laughing gleefully as they watch Brian De Palma's Scarface on TV. On the screen, Tony Montana (Al Pacino) readies for an ambush that will -spoiler alert- lead to his ultimate (and very gruesome) demise. The guys laugh as Tony loads his gun. Skyler watches this play out from the edge of the room, tears quietly clinging to her eyes. "Everybody dies in this movie," says Walt. 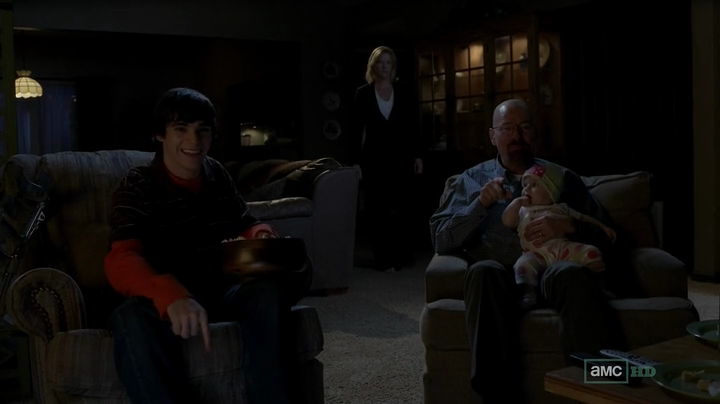 I fear there is no light at the end of the tunnel. In the beginning, this was solely about making money for Walter White's family to survive on, in the event of his death. But these changes have not only turned him into a criminal but, have begun to bleed into his personal life as well. Walt is now a selfish, calculating snake. The transition from high school chemistry teacher to hardened meth dealer was not an easy one. But he adapted. And now, with his lung cancer in remission, he may survive this series. His marriage will not. His wife Skyler, as early as season three -- saw that her husband had evolved into some kind of soulless monster. But most tragically, she doesn't even know half of the things that he has done.

Nor does Jesse Pinkman (Aaron Paul), who has more reasons to kill Walter White than any cartel kingpin and he doesn't even know it. The betrayals are too numerable to mention in detail. But I will say this: Breaking Bad is undoubtedly the first TV show in history to feature a main character that has poisoned a young, defenseless child-- and maintained a wide audience. If only Pinkman knew...

But no matter what happens, he will always remain the perpetual student to Walt's teacher. Recall that scene in Jesse's car, when he eagerly shows Mr. White the first batch of blue meth that he cooked all by himself. He grins, waiting for a pat on the back. But he doesn't get one. Instead, Walter screams at him, demanding to know why Jesse would cook his meth formula without permission. But that was just one drop in a fountain of abuse. I don't care how many times Walter says it-- lying through his teeth, he and Jesse will never be equal partners.

And yet this season, that very dynamic between Walt and Jesse was changed. With Gus Fring (Giancarlo Esposito, who deserves an Emmy) out of the picture, they found themselves with a new business partner, though admittedly a reluctant one. The character of Mike is one of the show's most fascinating. To describe his job, I must quote a Morgan Freeman line from Nurse Betty (Such an underrated film). Mike is "a garbage man of the human condition." He kills those he needs to kill. He spares those he needs to spare. But all the while, he is just a workin' man, lookin' for a paycheck. We see him playing with his grand-daughter, dismayed to be called away from his family on such unpleasant business. But he needs the money-- a theme that pervades almost every scene of Breaking Bad. Everyone has a noble reason to justify and excuse their not-so-noble actions.

But it's never enough money. Never enough meth. Nor will it ever be. They must always make more. Note the scene (S5-E3) in which Mike divides up the money from their first batch of new meth, and we watch Walt and Jesse's piles of cash get smaller and smaller. This is no longer a means to an end. This is now an established business, with expenses. But without the loving embrace of his family, the money is valueless -- a fact that Walt seems to have forgotten. Things have changed, irreparably.

The Walter White from those flashbacks in season one -a fresh faced chemistry geek in a crappy sweater- is gone forever. In his place, we have a villain, whose cold eyes stare out from behind wire-rimmed glasses, regarding the world the way a lizard regards a fly crawling over a rock. There is no hope left to be found.

In an interview, Cranston stated that –from day one- show creator Vince Gilligan's objective was to turn "Mr. Chips into Scarface." I laughed, thinking it was merely a funny way to quickly explain the show's plot. But Walt, Skyler and company are in many ways, the stars of their own movie. A movie that -like Scarface- is not likely to have a happy ending. But unlike Tony Montana, I fear that Walter White may be the only person to go unpunished for his sins. His family-- dead and bloody on the slab, piles of money still collecting beneath his feet.

What if, in the end-- everybody dies in this movie, except for Walt?

Breaking Bad airs Sunday nights on AMC. The Finale of the first half of Season Five airs September 2nd.