You get the impression that no matter the story... if it begins within the world of Joel and Ethan Coen's Fargo, all must inevitably turn to blood and violence. If it wasn't so damn enthralling, you might just feel bad for these poor saps.

Set in Bemidji, Minnesota in 2006, the pilot episode introduces us to Lester Nygard (The Hobbit himself Martin Freeman) and Lorne Malvo (Billy Bob Thornton, a Coen brothers vet after the criminally under-seen The Man Who Wasn't There). Lester is a henpecked husband, disillusioned with both his wife and his life following a nasty encounter with a former (and pathetically current) high school bully. 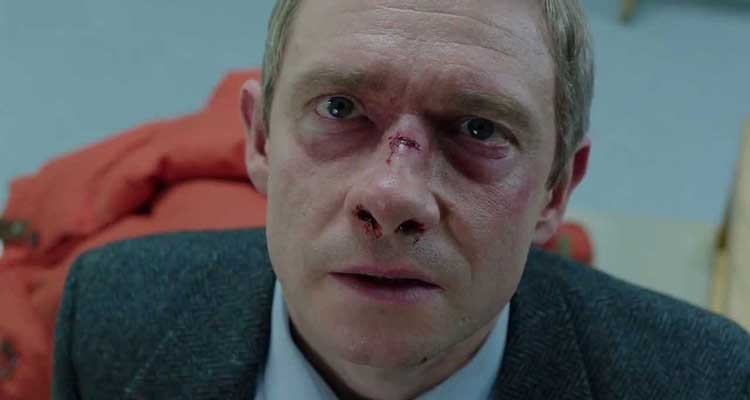 However, Mr. Malvo is harder to read. He arrives in town after running into a ditch, thanks to a deer, which allows the naked man locked in the trunk of his car to escape. But he does not give chase. His motivations remain mysterious and unknown in the pilot. It is only when Nygard and Malvo finally meet that the wheels are set in motion.

The announcement of this TV adaptation, produced by FX (critically acclaimed hits like Louie, Sons of Anarchy and Justified) felt to me like a double edged sword. If someone was going to remake Fargo as a TV show, we'd hope that it would be FX, HBO or Showtime, any cable network that would allow the program to maintain the film's unabashedly dark tone. But the idea of Jerry Lundegard, Marge Gunderson or Carl Showalter being --recast, redone, re-anything-- initially seemed ludicrous to me.

It was the mere notion of remaking that story: "Oh and here comes the new version of the wood chipper scene..." At best, I felt that it was a miscalculated idea.

Thankfully, FX and show creator Noah Hawley along with executive producers Joel and Ethan Coen went in a different direction.

Instead of retelling that same story, they let us revisit that world, meeting new faces who just might have lived up the block from the Gunderson family in the 1980's.

FX's Fargo certainly captures that grim tone but in bizarre new ways. Billy Bob Thornton's Malvo is a far more intelligent criminal than his cinematic equivalents. He is a sick, darkly playful and manipulative man, just as likely to prank a motel clerk as he is to prank someone he's about to murder. In fact, based on the pilot, he seems to have more in common with No Country For Old Men's Anton Chigurh (Javier Bardem in an Oscar winning role) than his criminal predecessors played by Steve Buscemi and Peter Stormare.

The show has unquestionable similarities to the film but, this intentional distance allows the two projects to remain self-contained. Meaning? If you love the movie, the show will not ruin that. Just seen the show but, haven't seen the movie? Don't worry, no spoilers here or in the show. Unlike the tonally comparable Twin Peaks and it's companion film Twin Peaks: Fire Walk With Me, it does not matter in which order you view the original Fargo or FX's Fargo.

Running only 10 episodes, a mini-series not unlike recent critical smashes American Horror Story and True Detective (The Yellow King, anyone?), we can ostensibly expect a brand new story and cast of characters for the next season, which is a good thing. We know that we have a firm beginning, middle and end to this first story. On network shows, we far too often encounter the narrative equivalent of treading water, leaving the audience with the feeling that some episodes were written as 'filler'. Hopefully, this mini-series structure will eliminate that problem. 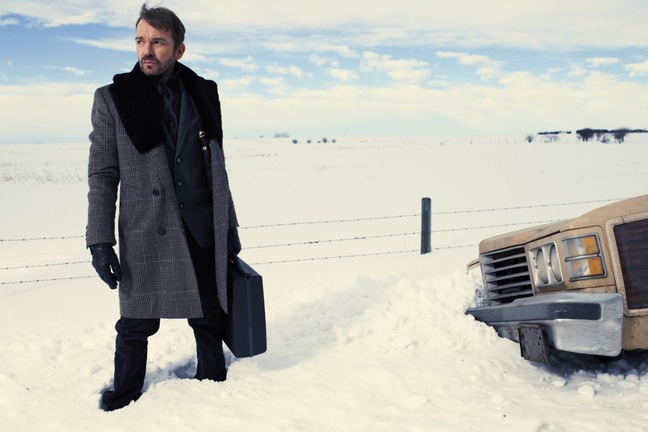 Note the piece of music that opens the pilot. At first, I was annoyed that it wasn't Carter Burwell's "Fargo, North Dakota", a stunning piece of cinema score. Instead, the show begins with something musically similar, obviously echoing the Burwell piece. But that annoyance quickly wears off as the show immediately and confidently establishes itself as it's own beast. Like a hapless fish, we're hooked right from the get-go. The show, like the piece of music, will be familiar to hardcore fans... but not quite. And that's where FX's Fargo gets interesting.

Joel and Ethan Coen have made some of my favorite movies, underrated comedic gems like Raising Arizona, cult classics like The Big Lebowski, Academy Award sweepers like No Country For Old Men (and Miller's Crossing and Blood Simple and Barton Fink and A Serious Man and...) but, their masterpiece is Fargo.

Despite the goofy accents, kindness bordering on stupidity and that quaint snow globe setting (all the accoutrement that make up "the Fargo brand" for lack of a better term) --a shocking, grim sense of humor and a tremendously warm heart lies twisted beneath, Yin and Yang.

Fargo is a solid pilot that contains a handful of smart, nuanced performances. So far, so good.

I mean, aw jeez, what more could ya ask fer?

PS: The scene between Thornton and Colin Hanks at the end of episode one? Chilling. So goddamn scary.