Horror films are a dime a dozen and the good ones are becoming increasingly difficult to find. Well, no need to fret over your pillow case of candy. We've found five great ones. In the interest of full disclosure, we were originally going to title the article Top Five Horror Films (That You've Never Seen) but that would've been far too presumptuous of us, so we added the Probably. Just because it's Halloween, doesn't mean that manners aren't important. So, you're welcome! And Happy Halloween from Showbiz Monkeys!

After the accidental death of their young daughter, a married couple played by Donald Sutherland and Julie Christie, move to Venice in an attempt to overcome this tragedy. Directed by a master of odd 70's cinema, Nicolas Roeg (Walkabout, Performance, The Man Who Fell to Earth) Don't Look Now immediately establishes a feeling of dread and never lets up until the last disturbing frame.

The daughter's death hangs over the film and over Venice like smog in the air. John is an architect, restoring an old Italian church when he begins to notice a child who looks very much like his daughter running around Venice, day and night, wearing a red raincoat. Meanwhile, his wife Laura befriends a blind psychic who says that she can see their dead daughter in the room. Has their child's ghost followed them all the way across the ocean?

All of this leads to a horrific and bleak twist ending that has become legendary in movie geek circles. Do your best to avoid the spoilers. This is a twist worth waiting for.

On a non-horror note, at the time of its release, Don't Look Now caused an international uproar because of an extremely graphic sex scene between Sutherland and Christie. In fact, many audience members believed that the scene featured non-simulated sex, although Sutherland has repeatedly refuted that notion. (By today's standards, you have seen far more graphic sex scenes on HBO.)

For this superficial reason, it has become one of those films that trendy people say they have seen, even though they actually have not. Don't Look Now is a much talked about but, little-seen 1970's horror classic. See it.

A serial killer with a taste for necrophilia begins stalking the streets at the same time that a college student (Ewan McGregor) lands a job as a night watchman at a downtown morgue. There, he will get a front row seat to watch this psychopath's work. The plot is classic B-horror flick cheesiness but, regardless, Night Watch is a darkly effective, creepy little gem. 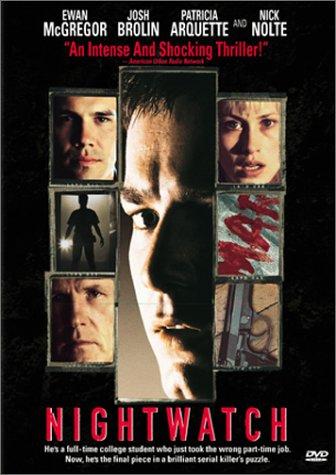 Our hero learns about an alarm system that has been installed at the morgue. If one of the corpses wakes up, off goes the alarm. But thankfully, nobody has ever woken up. Not yet, at least. This set up works like a ticking time bomb. We know that it's coming. We know that eventually, that alarm is going to sound. Some of the screenplay's turns might seem clunky but, Night Watch does not pull it's punches, heedlessly flaunting it's grim tone.

This is a queasy, sticky, unsettling film. You would not feel comfortable putting your jacket down in the majority of the scenes in Night Watch-- every flat surface is either damp, dirty or both. Based on a Danish film of the same name, unseen by me, director Ole Bornedal (who also made the original) collaborated with Steven Soderbergh on the American version of the script. The results are top notch.

The non-horror elements work just as well as the spooky stuff. Especially a (somewhat) comedic sequence involving McGregor, his best friend (Josh Brolin) and a hooker in a fancy restaurant that becomes very inappropriate very fast. But much like House (spoiler alert for this very list), Bornedal uses these fleeting moments of comedy to keep his audience off guard. Despite the fact that it has become utterly forgotten by audiences and critics alike, Night Watch is a superbly under-praised B-horror film.

Dude: Mandy Lane is the hottest girl in school. And dude: She just agreed to go to your cabin party this weekend. But dude, before you get too excited, I must inform you: This is not a comedy, despite the numerous "funny-dude" lines peppered throughout the screenplay. If you're expecting booze, nudity and fart jokes, you've got the wrong film, dude.

This is a far more intelligent piece of work than the unimaginative poster-art might lead you to believe. All the boys use the same cheese-dick line on her: "You're different than all the other girls." Damn right. Played by the impossibly beautiful Amber Heard (The Rum Diary), Mandy Lane is the ultimate unattainable It-girl, so sexy, so sweet and so shy.

The story of a group of young, misguided dudes all competing for Mandy's affection would have been more than enough of a story for me. But when the genre tropes arrive-- the blood starts flowing and the bodies start piling up, that is when All The Boys Love Mandy Lane comes into it's own.

It was directed by Jonathan Levine, who went on to great success with little hits like The Wackness and even mainstream critical smashes like 50/ 50. This film, his debut, was unjustly shelved by the studio until 2013, when it received a pathetically limited release. This is a flick that truly deserves to be seen. All The Boys Love Mandy Lane is one of the finest horror films of the last decade, dude. 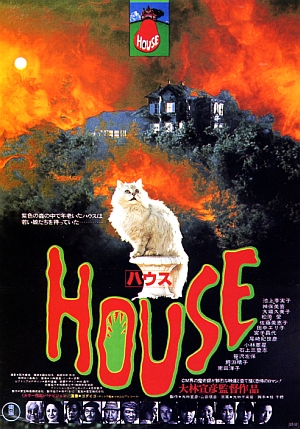 This is the only film on the list that I wouldn't necessarily classify as traditionally scary. To call this movie bat-shit crazy would be an insult to bat dung. This is undoubtedly one of the craziest films I have ever seen. And I've seen movies that were directed by Prince.

The plot follows a group of teen girls (Not the only film on this list to feature teenagers on a day-trip that leads to their untimely deaths) spending the weekend with an elderly Aunt at her house with her cute, fluffy cat. The girls are all classic archetypes: Prof is the nerdy one, Melody is a singer, Kung Fu is a martial artist, Mac is the chubby one, Sweet is kindhearted and Fantasy, the main character, is always daydreaming. As you can see, there was no room for subtlety in the lean 90 minute running time.

Shot almost entirely on Technicolor back-dropped sets at Toho studios, House quickly descends into break-neck gory surreality, where we will discover (amongst many other things) that the Aunt is dead, the house is alive and that adorable cat has sinister powers.

A great example of the film's tone can be found in the scene where one of the girl's severed heads is found at the bottom of a well. The head promptly wakes up and bites one of her still living friends on the butt. The high speed tonal changes from horror to comedy keep the audience on their toes, never alerting you of the next shift back into the macabre. House is the scariest, craziest and funniest film ever made (and a high-water mark in Japanese horror cinema), that also features a cute li'l kitty as one of the baddies. 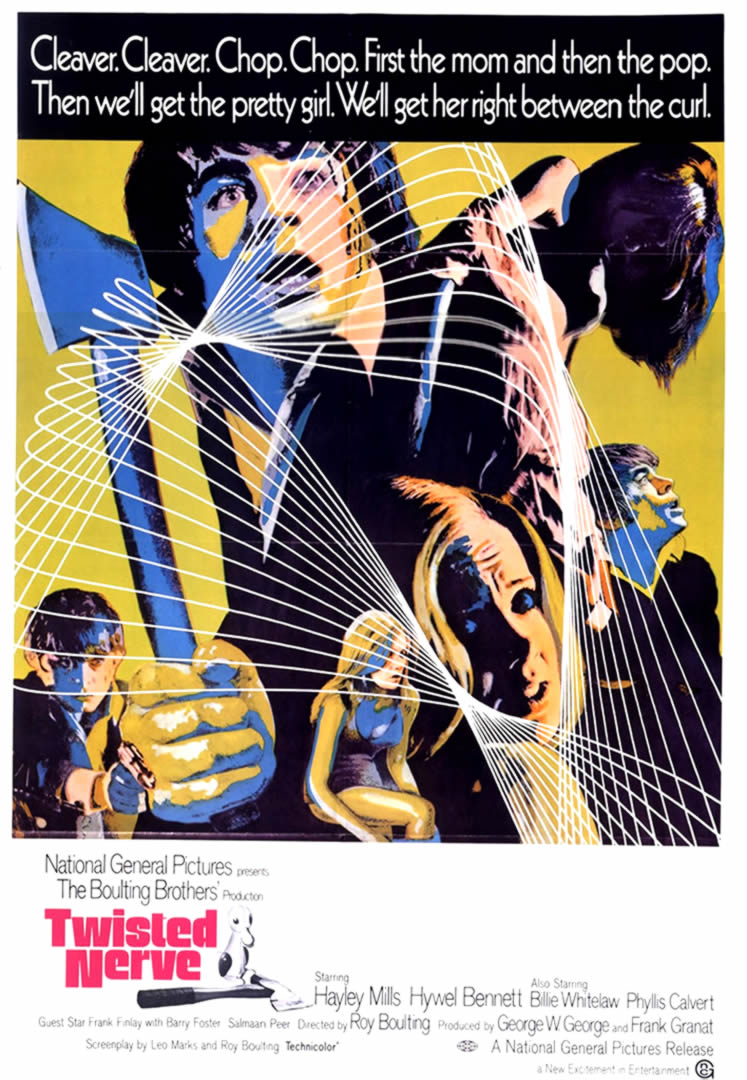 This is like the creepy, deranged Hitchcock movie that Alfred never made. It is most well known for it's whistle theme, used prominently in Quentin Tarantino's brilliant Kill Bill and then re-used in Ryan Murphy's overrated politically correct horror-schlock fest, American Horror Story. However, I can assure you there are far more interesting things about Twisted Nerve than just that short piece of music.

The plot is incredibly controversial, even for 1968. Martin (Hywel Bennett) is a young man living in London, who falls in love with a beautiful girl named Susan (the lovely and elegant Hayley Mills), under the guise of being a mentally handicapped chap named Georgie. (Yes, you read that correctly. Martin is playing pretend.) Susan is very sweet and thus, reluctantly becomes friends with 'Georgie'. Martin wants this relationship to evolve into love but, he knows that Georgie will never get the gal, so to speak. Quite the predicament.

We are forced to watch as his dreams of love are dashed on the rocks. Early on, he poses in his mirror, disgusted by his slight frame. He destroys the mirror, his self-hatred bubbling over. Martin is a social misfit of the most dangerous kind. We know from the beginning that he is our villain. Anytime he is alone with Susan, we anxiously fear for her safety. The threat of his violence is an ever present concern for the audience. But our heroine remains blissfully unaware, spending more and more time with Georgie, this seemingly amiable, seemingly mentally handicapped man-child. That is, until it is much too late.

Like watching a slow-motion car wreck, you can anticipate the violent impact before it even happens. But you don't have to take my word (or LeVar Burton's) for it: Let's close with a quote from the great Edgar Wright (See: Hot Fuzz director's commentary) "Twisted Nerve should be considered a classic British film." It's just a damn shame that it is not.