The Painter And The Thief (Clip)

The horror genre is a prolific one. We've all seen a thousand different movies that claim to be scary. But these days, we'll usually settle for shocking or merely disturbing. Seeing a guy hack off one of his own limbs (or in that case of Saw, wimping out and not showing us) has pathetically become the industry standard. Sure-- the lack of gore in the Paranormal Activity series is refreshing but, lets be honest-- everything else about the Paranormal Activity series is the opposite of refreshing.

You may disagree. In fact, we could debate these points all night long. But instead, let's just get to the Top Five Horror Movies (That Are Actually Scary). 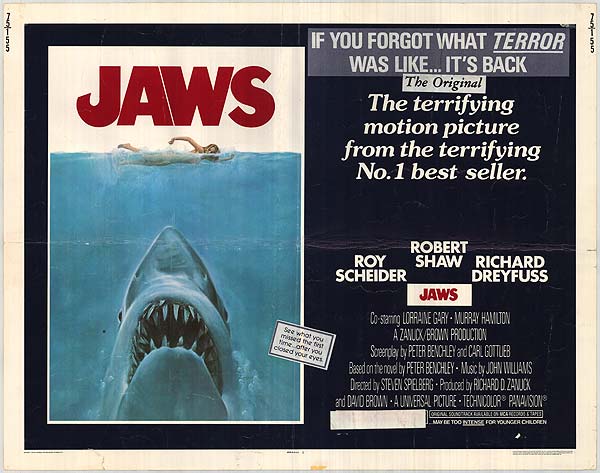 "I'm pleased and happy to repeat the news that we have, in fact, caught and killed a large predator that supposedly injured some bathers. But, as you see, it's a beautiful day, the beaches are open and people are having a wonderful time. Amity, as you know, means 'friendship'." –Mayor Vaughn (Murray Hamilton)

This might be the least Halloween-y entry on this list but, it is undoubtedly the most viscerally effective. The original summer blockbuster, Jaws is from start to finish, a near-perfect horror film. The stories of the film's difficult production are the stuff of movie legend, constantly told and retold in proper geek circles: Steven Spielberg's lack of big budget experience at the time. Robert Shaw's problematic on-set drinking. And of course, that infernal shark, Bruce -- that hardly ever worked the way it was designed. It's a wonder the movie turned out as well as it did. But the film's lingering after-effect is a major component of its success.

For me, the moment that best illustrates this, takes place after young Michael Brody has received his birthday present from his loving parents: A small sailboat. He and his pals take the boat out and sure enough, find themselves encountering that pesky fish. This sequence gets a bit bloody, as a friendly Samaritan on a nearby skiff attempts in vain to help the kids but, ends up one leg short for his troubles. The moment we've all been waiting for? Now in the water, his boat overturned, the Samaritan struggles to get back onto the boat but, from beneath the waves, we see a faint outline of something... something very big. Its jaws agape, the great fish bites down and drags the poor guy to his screaming death. That sequence left a mark on me.

Even today... even if I'm just swimming in a fresh-water lake -- a sudden twinge of panic can set in at any time. Its irrational but, that doesn't make it any easier to overcome. Why? Because I am submerged in water, my feet unable touch that elusive sandy bottom through the dark, icy waters. But, this fear is not a result of growing up in a beach community or witnessing dozens of shark attacks as a child. Far from it. It is simply because I have seen Steven Spielberg's Jaws. Many, many times.

You could even throw Werner Herzog's Grizzly Man into this category. They're both chilling cinematic reminders of what can happen to (stupid) humans when they boldly go where usually only man-eating wild beasts have gone before. There are a few axe wielding maniacs on this list but, only one animal. 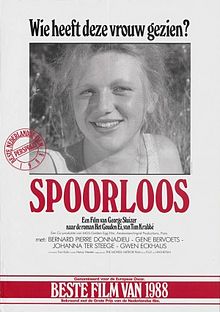 "Have You Seen This Woman?" –The Vanishing; poster translation.

Do not watch the American remake. Please don't. Dismiss the fleeting charms of Jeff Bridges and Sandra Bullock, I beg you. Their performances may be adequate but, the writing is garbage and the ending is an embarrassment. The original 1988 Dutch film is one of the most finely orchestrated pieces of horror filmmaking of all time. It is a gradual accumulation, the events of The Vanishing -- things start out wonderfully but, then they get worse. And worse. Like a snowball rolling down a hill, driven forward by its own physical momentum, what is coming cannot be stopped.

A young couple -on a European road trip- stop for food at a highway rest area. The girl goes off to use the restroom. The guy waits for her. But she never comes back. We will never see her again. This story is not about the couple. It is about the aftermath of the girl's disappearance and, the great and dangerous lengths, to which her boyfriend will go to find her. The film builds to a moment of horrifying bleakness, a plot-turn that must be seen to be believed.

The Vanishing's twist ending is delivered not so much as a twist as it is a vicious, emotionally scarring kick to the teeth. Talk about adding insult to injury. What we come to realize in the end, is that pure unblinking evil certainly does exist all around us. Unlike Jason Voorhees from the Friday the 13th flicks, the villain in The Vanishing does not have a creepy mask to easily indentify him. He is hidden in plain sight, a vicious wolf in a cuddly sheep's clothing-- to drop a double cliché.

All that our hero wanted was his girlfriend back. He asked question after question. What happened to her? It wasn't long before he regretted ever asking. 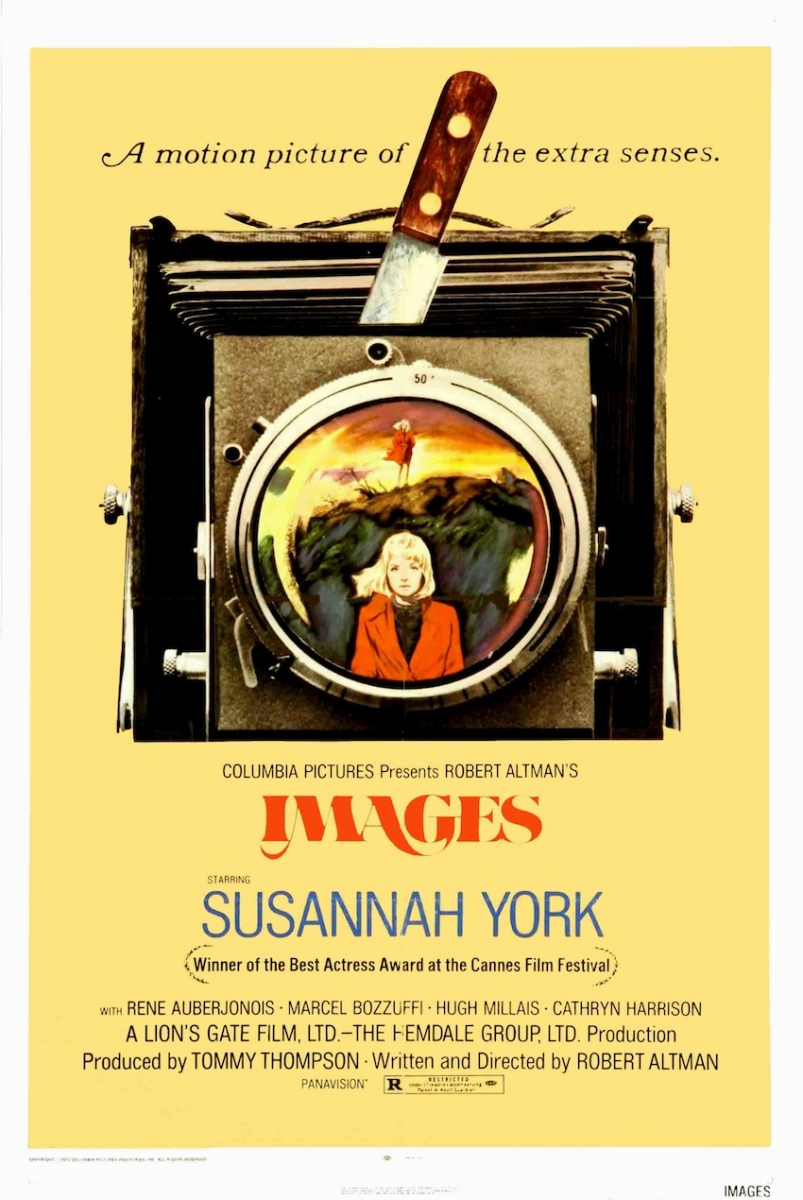 The answer is a very firm no and that is precisely what fuels the horror of Robert Altman's Images. Fear of something like the shark in Jaws is perfectly understandable. That's nature. But in Altman's film, the reason is not so easily explained. What if something horrible started happening to you -- something that you could never dream to comprehend without months of in-hospital doctor's care? And worse... What if you were too afraid to tell anyone?

We are presented with a first person narrative, following a woman named Cathryn, who is spending some time at a country-house with a few of her family and friends. The one detail the audience is never explicitly told is that Cathryn suffers from schizophrenia. There is a possibility that we do not know because she does not know. That is when things begin happening in her mind-- strange and disturbing hallucinations.

But every now and then, one of these hallucinations turns out to be real. Cathryn is a woman always caught off-guard, unsure if the person that just walked into the room is real or not. And the audience is trapped in her point of view, also unsure. This effect left me deeply unsettled and I remained that way until the end. And what an ending! To Cathryn, what unfolds is utterly inexplicable. How did she arrive at this place? It is not only horrific but, so illogical and unfathomable that it breeds a feeling of genuine alarm. Do not expect blood. Expect to silently plead and beg whichever entity you pray to -- for good mental health. Because –all horror-movie-coolness aside- real crazy people never look like they're having much fun. 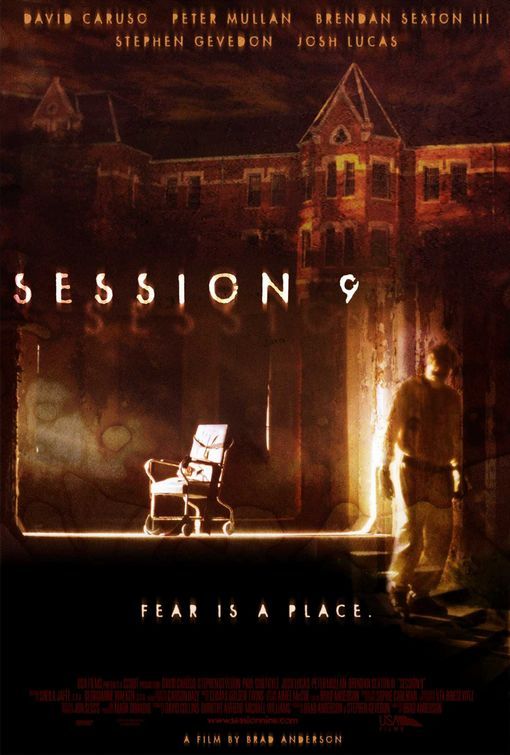 From the outside, Session 9 appears to be nothing more than your standard indie horror flick. A handful of asbestos-removal workers are dispatched to an abandoned mental hospital on the outskirts of town. It's a project that should take a month to complete but Gordon (the great Irish actor Peter Mullan) agrees to knock out the job in only a week, much to the chagrin of his employees (Josh Lucas, Brendan Sexton III, Stephen Gevedon and legendary ginger, David Caruso). But despite some complaining, they begrudgingly get down to work, visions of paychecks dancing in their heads.

Any further details would only spoil the ensuing fun. Writer/ director Brad Anderson (The Machinist, Transsiberian) pulls-off what I can only describe as slight of hand. We notice that as we go along, certain scenes abruptly end. Anderson is keeping information from us. In literature, the unreliable narrator is a well know trope. Here, we have no narrator but, five possibly unreliable characters. Who is telling the truth? And who is lying? Anderson doesn't give the audience an easy vantage point to watch from. We're never sure who we can trust, until it is too late.

The setting –the mental hospital- is a main character in itself. Whether or not they simply found this on location or if Production Designer Sophie Carlhian actually created the interiors from scratch, I do not know. Either way, the effect on-screen is masterfully presented for such a low-budget film. It totally lives up to the poster tagline: "Fear is a place."

Much of the charms of Session 9 lie in the details. Just watch the movie. I'm trying desperately to avoid spoilers so, I'll leave you here: If you still do not believe that this is a very good film then, here is the irrefutable proof: David Caruso is really good in this movie. That –my friends- is no easy accomplishment. 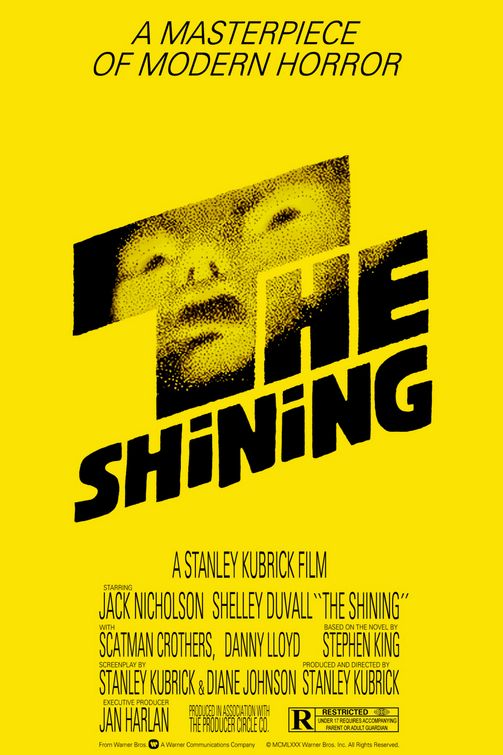 "Larry, just between you and me-- we got a very serious problem with the people taking care of the place. They turned out to be completely unreliable assholes." – Dick Halloran (Scatman Crothers)

Obviously, The Shining is number one. Sorry for my predictability but, in many ways it is the ultimate horror movie.

Adapted from Stephen King's masterpiece novel, the story (as if you don't already know) follows the Torrance family, Papa Jack (Jack Nicholson), Mama Wendy (Shelly Duvall) and Li'l Danny as they head up into the mountains to spend the next few months at the Overlook Hotel, where Jack will be the winter caretaker. The Overlook has its fair share of skeletons in the closet as, a few winters earlier; a previous caretaker had gone berserk and brutally murdered his entire family and then himself. But, Jack isn't worried.

A key is the use of Wendy Carlos' music (who Kubrick previously collaborated with on A Clockwork Orange). The score fills you with a pervasive sense of dread from frame one. In King's novel, Jack is a relatively normal guy, albeit with a nasty drinking problem. But, in the film, he appears to be totally insane from that early car ride up the mountain. The music supports this. That first exposure to the hotel was the conception of something horrible inside Jack. Later, when he finally gets a glass of ghost-bourbon, he gives birth, the violence and evil spewing out into the world.

One of the picture's best twists comes when Dick Hallorann finally arrives at the hotel in the Snow-Cat. Danny –of course- summoned him nearly forty minutes earlier in the film, and we have continuously cut back to Hallorann, showing his long and painstaking journey from Florida to Colorado. All this build-up must be prelude for Hallorann to use his Shining powers, right? He will stop Jack and, save Wendy and Danny, right? Nope. Instead, when Hallorann does make it inside, he immediately receives an axe in the chest courtesy of Jack.

Kubrick is toying with the audience, using our preconceived notions of how the story might play out, based on what we are shown -- and then pulls the rug out from under us. King has stated his distaste for Kubrick's adaptation many times over the years but, the facts cannot be debated: It still holds up to this very day. I love Stephen King and I do realize that without him, the story wouldn't exist at all. But, the man is just plain wrong about the Kubrick movie. The Shining is the greatest horror film ever made.