If you've been following our Twitter updates on the left side of our home page (or directly at twitter.com/showbizmonkeys), then you know what Day 2 of the Winnipeg Folk Festival was like -- the music was great, the atmosphere was awesome, and the weather was all over the place. So basically, it was your average day at Folk Fest!

The evening started with local singer Alana Levandoski, followed by a 'Tweener' set (the shorter sets in between the featured performers) by another local Winnipeg singer/songwriter, Don Amero. Vancouver's interesting and eclectic trio Pacifika followed Amero with a great set that I happened to enjoy from a distance while eating a beauty of a smokie from Skinners. We were hanging out in the distance under a tent because of the looming storm clouds coming in from the west. But as the rain didn't seem to want to fall yet, we headed towards the main stage where the throngs were watching Big Dave McLean blues it up like few others can. 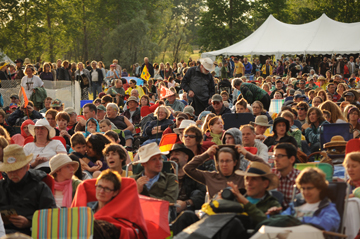 Then the wind came, each giant gust causing various sounds to echo out from the crowd. A flurry of napkins from one of the concessions shot in the air, and I finally felt like I wasn't just at a music festival, but at the Winnipeg Folk Festival. The weather has always been one of the many amusing and sometimes crazy characters that makes this festival unique, and shortly after the big winds came through, the rain came down -- all this, just as Tennessee's The Punch Brothers (featuring former Nickel Creek mandolin player Chris Thile) were hitting the stage. As the rain was coming down, the hot sun peered out from the west, and following a short sun shower, all that was left was some muddy fields and a rainbow over the stage. 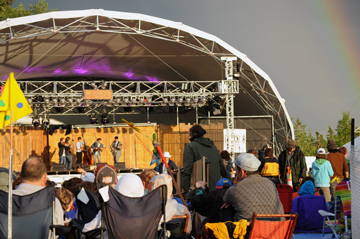 Having not heard The Punch Brothers prior to the festival, they blew me away! Great stuff from Chris and his band of merry bluegrass players. 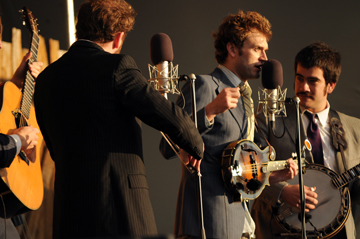 But after all the rain and the mud, I had to make some wardrobe changes, though from a distance I did hear most of King Sunny Adé and His African Beats, who had people up and dancing. A solo performance by Vance Gilbert, which included some funny comments in between songs, lead up to the night's headliner just as the skies were darkening.

Xavier Rudd first made his mark around these parts at the 2004 Winnipeg Folk Festival. Coming off a top 20 record in his native Australia, he was a relative unknown in North America. But festival audiences fell in love with him, and he was invited back for the 2005 Fest to much delight. The multi-instrumentalist (playing everything from didgeridoos to harmonicas to slide guitars and more) who also has a pretty amazing voice has since toured with Ani DiFranco, played on Jimmy Kimmel Live, and been named PETA's 2007 "World's Sexiest Vegetarian Celebrity". But the crowd at the Winnipeg Folk Festival were just happy he was back to play for them. 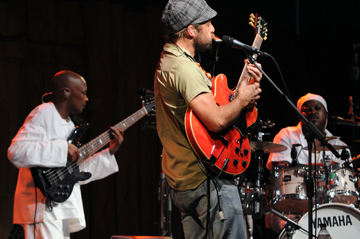 Playing until after midnight, Rudd put on a clinic on multiple instruments, but it was the booming sounds of the didgeridoo that filled the night sky. Hauntingly beautiful, they were present at multiple times throughout the show, but Rudd also knew how to get the crowd moving to some traditional and modern beats. In fact, as many of the tarp-users started to call it a night, the section normally occupied by people quietly sitting and enjoying the music was taken over by dancers. By the time Xavier Rudd left the stage, nearly everyone was on their feet and Day 2 of the Fest had ended on a high note.