I know we haven't really posted about Scrubs since I wrote one recap back in October 2007 and then I got behind on them (with Scrubs recaps never to return), but for those that are unaware, the show airs its last episode of the season (and possibly ever) tonight on ABC at 8/7c. While negotiations are still underway for Scrubs to possibly return to ABC's airwaves next season with a slightly revamped cast, tonight's hour-long finale will be the end of the road for series star Zach Braff (who plays Dr. John 'J.D.' Dorian) and the show's creator and executive producer, Bill Lawrence.

After years of NBC treating the show like it was a Raggedy Ann doll, throwing it from one time slot to another only to refuse to let them film a proper ending last spring and instead airing an out-of-order episode as the so-called finale, ABC (whose parent company ABC Studios produces the show) picked up Scrubs this season for an 18-episode "final run". With that history, it's a miracle the show has managed to produce 8 seasons of hilarious and zany comedy mixed with genuinely poignant and moving drama. It's kept a very loyal core of fans through its run, though, and while some Scrubs fans thought the show got a little too goofy for its own good for a couple seasons, most agree that this last year especially has been up to the standards set by the first three seasons.

The best Scrubs episodes were those that perfectly balanced the comedy of these crazy characters with the drama of working in a hospital and dealing with death at every corner. The first season's "My Old Lady", the third season's "My Screwup", and the fifth season's "My Lunch" were probably the best of these, but there were so many more along the way. There were also the wonderful "extra special" episodes that bent the basic structure of the show and instead followed a theme, like "My Life in Four Cameras" (mostly shot like a traditional sitcom), "My Way Home" (homage to The Wizard of Oz), "My Musical" (the musical episode), and last season's "My Princess" (fairy tale-themed).

Though lots of shows (especially NBC comedies, it seems) employ plenty of guest stars, Scrubs always seemed to find a way to seemlessly integrate their characters into the fabric of the show: Tom Cavanagh making his annual appearance as J.D.'s brother, Dan; Amy Smart, Mandy Moore, Keri Russell, and a somehow tolerable Tara Reid as failed love interests for J.D.; Michael J. Fox, Elizabeth Banks, Heather Locklear, Courtney Cox, and Dave Foley as various doctors who spent a few episodes at Sacred Heart (some of who were also love interests for J.D.); and of course Brendan Fraser as Jordan's brother Ben. 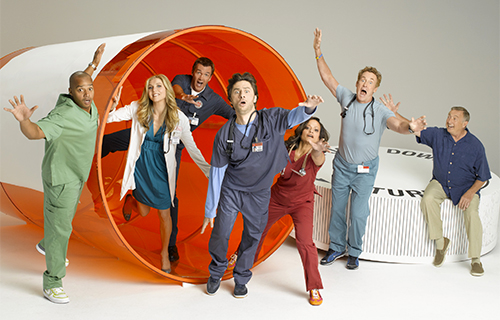 But it was the regular cast, both the main characters and the recurring ones, that truly made this a memorable 8 seasons. J.D. (Braff), Turk (Donald Faison), Elliot (Sarah Chalke), Carla (Judy Reyes), Dr. Cox (John C. McGinley), Dr. Kelso (Ken Jenkins), and the Janitor (Neil Flynn) were in my opinion the funniest and most comedically diverse cast in sitcom history. And the supporting characters, most notably Jordan (Christa Miller), Ted (Sam Lloyd), The Todd (Robert Maschio), Nurse Roberts (Aloma Wright), and Doug (Johnny Kastl), were all fleshed out more than many sitcoms do for their main stars.

After last night's penultimate episode, when J.D. let everyone at Sacred Heart know that he was leaving the hospital to take a job much closer to his young son, tonight will see the final farewell to the character once and for all. From the clips I've seen, it looks to be an emotional rollercoaster of an hour, and I'm looking forward to being able to say goodbye to the show that has been my personal favourite for several years, thanks to ABC. Sure, I'll miss J.D.'s crazy fantasy sequences, Dr. Cox's brilliant rants, the Janitor's pure insanity, and the bromance of J.D. and Turk, but it's been a pretty nice ride these last 8 seasons.

Only one question truly remains: will tonight be the night we finally find out the Janitor's real name?

I... totally thought this show had been cancelled years ago.

After watching the finale, I just have one more thing to add... I'm actually kind of angry at NBC for nearly preventing that incredible episode from happening. As far as finales go, it exceeded all expectations, mostly in its understatement rather than its grandeur like you see most of the time. I'm so glad ABC gave the show a chance to wrap things up the right way. Thanks Bill Lawrence and all!