It's finally time for my first article in a continuing series. In this article I'll be showcasing some of the best shows that aren't necessarily part of the mainstream.Some of these shows are juggernauts overseas, and some are just on cable. All of them are faaaantastic!

The first show I will be attempting to convince you to start watching is Top Gear.

Most car buffs already watch this fantastic show, but be assured, it has turned more into a comedy show with the 3 hosts constantly bantering back and forth.There are still a ton of beautiful cars being reviewed, however.Imagine motoring series, but instead of Fords and Hondas, you're watching Ferraris and Bugattis. FUN!

Top Gear originally started way back in 1977, but didn't really take off until its rebirth in 2002. Since then it has blown up across the globe and even produced some mimicked versions of itself: Top Gear Australia, Top Gear: Russia, and Top Gear: United States (kind of).

One of the best things about this show is its hosts.

Becoming more prevalent in recent seasons, Top Gear is known for its zany challenges. Some of them feature each host given a small amount of money to buy themselves a car in order to win various challenges. These challenges usually have an underlying purpose (finding the best car for reliability or fuel economy, but they're just plain fun to watch).

Usually once a season however, there's a Grand Challenge. Some of these have involved racing a Bugatti Veyron against an airplane, building an amphibious car, a tour of Vietnam on motorcycles (and a scooter), and a drive through the Amazon rainforest! 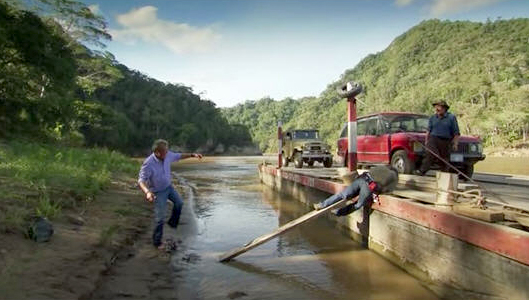 Now what kind of car show would it be without the fastest cars being pitted against each other? Some of these fastest cars you've heard of, but all of them are street legal, and are available to buy (you know, if you're filthy rich). Some highlights include a Pagani Zonda C12, a Koenigsegg CCX, and Ascari A10, and the current leader, the Caparo T1. Honestly, the Caparo T1 is street legal. I know how much it looks like an F-1 car.

All of these cars are driven by "The Stig", an extremely talented driver who is likely a retired F-1 racer. He's just too good to not be one. The funny catch is that he never speaks, and you never see his face. We'll never know!

Other fun segments include a new celebrity each week coming down for an interview with Jeremy, and then driving around the track inside a crap car. A few of the guests have been Simon Cowell, Gordon Ramsay, Eric Bana, Hugh Grant, Ewan McGregor, Jay Leno, Mark Wahlberg, and about 50 others.

Top Gear airs on the BBC in Europe, and makes its way over to BBC America and BBC Canada once the season has completed.If you're able to watch this show, I highly recommend it!

I don't like cars very much but I did watch the episode about going through the Amazon... pretty neat!