In exchange for the safe return of a kidnapped Princess, the British PM must decide if he will submit to a sickening form of public humiliation... A loner living in a corporate dystopia makes a violent attempt to free himself from a life of plodding servitude... A loving relationship is torn apart after a trendy new piece of technology allows husband and wife to explore the darkest recesses of each others memories...

In Charlie Brooker's groundbreaking Channel 4 program Black Mirror, these tales unfold with horrifying naturalism. Like a Hot Shots fanboy (you'll find out about that soon enough) I was glued to my screen.

At first we laugh and shake our heads. We mutter: "That could never happen." But as these stories unfold, fragments of our lives and culture begins to seep in, reminding us that not only could this happen but if it did, this is exactly how it would go down. 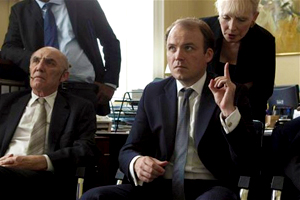 This brilliant (and dare I say, important) fantasy/sci-fi/horror/comedy mash-up, a very dark genre blend, is nearly indescribable. The show's first series (of hopefully many) is comprised of three episodes, focusing on a different tale each week. The easiest comparison would be The Twilight Zone, which never plumbed the emotional depths that Brooker does here. In fact, neither did Huxley's "Brave New World". Instead of focusing on the hard sci-fi details, these stories are really about the characters. And Brooker has a remarkable ability to find sentiment in some very unlikely places. In the first episode ("The National Anthem"), the Prime Minister's wife's understandable opposition to her husband's humiliation (the specifics of which I would never spoil) and her resulting depression are played totally deadpan, as they should. What starts out humorously eventually makes the dramatic and unexpected shift into genuine poignancy.

Another way in which Black Mirror succeeds is its ideas. The writing is a breath of fresh air after J.J. Abrams' hit, Lost, which in the end collapsed into eye-rolling mysticism held together by cheap, unconvincing CGI. Unlike That Smoke Monster Show, the premises may seem outlandish but the performances never reflect this. For the characters, these bizarre happenings are very much real. If there is a joke, the actors do not seem to be in on it. Reminiscent of British director Mick Jackson's early film Threads, the remarkably disturbing docudrama about an impending nuclear holocaust, I found myself looking at my own world differently after Black Mirror. 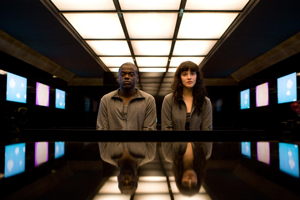 Episode two (my personal favorite), titled "15 Million Merits", could have been a theatrical feature film, save for the fact it comes in at less than an hour. It takes place in a satirical dystopia, and follows a drone named Bing who, like many others, rides a cycle that powers his surrounding prison-like world in exchange for merits -- his society's currency. The only hope of escape comes via a game show (much like American Idol) called Hot Shots, in which your talent (whether it's singing, dancing or, yes, having sex) can be your ticket off the cycle. Why not take a chance on the game show? What's the worst that could happen? What Brooker has in store for Bing is far worse than any violent image Alexandre Aja could cull from his imagination. I suddenly found myself feeling the same way about pop-up ads as I did about sharks after seeing Jaws as a small child.

That episode in particular chooses to study human folly instead of the classic sci-fi trope, a brooding fear of technology. In this fictional world of "15 Million Merits", fame is more important than skill. I mean, who gives a damn what you're famous for? The most important thing is your notoriety. Talent comes a distant second. Now that doesn't sound like the world you live in, does it? (Sarcasm) Neil Armstrong is a famous ASTRONAUT. Stephen Hawking is a famous PHYSICIST. Ted Bundy is a famous SERIAL KILLER. Get my drift? 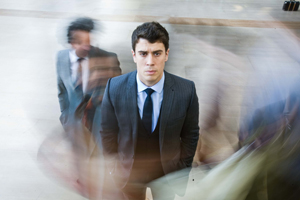 The third episode ("The Entire History of You") may be the most disturbing in its realism. Have you ever had an argument with your significant other about something utterly banal and pointless -- an argument that could have easily been avoided? Well, imagine that you have access to video of every single moment of your life right at your fingertips. Your partner: "Oh, you never said that, huh? Well, watch this!" Cut to YOU saying something awful. The massive, earth shaking he said, she said fights that would result from this could bear potentially fatal consequences. This episode's bleakness may turn off some viewers, but if so, it will be because they recognize something of themselves in that tale. But I feel that Brooker's message is not one of condemnation, but one of warning.

Black Mirror (Channel 4, UK) forewarns us that it will not merely be technological progress, but our own stubborn human ignorance as well that will lead to our eventual downfall. How can it be possible that modern technology has advanced as far as it has and we're still bickering with each other over pointless nonsense like sex, money or politics? Have we learned nothing, other than how to use our smart phones? To quote a rather famous sci-fi character: "It can only be attributable to human error."