I inherited my reserved demeanour from my father. He understood it when I was young and didn't push me into doing things I felt uncomfortable doing. That's all fine and dandy when you're young but when you get older it's not healthy. After relying on others to do things for me, I never really learned how to do things for myself. When I was I kid, there was always someone there to help. But when I became an adult, it got harder and harder. Rather than ask for help, I just avoided things all together. It was the only way I knew how to cope.

Dear dad, I forgive you. It's not your fault. You were only trying to protect me.

Eventually the shyness I had as a boy developed into full blown social anxiety as an adult. It ruined relationships, and made my professional life stressful and difficult.

I've gotten the help I needed to deal with my issues and have been living happier and healthier ever since. I've accomplished more in the past year than I have in the last ten. And it all started with acceptance. Acknowledging I had a problem was my first step in getting better.

And so arrives this week's episode of Glee.

After a lacklustre episode last week, Glee returns with a classic episode of self acceptance. I know it's yet another reiteration of the ongoing theme of this series, but it's a theme I love and precisely why I love Glee. Yes, this episode is just preaching to the qoir known as The Gleeks, but those who disagree with me will just have to accept me for being "Born This Way".

Rachel considers getting a nose job because of Finn's break dancing. But when she tells the class, she's met with little support, except for Santana, who goes on a rant about everyone's physical abnormalities. The admirable Will Schuester wants to help inspire the kids because he believes the thing you feel most insecure about is what makes you most interesting. That may be true in the real world, but in high school, that kind of information is used as ammo and can "crush your spirit", as Mercede so eloquently puts it.

Determined to prove them wrong Mr. Shuester comes up with an assignment for them: to sing about what makes them most insecure but can't do anything about because they were born that way. Then they will celebrate their insecurities with a group performance of the Lady Gaga acceptance anthem.

Meanwhile the race for Prom Queen is heating up as Lauren and Santana have thrown their hats (or berets) into the mix against Quinn. And neither one of them wants to play nice. Santana concocts a devilish plan that involves posing as Karofsky's girlfriend and getting him to apologize to Kurt in an attempt to get Kurt to return to MacKinley, thus, hopefully boosting Santana's popularity. Lauren takes a more traditional approach: digging up dirt on Quinn. Apparently, the practically perfect Quinderella was once just a plain step sister named Lucy Caboosey before she transferred to MacKinley. Unfortunately, for Lauren, her plan backfires and Quinn's popularity skyrockets because everyone can relate better to a swan that was once an ugly duckling. Even Lauren, feeling guilty about what she did, apologizes and finds a newfound respect for Lucy Caboosey.

Kurt returns to MacKinley after Karofsky spills the beans to him about his arrangement with Santana. Karaofsky still has some feelings inside he needs to figure out and agrees to get himself educated. Santana, meanwhile, has some demons of her own that need to be exercised as she's still not comfortable going public with her being "Lebanese". The Kurt-Karofsky-Santana- Brittany storylines are far from over.

As the big day comes to perform some Gaga, Rachel opts out of the surgery while Emma decides to seek professional help about her OCD. And everyone expresses their insecurities by writing it on their shirt.

I loved the "Born This Way" performance, but I couldn't help but roll my eyes at some of the selections on people's shirts. Are these really insecurities that they can't do anything about?

I decided to not over analyze it too much and accept the performance less literally, but rather more symbolic of the overlying theme of the episode. Besides, this episode is not really about big noses, or acne, or how overweight you used to be.

Sometimes a problem you have is so ingrained for so long that it seems like "that's the way you are" and "there's nothing you can do." Unfortunately people don't realize it's precisely that type of thinking that inhibits people from change and paralyzes them from getting on with their life. Anybody can change. Acceptance is the first step.

I hope Emma can overcome her OCD as well as I'm coping with my social anxiety.

As much as I loved the plethora of Santana's howlers this week, there's only one line that mattered to me:

"Be the change you want to be in the world." – Tina

Do you even have to ask? 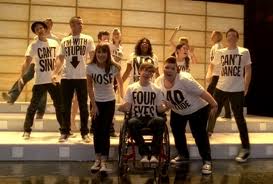 Next week I will put an end to all the "RUMORS" at McKinley High!

It was funny episode of the show.