"Sometimes I think you treat my son like the woman in the relationship."

"The Last Walt," is named after the elderly neighbour that Luke is friends with, who just passed away. Claire and Phil found about about the death, and had to break it to their son. 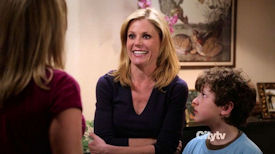 This became the main story in this episode, which ended up revolving around Claire's smile of death. Because Claire is emotionally repressed, oriented towards achievement, and unable to express grief properly, she ended up smiling when talking about death. This is also the same woman that thought her son, Luke, was not processing his grief properly.

Too bad she could not smile like this, when she was campaigning last episode. 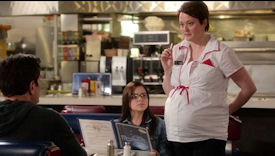 While Claire was smiling at the wrong people at the wrong time, her husband, Phil, did not want to end up having an estranged relationship with his daughter, like Walt did. As an attempt to prevent this, he took his middle daughter, Alex, out to make some memorable times. In this case, being at the scene of when an overdue pregnant diner waitress would give them the opportunity to deliver a baby. 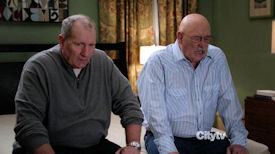 Meanwhile, Jay faked illness to get out of coming over for a dinner that would have Cameron's father present. But since Mitch is all too aware of his father's hang-ups, he saw right through the lie, so Jay ended up having to come over. After dinner, the tensions arose as Merle gave a set of men's and women's watch to Cameron and Mitch. Finally, Jay and Merle talked in old man style, about accepting the sexual orientations of their sons, which gave the two of them something in common. 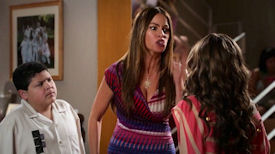 Lastly, Haley manipulated both her mother, and Gloria into allowing her to throw a party at Jay and Gloria's home. Haley, thinking she was smart, thought she could tell her mother that her "uncle" was the chaperone, but she was really getting Manny to fill in the role. Haley also told Gloria that the chaperone would be approved by her parents. When Gloria came home to the deception, she gave it to both her son and to Haley. But she treated them differently. Gloria made Manny give up his uptight chaperone duties to enjoy the party, which Manny did not want. By doing this, Haley felt it would ruin the party, to which Gloria responded, "Two birds with one bullet."