Silly me, I thought this week's episode was the season finale. Alas, next week will be the infamous "Graduation" episode that Gleeks around the world have been waiting for... or regretfully hoping would never arrive.

But before the New Directions get their diplomas, they have a few things to figure out first, like how are they going to win that elusive National Show Choir Championship?

All I can say is it's a good thing the students of McKinley didn't graduate this week because then I wouldn't have been able to sit through two of the best episodes of the season!

Will and Sue are combining their forces to help New Directions conquer Nationals in Chicago. And they need the help because Vocal Adrenaline has got an MVP on their roster: Unique. Yes the same Unique who Mercedes and Kurt helped discover himself/herself has blossomed into a big time showstopper allowing Vocal Adrenaline to emerge as the favourites for Nationals.

Sue comes up with some gimmicks of her own to combat VA's Uniqueness: Props and Drag. Unfortunately they don't work out so well. The only dude who'll don a dress is Puck and the welding props for Sue's "Flashdance" vision is more of a hazard than a benefit.

So the New Directions decide to go with a traditional approach albeit a flawlessly executed one. There is another bump in the road, however. Tina is sick of being in the background and desperately wants to shine. Despite having some choice words directed at Rachel Berry and storming out of class, she agrees to fulfill her duty as costume designer. Unfortunately all that anger prevents her from watching where she walks as she trips into a water fountain at the mall and hits her head putting her into a "Freaky Friday-esque" dream state. Tina's Bizzaro World was short lived but quite possibly the best bit all season long. You see, in her dream, Tina gets to be Rachel and Rachel gets to be Tina. But that's only the beginning! Finn and Puck suddenly look oh so cute as Blaine and Kurt, Blaine goes all Travis Bickle as Puck, Finn gets all boring to be Finn, Santana wheels around as Artie, Sue adds some Lubriderm to her hair and Will dons a track suit... you get the idea!

And of course, sooner or later Tina learns that by being Rachel she become a better Tina. We've seen it a million times before but boy was it a joy to watch everyone imitate each other's mannerisms. And that extra eyeliner on Rachel gives her a sexy dark side!

Anyways, Tina does realize that she was being a little selfish despite having a strong argument for always being pushed aside. Since she knows she'll be in the spotlight next year when she's a senior, Tina puts the team first and helps Rachel get a meeting with Carmen Tibideaux to plead for yet another chance at NYADA. Carmen is not that impressed, but Rachel states her case, "Didn't you audition for Juliard 4 times?" So fingers are crossed that she accepts the invite to check Rachel and The New Directions out at Nationals.

In other news, Coach Bieste's secret is out so Mercedes, Santana, and Brittany, confront her about staying with that nasty wife beater Cooter. Even after being called out, Coach Bieste still doesn't have the strength to leave Cooter. That is until she breaks up a fight with Puck and Rick the Stick.

Puck's feeling pretty worthless about flunking out of school and having no direction or family to support him. In a sequence of great scenes, first Coach Bieste and Puck bond over their hurt. "We're both bad-asses. Nobody thinks anything hurts. But it does." She tells him. Then Bieste vows to not feel worthless anymore and walks out on Cooter in a potent scene.

"Who's gonna love you now?" Cooter asks Bieste. "Me." She replies.

Way to go Bieste! One simple word, one measly syllable and her whole life is changed in a heartbeat.

Finally, Puck and Bieste express their hurt in a duet of Taylor Swift's "Mean". And believe it or not, it works. The song is given new resonance from the context of this scene, as opposed to Taylor Swift's whiny jilted-lover image. 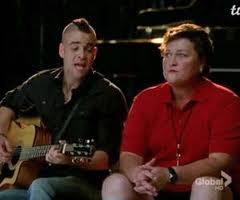 So Tina, Puck, and Bieste are all in better mindsets and all are boarding the bus to Chicago and on their way to Nationals. What a feeling it is!

Mercedes has a fever, and it's not even Saturday Night! But don't worry, Sue will work her magic on her. Everyone is fighting, but apparently it's a good thing. It means they really want to win. So after a brief encounter between Rachel and Jesse St. James (who's taking credit for Unique's success), Finn decides to give the team pep talk – the young grasshopper has learned the way of his Master Schue, and surprise! Mercedes is ready to go!

The new and improved Troubletones complete with room for Tina and a dancing Quinn (that's right!), heat up the stage with Gaga's "Edge of Glory". Then Rachel has her moment in the sun with Celine Dion's Meatloafesque "It's All Coming Back to Me Now". Don't worry Rachel, I don' think that sun is going to set yet, because who's that arriving late? It's Carmen Tibideaux!

Finally, the whole gang comes out to perform a very spirited rendition of the real Meatloaf's "Paradise By The Dashboard Light". Those New Directions are "Gonna Go All The Way Tonight" indeed! You can tell everyone is having fun during this performance.

Vocal Adrenaline strikes back with Niki Manaj's "Starship" and The Who's "Pinball Wizard". It's a very polished performance with slick choreography and real pinball machines – damn those props! It's going to be a close call for the judges.

Since Lindsay Lohan and Perez Hilton split their votes on New Directions and Vocal Adrenaline, respectively, it's up to Lloyd from Entourage to come up with the deciding vote.

Three times a charm! Well, three seasons a charm is more like it. The New Directions are coming back to McKinley as the champs and boy are they in for a surprise. Everyone is actually happy to see them! No longer are they still the laughing stock of the school. It reminded me of the end of Lucas when those jerk football players made pipsqueak Lucas (Corey Haim) an honorary member of the football team and gave him his own jacket. I'm getting choked up writing this right now. I love it when bullies become allies! Although there was no slow clap to welcome the Glee Club back to McKinley, there was a pair of confetti slushies courtesy of those hockey playing (former) bullies. Awwe.

Everyone loves a winner. Even Jesse St. James – immediately after the New Directions' win, he approached Carmen and recommended Rachel with his personal stamp of approval. See you in New York Jesse?

But before the curtain comes down on this double episode week of Glee, there was one more award to be handed out. And that was to Will Schuester for Teacher of the Year. And here to present and serenade you are the very students that made you this great teacher: The New Directions! "We Are The Champions" is such a cliché, but why karp? It's their moment.

Congratulations Will and the New Directions. But I can't help but wonder... could this be the last performance from this group? 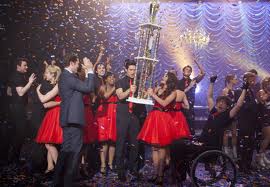