Like any difficult goodbye, the final episode of Glee's Season 3, seemed like there wasn't enough time for everything to be said. Before we knew it everyone was in their cap and gown and tears were flowing. Emotions were running so high in this episode it almost felt like a series ender! I almost forgot that these storylines will be caught up with in a few months. All the tears and farewell speeches just seemed so final. Anyways, here are the highlights:

The episode was flashback and monologue heavy and the first to get their turn was Will Schuester. Walking into class this week, Will is reminded of the very first time he walked in on this band of Glee Club misfits, and he's already a little choked up. This week's assignment is simple: "Goodbye". Underclassmen are to say goodbye in song to the Seniors, while the Seniors will say goodbye to everyone else. 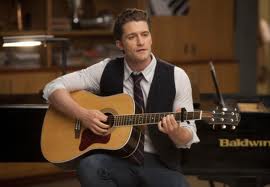 The first to pay his respects is of course, Will himself, with a touching acoustic version of Rod Stewart's "Forever Young". Next up is Kurt, who can walk tall through the halls of McKinley knowing that he has influenced a generation of fashionados. After receiving the best (or most awkward) gift from his pops – a "Single Ladies" serenade, Kurt pays his respects to the class with Madonna's "I'll Remember" – good choice Kurt!

Okay, now for some quick hits to catch everyone up: Mercedes snagged a deal as a back-up singer on an indie label and is off to UCLA, Mike got that scholarship to the dance school in Chicago he fought so hard to get, Roz and a still preggo Sue decide to join forces to take down the useless Principal Figgins –whatever that means! Guess we'll find out next season. Brittany is apparently being held back a year on account of her 0.0 GPA and will become a two term Senior President. We all assumed Brittany's grades weren't up to par, but no one really thought she would flunk. A bit of a surprise, I'd have to say.

Santana realizes she doesn't want to go to Kentucky for that Cheerleading scholarship and tells her mother (Gloria Estefan) she really wants to go to New York. After some second thoughts, Santana's mom decides not to hold back her daughter's dreams and encourages her to go to the Big Apple, along with a crapload of cash to boot!

Quinn is feeling all great about herself again with her going to Harvard and being the "real" Prom Queen, so she decides to give back. After making peace with Sue, she helps Puck cram for his Geography test with her own special methods – a kiss. Boy if a hottie like Quinn dangled sex in front of me all throughout high school I would have gotten straight A's. I don't know exactly what Quinn's motives are: she's got a fresh start in a new city and a great Ivy League School. Why would she want the baggage of Puck back into her life? Pen pals for next season perhaps? Regardless, the self esteem boost was enough for Puck to get a C- on the test and celebrate his "Glory Days" at graduation with everyone else.

The convocation was fun. No Vitamin C song, just Springsteen. High fives and smiles all around but small potatoes to the events that would happen next.

Okay, here's the news you've all been waiting for: Kurt, Finn, and Rachel decided to open their (hopefully) acceptance letters all together. So here the three of them were in the music room where all their dreams were conceived. Finn goes first. The look of despair, "I didn't get in." I feel bad for the guy, but seriously, did anyone really believe Finn was going to make it as an actor? Remember he just came up with the idea a month ago after watching Saturday Night Fever(!). Anyways, Kurt goes next, and then the real miscarriage of justice takes place: Kurt doesn't get in! Shock on Kurt's face and mine alike. What the hell Carmen Tibideaux!?! You had such high praise for his audition!

Now Rachel. Would all three of them actually not get in? I guess Carmen really enjoyed the context of the live audience at Nationals (or Jesse St. James's endorsement) because That Girl is in! Rachel Berry is off to New York Cit-ay!

Great reactions shots from Kurt and Finn. The "I should be happy for you but because of my crappy misfortune I'm kind of jealous" faces were priceless.

Well apparently the Type A personality Rachel, is still just a romantic deep down inside because she's willing to defer her enrollment for a year so that Finn and Kurt can re-apply next year. In the meantime Fichel can get married.

Eyes roll... pu-leese! That's really unfortunate, I thought to myself. It looks like Glee didn't have the balls to end the episode the way it should.

That is until Finn picks Rachel up to take her to their wedding. When they arrive at the train station, Finn drops two bombs on her: first, he tells her that if she doesn't get on that train to New York, she's going to regret it. Maybe not today, maybe not tomorrow but soon, and for the rest of her life! Okay so he didn't say it exactly like that, but he did mention that her dads are waiting for her in New York, and he has to set her free because she can't pass up this opportunity. Bomb #2: he's enlisted in the army to clear his father's name. 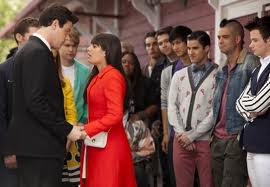 Oh boy was that a great scene. Anyone who's been young and in love knows that some of the toughest and most emotional moments occur in a car. Both of you are not old enough to have your own place and some things just can't be discussed in front of others at school or work. The car is the only place where two people can really be alone. And wow was that a great break-up scene!

It's a tough decision when you're that young. Love or career. You can take KISS member Paul Stanley's advice, "If you want to be successful, you gotta ditch the bitch!" Bob Dylan put it a little more mildly, "To achieve success, one has to suffer through some loneliness."

Either way, it was a great, emotionally tough, and maturely executed scene by all involved. Kudos to the writers for some smart dialogue and the actors for hitting the right notes.

The final shot is that of Rachel going all Mary Tyler Moore and strolling through the streets of Times Square, pink suitcase in one hand, dreams of conquering the world in the other. And perhaps Santana's number on speed dial?

Two wide eyed starlets striving to make their dreams come true on Broadway. I doubt the creators of NBC's Smash will be very happy about Glee's potential Season 4 story arc! 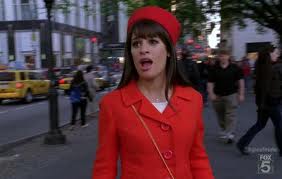