It's Walter White's birthday! What do you get for the cold-hearted sociopath who has everything (including cancer)? Well, chocolate cake is a good start. This week, Rian Johnson (Looper, Brick, The Brothers Bloom) directs one of the most gripping and visually impressive episodes this season.

Ladies and gents, won't you please break bad with me?

As the episode opens, Walt and Junior decide to upgrade their vehicles, much to Skyler's quiet chagrin. 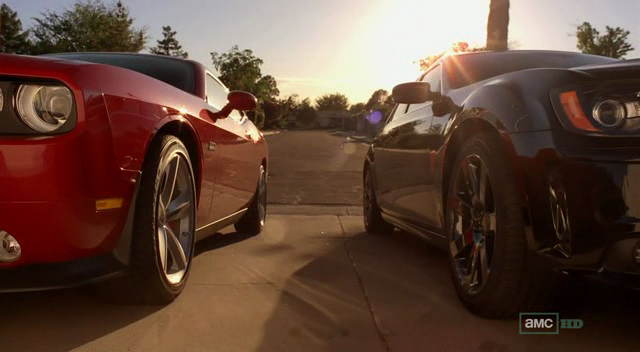 Over at Madrigal HQ, Lydia gets a visit from Hank and the DEA and thus, her contact at the chemical depot joins the rest of Mike's cronies in jail. In short: They need a new pick-up man for the methylamine delivery, to keep that blue gold on the streets.

Skyler's anguish continues as her guys share a lively gear-head conversation over the dinner table. She puts up with it, sadly picking at her food. Later, as they go about their bedtime routines, Skyler suggests a boarding school that Junior could attend for his final year of high school. Walt shrugs this off, turning her down. "But maybe it would be good for Junior... to get out of this environment." 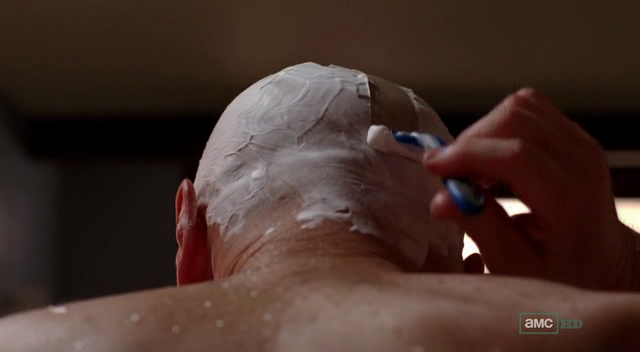 This causes Walt to react. He delivers what I believe he intends to be a very comforting speech. He even brings up his birthday (which is the following day). But the speech feels like Walt's attempt to force emotional normalcy back into the bedroom. He tries in vain, to reassure her-- wishing his statements were her thoughts. But they're not. Skyler does not respond so, Walt rolls over and goes to sleep. But her eyes remain wide open.

Walt's birthday: The fake-normalcy continues as Junior guilt trips his Mother into playfully arranging the bacon on her husband's breakfast plate into a 5 and a 1. She reluctantly obliges.

Back at DEA HQ, Hank goes over the photo wall. Gus. Mike. Lydia. They're all up there. Hank frowns, still not sure if Heisenberg was killed in the lab fire. A superior officer joins them in the room, informing Hank that his old promotion in El Paso is still on the table. Hands are shaken and the deal is done. He takes the promotion –this time- with a smile. 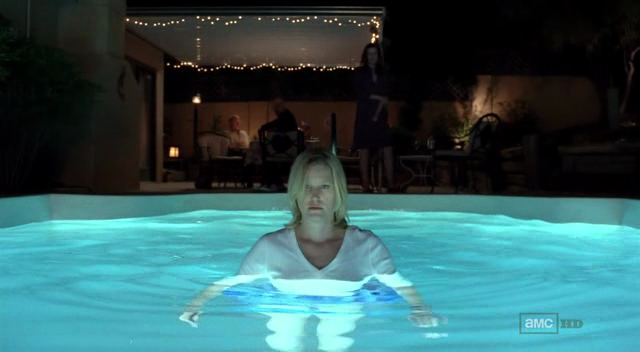 As they finish another day of cooking, Walt asks Jesse to finish up for him, as a massive birthday party is awaiting him at home. Jesse agrees, warmly wishing Mr. White a happy birthday. Walter smiles, pleased.

But at home, there is no big party. Hank and Marie (who are still reeling from the reveal of Skyler's infidelity) will be coming for dinner. And there will be chocolate cake (as requested) but, that is all. Note the utter lifelessness of the 'party' following Walt Jr's departure. The two couples sit in awkward silence, until Walt makes yet another attempt to force normalcy into the situation. He brings up his cancer, hitting below the belt. Lost, Skyler leaves the table, unable to listen to his bulls*** any longer. 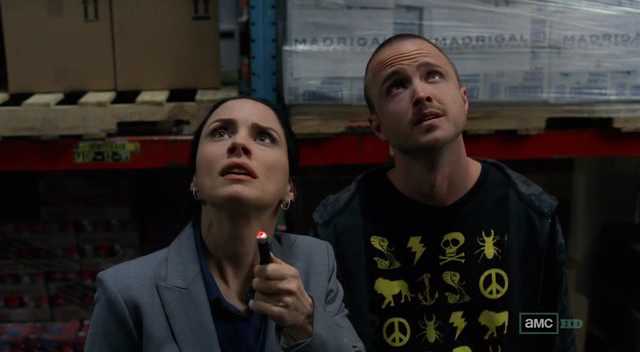 And then, she descends into the pool, fully clothed and sinks to the bottom. Hank and Marie panic but, Walt dives in to save her.

At the chemical depot, Lydia fumbles with the circuit breaker, before finally opening the gate for her new methylamine delivery man: Meet Jesse Pinkman. (Oh dear.) Soon, the frantic Lydia notices a tracking device (DEA?) on the barrel. Uh oh. This could be a big problem.

Back at the house, Walt and Skyler (now alone as Hank and Marie have taken the kids at Skyler's request) have it out. She doesn't want the kids around the meth business anymore. (Seems reasonable) But Walt snaps, putting his foot down. Skyler is powerless against him and she knows it. 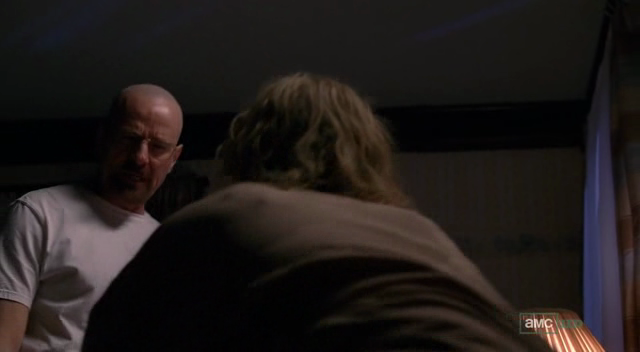 Jesse informs Mike about the tracking device problem and Mike quickly deduces that it was Lydia who planted the device. So, she has to die. But Jesse won't stand for it. He demands a vote. But there will be no vote. Walter has the last word. "Nothing stops this train. Nothing."

Outside, as Walt heads to his car Jesse gives him a belated birthday gift, a wrist-watch. Walt stares at it, deeply moved. He heads home to find Skyler chain-smoking in the living room, her only available form of protest. He shows her the gift, the watch.

"The person who gave me this present wanted me dead too. Not that long ago. He pointed a gun right between my eyes... right here... and he threatened to kill me. But he changed his mind about me, Skyler. And so will you."

Her only response is the crackling sound of the cigarette burning between her fingers.