A dirt bike bounces across the desert terrain, uprooting rocks and skidding down dusty hills. Soon, the driver stops the bike and removes his helmet. We see it is a young, innocent boy-- maybe 10 or 11 years old. He spies something on the ground. It's a large tarantula. He bends and picks up the arachnid, letting it crawl over his hands and arms. Then, he fishes a glass jar from his shirt pocket, placing the spider inside. It tries to crawl out but, the boy hastily twists the lid on top, trapping the creature. A freight train whistles in the distance. He pockets the jar, remounts his bike and, after giving a look out to the horizon, rides away. To where, we do not know. 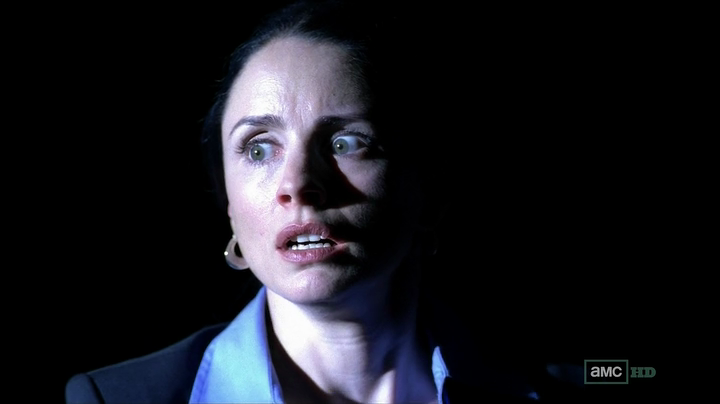 Walt arrives at Hank's new office, to find his brother-in-law reluctantly enjoying his new promotion. Things quickly turn melancholy, as Walt confesses that Skyler no longer loves him. He breaks down weeping, causing Hank to feel suddenly uncomfortable. Such a brazen emotional display is off-putting to a man like Hank and so he excuses himself from the room, under the pretense of getting Walt a coffee. Your wife doesn't love you anymore. Coffee is the obvious band-aid. But with his brother-in-law out of the room, Walt's true intentions are revealed, as he bugs Hank's computer and installs a microphone on a family photo. Hank returns with the aforementioned coffee, none the wiser.

The frantic Lydia finds herself handcuffed to a table in a dark room. Walt, Jesse and Mike stand over her, ready to make judgment on her fate. Will she live or die? They force her to call Hank-- to inquire about the pesky tracking device they found on their methylamine barrel. Hank seems to have no clue. Until, via Walt's mic, we learn that it was another branch of the DEA that placed the device. Mike scowls as Lydia breathes a sigh of relief. She will live, after all. 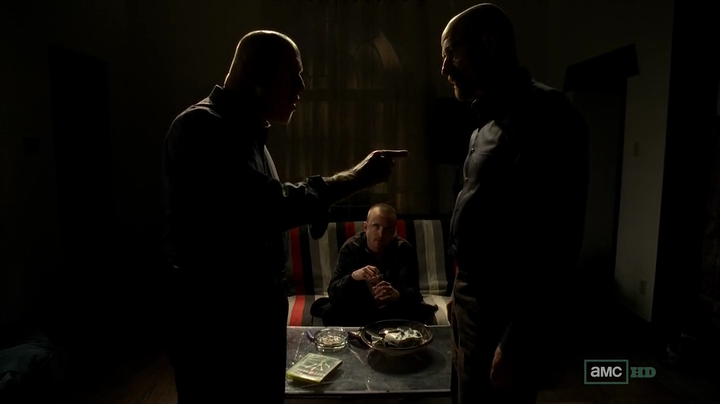 But the chemical warehouse is now off limits. They still need that precious methylamine. Lydia suggests a source: The very freight train that delivers chemicals like methylamine passes through a very special spot on the map. She explains that for a short time, the train will enter what is known as a dark territory. "A dead zone." Here and only here, can they successfully rob the train and not set off Homeland Security sirens. But when the notion of killing two on-duty train workers to eliminate witnesses is balked at, Lydia scoffs. "You guys were gonna kill me! I thought you were professionals!"

This robbery would be a major risk. They all know it. As Walt and Mike argue, the camera falls upon Jesse's face. A light goes on behind his eyes. He interrupts: "What if we could rip off that train and no one ever knows it got robbed?" Eureka.

Back on the home front, Hank happily bounces baby Holly on his knee, as he and Marie discuss the less-than-social Walt Junior, whose anger and resentment continues to build. Junior returns home, locking himself inside his bedroom. He won't speak to Skyler but, when Walt comes home, things change. He opens the door. Walt asks his son to leave, explaining that he and Skyler still need time alone. Junior demands an explanation but, Walt won't give him one. So, Junior goes back to Hank and Marie's, leaving Skyler an emotional captive. 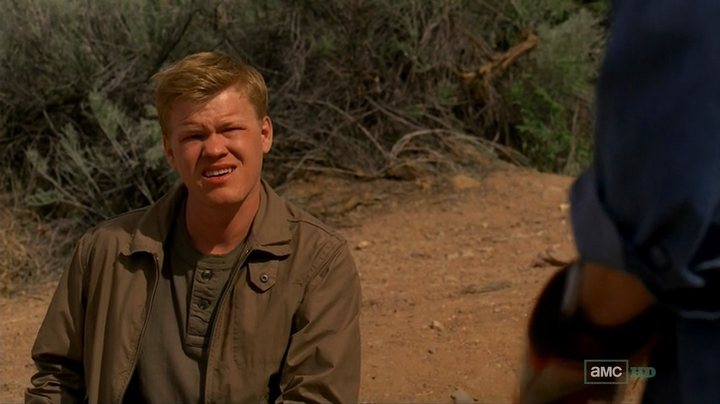 She informs Walt that she will continue to launder the money and keep the secrets but, the kids must remain out of the house. He tries to argue when she notices the dust and sand on his pants. "Out burying bodies?" She passive-aggressively asks.

Jesse's master plan? Replace the methylamine that they steal with water. When the freight weighs in at Long Beach, the weight won't have changed and the water will only dilute the shipment by 4 percent. The perfect crime. Todd (Jesse Plemons) from Vamanos Pests arrives to help with the transfer of the water. Walt warns him from talking about the robbery with anyone. Todd assures Mr. White that he will keep his mouth shut. 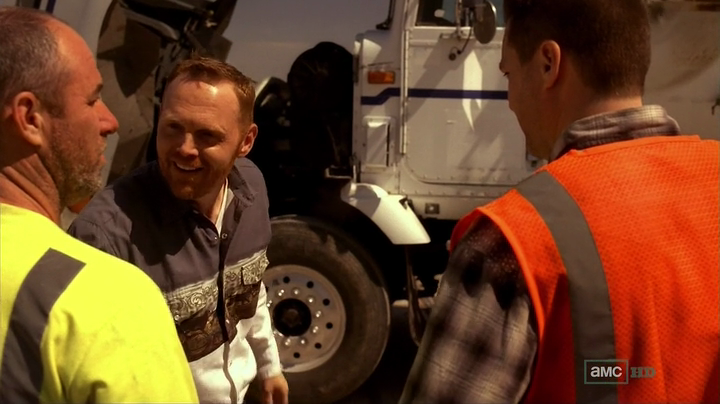 The train robbery is undoubtedly the most suspenseful sequence the show has ever produced. First they must stop the train. The reliable redhead Kudy (the brilliant comic Bill Burr) poses as a harried long-haul driver whose truck has broken down on the track. Once the train is stopped, the transfer of methylamine and water begins. But soon, a friendly man in a massive pick-up materializes to help push Kudy's truck out of the way.

Within moments, the train is rolling down the tracks with water still pumping from the hose. Jesse panics and ducks beneath the train, like Buster Keaton, to avoid being crushed. Todd finally tosses the water hose away and leaps off the freight car. Jesse rolls off the tracks, safe and sound. They did it. The robbery went off without a hitch. All three men jump and cheer-- celebrating too early. They stop, noticing something: A young, innocent boy on a dirt bike. He stares at them from a few feet away. How long has he been standing there? 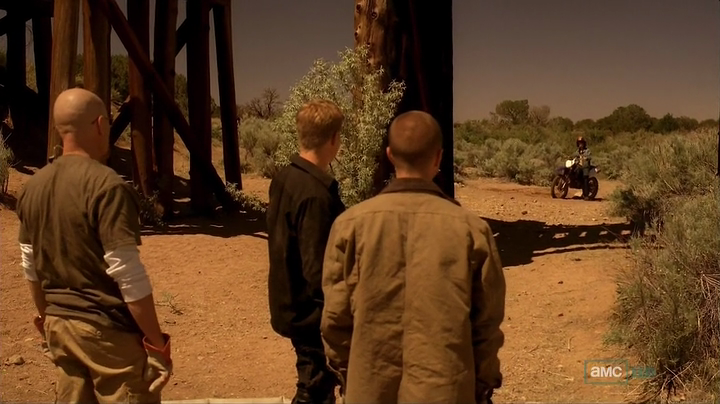 The boy waves at them. Todd waves back... before he pulls out a pistol and shoots the boy in the head. Jesse tries to stop him but, cannot. It's too late.

The boy collapses to the ground, dropping the jar containing the spider-- still unable to escape.