Survivor: Heroes vs. Villains - Slay Everyone, Trust No One (season premiere)

Ten years ago, a little show called Survivor debuted as summer filler on CBS. Called a "reality show", it was a kind of hybrid mix of a game show and documentary, with a bit of Gilligan's Island thrown in. Little did CBS know, the show was an astounding hit, with 52 million people tuning in to watch Richard Hatch be crowned the first sole survivor.

Now, for its 20th go-round, Survivor has brought back some of the most-loved and hated castaways in Heroes vs. Villains (a concept that isn't exactly new to the show, having run an All-Stars season 6 years ago, and a Fans vs. Favorites season pitting post-All-Stars favorites against a group of hardcore fans). For fans of a show like Survivor, the characters are what bring you back for more, and so it's always nice to see some of the most memorable players come back and compete against each other. Plus, for the many people who thought Russell was robbed of a victory due to the jury's hurt feelings in last fall's Survivor: Samoa finale, Heroes vs. Villains serves as a quick second-chance for the villain many of us cheered for. 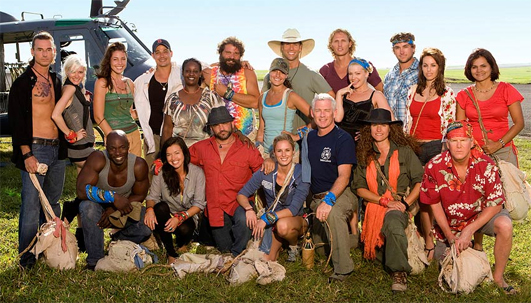 Yes, there are some people missing. The first winner (and many say best player), Richard Hatch, wasn't allowed to leave the country, as Heroes vs. Villains taped right after he got out of prison for tax evasion. I also would've loved to have seen crazy Shane from Panama again, not to mention a couple more people from the earlier seasons (maybe in place of Danielle or Candice). Who would you have liked to have seen on the show? And did they get the teams right? Are there heroes that should be villains or vice versa?

Okay, enough with the introductions. Most of you probably saw the episode and know all this already! So what about the action?

Well, there was lots of action in this one. Right after each castaway was dropped on the beach via helecopter (and a few questions from Jeff), the game started with the first reward challenge. In what was probably the most intense first challenge in Survivor history, two members of each team had to run out to the sand, search for a bag, and bring it back to their team's mat by any means necessary. This challenge was VIOLENT! Stephenie's shoulder was separated (and then put back in place by medical), Rupert's toe broke in 3 places, and Sandra unhooked Sugar's bra to try and get an advantage (it didn't work, and Sugar got the point and then gave Sandra a double middle-finger salute while topless). All those difficulties were worth it, though, since the Heroes won the challenge and a flint.

I definitely think the Heroes APPEARED to be more cohesive and confident as a unit, but especially once the discussions (and confessionals) started taking place at camp, the Heroes were the ones freaking out about who to align with and if they would be targets, while the Villains were just going about their gameplay and seemed much more loose and relaxed. We saw some flirting between Coach and Jerri (what a weird pairing THAT is!), and while they might not have been working as hard as the Heroes around camp, they certainly looked like they were having more fun.

Alliances also started to form on both teams. Russell, having the advantage of nobody knowing anything about his game because Samoa hadn't aired yet when Heroes vs. Villains began, immediately went into the same planning style he used effectively last season, trying to make "final 2" alliances with as many of the women as possible. We saw that he made separate alliances with both Danielle and Parvati, and while Danielle seemed like she actually trusted him, Parvati knew that she'd rather be on the side of the evil mastermind than against him -- after all, she's a bit of a manipulator herself, having won Fans vs. Favorites. The Heroes side was much more confusing, with people pairing up left and right: J.T. and James aligned, then J.T. and Tom, then Tom and Stephenie, then Cirie and Amanda -- at this point, who knows who is really with whom.

There were a couple big "victories" at each camp prior to the Immunity Challenge, as well. Boston Rob, despite protests from Randy and others to not bother wasting the energy, successfully make fire for the Villains without any flint in sight. And some wild chickens managed to find their way near the Heroes camp, where some good teamwork lead to all of them being caught for some much-needed protein supply (the sole rooster didn't make it past Day 3, but seemed to be pretty tasty to the Heroes).

I loved how Rob and a few other Villains (minus the always-a-bit-off Coach) downplayed their camp (and didn't even mention the fire) once they arrived at the Immunity Challenge and heard about how high the spirits were (supposedly) at the Heroes camp. It's a good strategy to let the opponent think you have the upper hand. The Heroes certainly did when they started the challenge by building their boat quickly and collecting their fire out in the water before the Villains had even finished their boat. But perhaps they were a little too cocky (and underestimated the Villains), since once the puzzle portion of the challenge came around, the Heroes floundered and the Villains came from behind to win convincingly. Jeff Probst made a snarky (but accurate) remark about her being "right on cue" when Sugar started crying right after the loss.

There was a bunch of scrambling once the Heroes got back to camp -- more than I had even anticipated. To me, it was clear that Sugar should have been voted off. But there was talk of Amanda, Cirie, Tom, and Stephanie going home at various points -- mostly with the reasoning to get the threats out early -- and I was worried for a few of my faves! But in the end, the weakest member of the team (not to mention one of the four people who messed up on the puzzle) got 9 of the 10 votes at Tribal Council, and Sugar was the first one voted off Heroes vs. Villains.

Was it the right move? Should they have kept the "follower" in the game and gotten rid of a real threat? Will there be hidden immunity idols in Heroes vs. Villains, and if so, has Russell already found one? And will Boston Rob survive the next episode?!?

Prediction: I probably shouldn't do this, because I'll most likely be dead wrong and end up looking like an idiot, but I want to give my predicition for who will win based on the first episode. And that prediction is James. I think he'll finally align himself with the right people this time around, win some individual immunities when they count, and can definitely get the necessary jury votes once down to the final 2 or 3. So that's my pick. Who's yours?

All I know is, I am sooooooo on Team Villians' side. There are way more awesome people on that tribe (read: BOSTON ROB, love love love), and the Heroes are so full of themselves... and the stupid HEROES THEME they play every time they show their camp? Vom.

Also, if Boston Rob doesn't win (which UM it doesn't look like he will from the previews for next week HOLY CRAP), then I'm rooting for Parvati. She cracks me up.

Other acceptable winners: Amanda, Tom, Stephenie. Maybe Russell or Sandra or Jerri. I don't know this Courtney girl as I didn't watch her season (or JT or Tyson or Coach, actually), but she seems kind of funny. She is so wee!

I only got hooked on Survivor after the second or third season. Now I hate missing even one episode! Looks like there's going to be lots of action this time 'round. I'd like to see Stephenie versus Russell in the final. But I could change my mind next week... Hope Boston Rob is okay. I'm very happy that they voted sugar out- how did she end up on the Heroes???

Courtney and Tyson are similar, in that they're both very funny, sarcastic, and aren't afraid to say exactly what they're thinking in confessionals. The difference is, Courtney is a New Yorker -- so it's in her nature, but you know she doesn't actually mean any actual harm by her comments. Tyson just comes off as a big a-hole, and extremely full of himself (at least Courtney knows she's not athletic and probably shouldn't even be there -- even though she totally should be).

I like some of the Villains, but there are more of them I just want gone from this game NOW compared to the Heroes. Sugar (who's already gone) and Cirie are the only people right off the bat I want to see voted out of the Heroes tribe, where as on the Villains side, I could easily go without Jerri, Coach, Tyson, Danielle, and Randy. And while I know she's a great player, there's something about Parvati that makes me just NOT be able to stand her! And I never liked Sandra in Pearl Islands or here. So that just leaves Rob, Russell, and Courtney, I think. Haha.