The Swing Of Things (Trailer )

Supernatural: Our Father, Who Aren't in Heaven

Canadian actor Victor Webster has been quite busy in the dozen years or so he's been in the business. Since breaking out as Brennan Mulwray on the Marvel series Mutant X, Webster has jumped between featured roles on television (Charmed, the new Melrose Place) and smaller roles in films (Must Love Dogs, Surrogates).

Now he finds himself promoting an iconic role he filmed a couple years ago, that of celebrated activist and wheelchair athlete Rick Hansen. The film, Heart of a Dragon, covers Hansen's time in China during his 1985-1987 Man in Motion World Tour (in which Hansen raised $26-million for spinal cord research while travelling across the globe in his wheelchair). The film was written and directed by Michael French, who was on location in China over 20 years ago filming a TV documentary on Hansen and saw first-hand the millions who gave the wheelchair-bound athlete a hero's welcome.

We spoke with Webster last week about what it was like playing someone as well-known, celebrated, and inspirational as Hansen; what he looks for in roles in general; and how he enjoyed filming the movie on location at the Great Wall in China.

We also asked him about working in television, as he's going to be showing up this season for several episodes of the ABC crime dramedy, Castle, which stars fellow Alberta native Nathan Fillion.

Mark McLeod: First off, I'd just like to ask you how you became involved with the Heart of a Dragon project.

Victor Webster: Just through the regular audition process. They called me in to audition and apparently the director, Micheal French, had heard my name from around and someone had said that he should meet me for this part. So I came in and read for it and we just clicked. I thought he had a great story that needed to be told, and I wanted to be a part of it, and he thought I was the right type of person to play the character.

MM: Once you got the part, what sort of research did you do to get ready?

VW: I went to a lot of hospitals for disabled people, read a lot of books, watched a lot of movies on the subject. I was in the chair as much as I could, basically went to a shopping mall and lived in the chair -- just to see people's reactions and feel what it was like to get a sense of living that life. 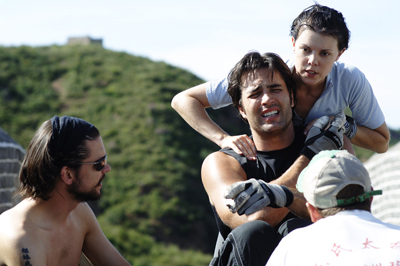 MM: Were you nervous at all about playing such a well-known figure?

VW: Yes I was, actually. I was told that I was given the opportunity to play such a great character that inspired so many people, so I felt that I really needed to do the best that I could to fairly service the story and the theme of never giving up and having intolerable spirit. It's something that people should live with, and that people should go after their dreams. I felt that this character really really lived by that. I think that it's somehow an inspiration to me in my personal life and that it was a great opportunity for me.

MM: Now the film was shot in China. How was that experience?

VW: It was a really interesting experience. It's a completely different culture over there. I had never really heard of any stories of anyone having been over there, and I wasn't really prepared. It's a fast-paced place, and being in the rural parts like the Great Wall, just the energy that was there, the wall felt alive and that it was moving underneath me. It was an inspiration to know the history of it and that it was completely man-made without any machinery, and that people put their heart and soul into building it. It seems to still maintain the energy and vibrations of who built it.

MM: The film was shot a couple years back and has taken awhile to get to the big screen. Do you think audiences are ready to be receptive to this kind of film?

VW: I think this is really a timeless film. I think that any time you can inspire people to go out and live their dreams and their goals, I don't think there's any sort of time limitation on that. I think that especially now, with everything that's going on in the world, we need some hope, a light at the end of the tunnel.

MM: Why should audiences choose this film over some of their other choices at the box office?

VW: You really come out of this film realizing that you can pretty much do anything if you work hard enough for it and put your mind to it. Any goal is achievable. I think people need to have that feeling. It's a great movie with great characters. I mean, you can go see a movie where a bunch of stuff blows up or you can go see this movie and hopefully have it change your life.

MM: What do you look for when you pick a project?

VW: I look for a strong character that has some kind of an arc, a story that is interesting to watch and something that will challenge me and cause me to learn something about myself by doing the project. 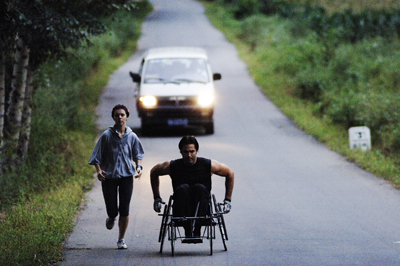 MM: Now, I like to ask everyone I talk to this question: If you had to describe your character in one word, what would it be and why?

VW: That's a really difficult question... The best word to describe the character would be inspiring, I think what he did was such an inspiration to so many people and we'll continue the story of his journey and inspire people for years to come.

MM: You've done a lot of TV and you've done some movies. Do you prefer working in one or the other?

VW: I really do like doing both. I love the beginning, middle, and end of doing a film, and I love television and playing arcs of a specific character and the stability of TV. But there's a lot more freedom in film.

MM: Now you're going to be on Castle. Can you talk about your role at all?

VW: I don't really know much about it. I know that they are bringing me in as Beckett's new boyfriend on the show. I'm not sure what direction they are going to go with it, but I'm sort of the motorcycle-riding bad boy and the opposite of Castle's character, so it's a bit threatening to him. It's a recurring role and I'm doing a handful of episodes.

MM: Well, best of luck with the project and thanks for your time this morning. Sorry about the early hour.

VW: Nah man, it's no problem. I appreciate it. Have a great day!

Heart of a Dragon opens in BC theatres Friday, October 29th.