Silence. The usual suspects have gathered at the mechanic shop. From beneath a large pile of dirt on the back of a truck -- they drag out the dead boy's dirt bike. They dismantle the bike –taking it apart piece by piece- so that it can be dissolved in acid. Obviously, the boy is also concealed beneath that dirt. Creator Vince Gilligan tastefully spares the audience from sitting through the boy's dismantling. Piece by piece...

It's a real shame things turned out this way.

A mess has been made. There is no denying that. Now, the clean-up must begin. This is work. This is a business. Everyone's job has unpleasant aspects... tasks most would rather not ordeal. The meth business is no different. But this wasn't yet another Jesse Pinkman screw-up. Nor was this another vicious power-grab by Walt. Their mistake was simple: They trusted the wrong guy. 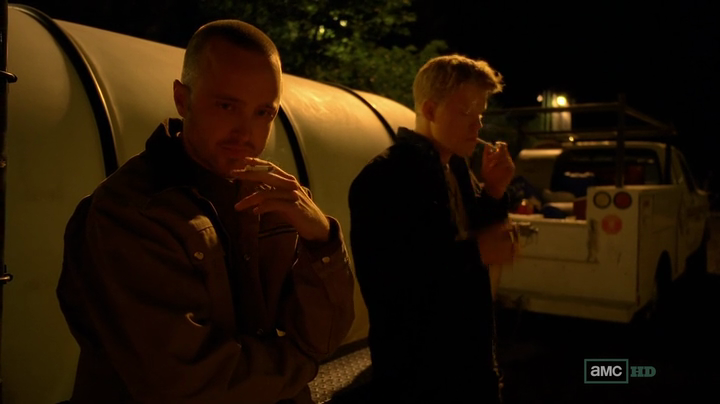 Or did he do the right thing? Was Todd the only one with the guts to do what was necessary? They all sold their personal ethics for giant handfuls of cash long, long ago. What's one more body on the pile? Outside, Jesse lights a cigarette as Todd ambles up. He attempts a joke, which Jesse ignores. Todd shrugs and tries a different approach. "Hey -- s*** happens, right?" Then, without a word, Jesse punches him in the face.

Remember Mike's much discussed "legacy costs"? His cronies in prison still need to be paid off, so their mouths remain shut. But now, things have crystallized in the realization that the child-murdering Todd is connected with those same cronies. They can't just fire him. He knows too much. They can't just kill him. He's connected. So, Todd will stay on the team. But, not without a grave warning from Mike.

Finally alone, Todd pulls something from his backpack. Something he has kept concealed this whole time: The spider in the jar. We get no indication whether or not he is keeping this as evidence -- Is it to be used a leverage? Or is it just a trophy from his latest kill?

Mike watches his grand-daughter climbing a tree in the park. This is stark contrast, coming only days after the disposal of the dirt bike kid. He notices that he is being watched by the DEA (as per usual). He quickly jots down a note and places it under the garbage can. Gomez and his new partner (replacing the newly-promoted Hank) froth with excitement when they see this. Mike takes the child and leaves the park. Gomez extracts the note, finding it to be nothing more than an Eff You. 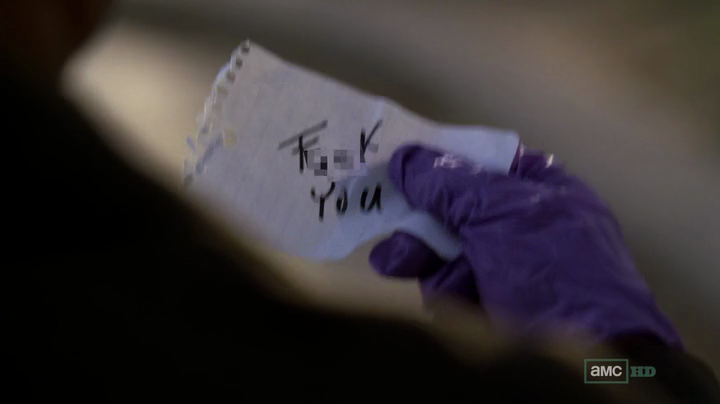 Back at home, Mike monitors Hank's phone lines, until he hears his own name mentioned. Mike is being watched very closely. This is a problem that requires immediate action. He sighs, exhausted.

Skyler cradles baby Holly as she chats with Marie. Soon, tears start flowing and Marie starts prying for information. Skyler remains mum. "There are things that... if you knew them about us... you'd never talk to me again." Marie assumes she is referring to the affair with Ted (that Walt heartlessly revealed to Marie in "51") and tries to comfort her, saying she already knows. Skyler is speechless, as her hatred for Walt grows.

Jesse and Walt eat lunch inside one of the "bug-bombed" houses, when a news report about the dirt bike kid comes on the TV. Jesse is shaken to the core. "It's just -- that kid's parents, man." Walt pats him on the back and gives him the rest of the day off. "I haven't slept the last few nights either -- just thinking about it." Walt says. Jesse nods and thanks Mr. White as he wipes tears from his eyes.

He quickly gets changed as Walt readies to complete the cook. But, as Pinkman is walking out, he suddenly stops, overhearing something: It's Walt. He's whistling. A mere two minutes after that conversation... Walter White is whistling a hap-happy tune. 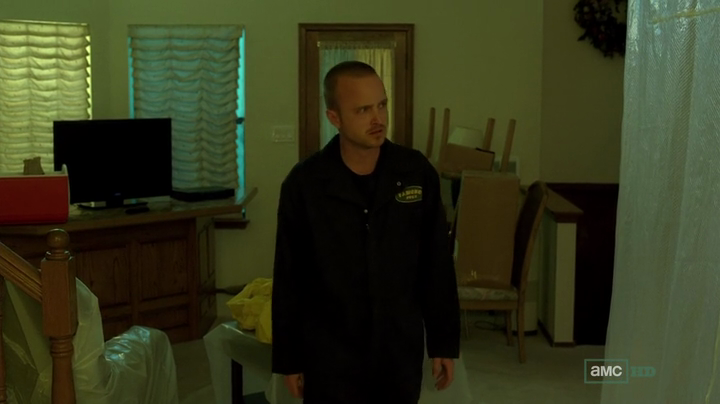 Walt's whistling could be a call-back to a story Mike told several episode's ago. The scumbag wife beater who hummed "Danny Boy" as he rode to the police station, drenched in his wife's blood.

The light in Jesse's eyes changes as he realizes, Mr. White is gone.

That bald dude in the biohazard suit... that's Heisenberg.

Mike and Jesse confront Walt. They both want out. They propose to sell the methylamine, each profiting $5 million in the process. Mike will even pay the legacy fees from his own pocket. Everybody wins! Walt shakes his head. He will keep his 1/3 for himself. Soon, a problem arises: Mike cannot sell 2/3's of the methylamine. It has to be all, or nothing. But Walt won't sell. Nothing is easy.

One of the most fascinating scenes is Jesse's dinner with Skyler and Walt, a moment that has been a-long-time-comin'. Jesse tries his best to compliment Skyler on her (store bought) cooking. But she will have none of it. She fills and refills her wine glass until the awkwardness ends. Walt could have prevented this debacle but, instead he passively let it play out, picking at his dinner. 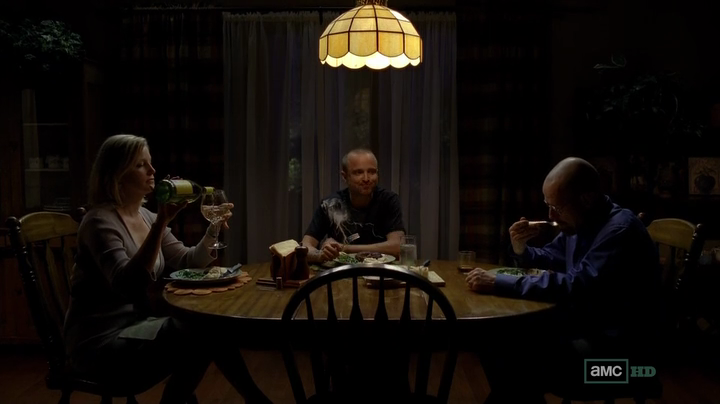 Knowing that the inevitable is coming, Walt decides to steal the methylamine himself but, is immediately caught by Mike. Luckily, Mike has an errand to run before the sale can happen. He leaves Walt zip-tied to the radiator, a very bad move on the part of this former cop, because Walt once again MacGyver's his way out of the zip-tie and absconds with the methylamine.

Mike's errand: He is filing a restraining order against Hank, Gomez and the entire DEA. Hank is appalled by this lame tactic. But Saul is right there to accuse them of stalking Mike. "He's just not that into you," Saul sneers, claiming that he has Judge Pappadomian in his back pocket, which means Hank and Gomez are screwed. They are forced to back off... for now. But later, Saul reminds Mike, "(Hank)'s hard-on for you just reached Uncle Milty proportions." This could get ugly.

Speaking of ugly, when Mike returns to find the methylamine gone, he snaps. He finds Walt and Jesse in the mechanic's office. Jesse tries to intervene but, is shoved away as Mike whips a pistol out, aiming it at Walt's head. 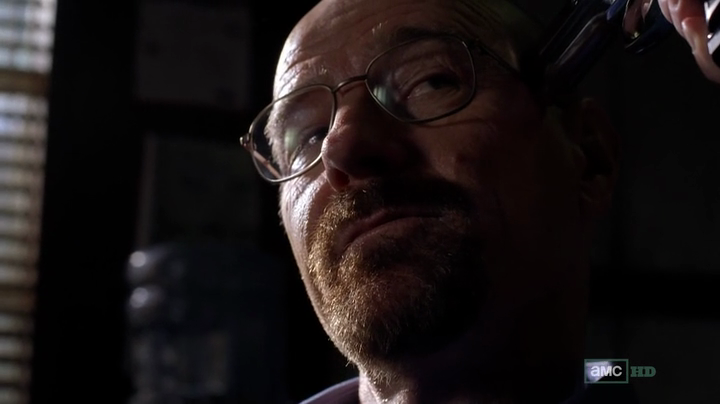 Jesse protests: "We both get our five million and he gets his methylamine! Just hear him out!"

And mind you-- Mike is the one with the gun.